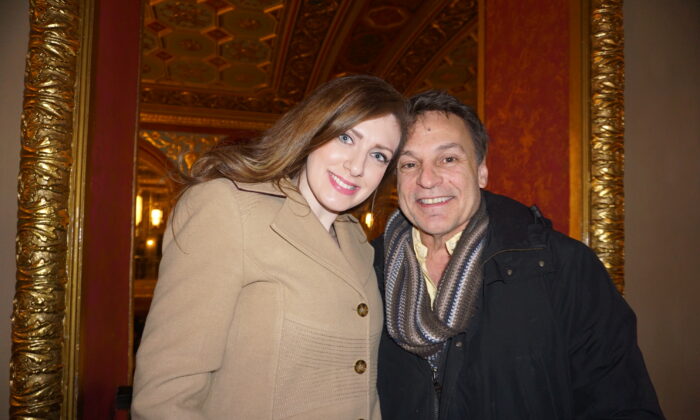 PROVIDENCE, Rhode Island—Another realm, another world, a higher reality—tales of heaven and supernatural beings permeate the world’s cultures and traditions and, Saturday night, they appeared on stage at the Providence Performing Arts Center where audience members delighted in seeing them, with one even saying she’d “be dreaming and thinking about it all night long.”

“It was beautiful. It was just so beautiful,” Alyssa Heller said about Shen Yun Performing Arts on Jan. 18, 2020.

“I probably won’t sleep tonight, I’ll be dreaming and thinking about it all night long. The color combinations, and the way the fabrics of the dresses flowed. … I felt the music through my body the whole time. I am feeling the music and I’m seeing the beautiful colors, and it was like I was in another world. A better world,” said Heller, a trained architect and graphic designer who now coordinates a local event for Rhode Island visitors and residents, Gallery Night in Providence.

“I very much felt the spirituality in the show. I’m Catholic. But, the words that the tenor was singing, it was like he was singing in my religion, too. It was very much what I believe,” Heller said.

The tenor sang a piece entitled “Clarity With Waking” whose lyrics outline the difference between atheism’s sinister intent and the Creator’s original intentions to save all of mankind from ruin.

“Overall impression, I loved it. This is the first time I have ever seen this show, and I loved all the vignettes. I learned a lot about each culture. It was beautiful, it was very beautiful,” Heller said.

Shen Yun sends seven touring companies around the world each year with an all-new performance. Heller is grateful they came to Providence, and encouraged the artists to let everyone in the world see the highly-acclaimed stage show they’ve created.

To Shen Yun’s artists, Heller said, “keep doing what you’re doing. It’s beautiful. It’s a story that needs to be told. Your passion shows through. Your love of life in telling the story just shines through your eyes and through your body movements. And everybody around the world deserves to see this. So, keep doing it.”

Shen Yun is based in New York and cannot perform in China today. The Chinese Communist Party has attempted to systematically destroy traditional Chinese culture since the days of the Cultural Revolution, seeing it as a threat to its own legitimacy. Communist party members even try to sabotage Shen Yun around the world, but as Heller’s words demonstrate, the power of Shen Yun cannot be repressed.

“I think it’s amazing, and I think that they really told the story well. I learned a lot that I didn’t know about the Chinese culture, and I learned that what they’re telling is important because they can’t even tell this story in their own country.”