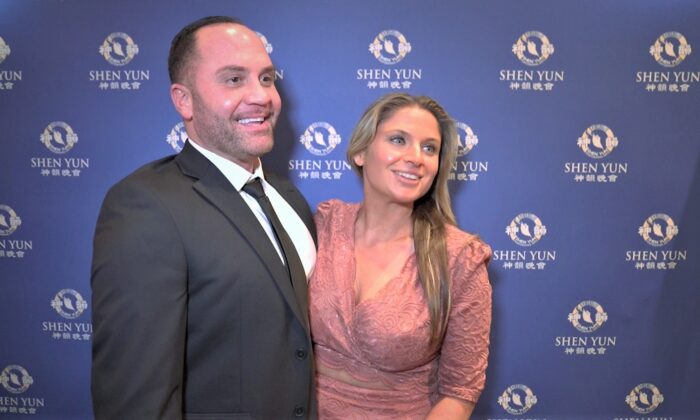 PHILADELPHIA—Universal values transcend time, culture, and race. Deeply rooted in the cultures of all people are ideas like good triumphs over evil, and love conquers all. For centuries, artists have sought to depict these values and uplift humanity through the arts. Today, Shen Yun Performing Arts does just this through the form of music and classical Chinese dance.

New York-based Shen Yun takes its audience through a journey of 5,000 years of Chinese culture through music and dance. Each dance piece displays the essence of the traditional Chinese culture’s core values, through stories from ancient times to the present day. Today in China, there is one group of people who stand out in their upholding these ancient values, and Shen Yun shares their story on stage.

For Joseph Campagna, who saw Shen Yun at Merriam Theater in Philadelphia on Feb. 21, 2020, the portrayal of this modern-day story left him in tears, and he came away from the performance with this message in his heart:

“I was very emotional … You see, you could feel love without it actually saying, love. And throughout the expression …  it transcends nationalities, time. There’s one concept—it’s love,” said Campagna, who works in wealth management.

He expressed that no matter what culture, goodness is transient. “Good transcends—It transcends time, it transcends people,” he added.

The depth and breadth of Shen Yun made Campagna emotional, and one particular story lingered in his mind.

Campagna said Shen Yun opened up his eyes, and through the artistry, made him feel intrigued and compassionate toward what was taking place in China.

“It’s done in a beautiful way and actually made me cry,” said Campagna.

Campagna said he loved the story and how Shen Yun portrayed it, emphasizing that he loved everything about it: “I do not love what is happening, but the message that’s coming across is beautiful,” he added.

Jessica Baliski, a speech language pathologist who attended Shen Yun with Campagna, felt Shen Yun was different because it expressed these stories through dance, and was able to express “things that we can’t really express in words.”

“China’s deep cultural traditions are contained in classical Chinese dance, allowing its movements to be richly expressive, such that the personalities and feelings of characters can be portrayed with unparalleled clarity. It is therefore capable of depicting scenes from any time period, whether ancient or modern, Eastern or Western, in a strikingly vivid way,” the website states.

Baliski said that she loved the dance and that she found it “humorous and loving and passionate, all in one.”

“I just love human expression, no matter what the facet. I found it [the dance] intriguing. I love every culture and I love how every different culture expresses themselves,” said Baliski.

Campagna shared that he is Catholic, but that no matter one’s nationality or denomination, you can relate to the stories that Shen Yun portrayed.

“There’s one message and it’s just expressed in different ways, all over the world. But there’s still that one message that goes through,” he said.

For Campagna, the message he interpreted was so touching because of the contrast between good and evil, which he referred to as like “yin and the yang.” For him, the good is so precious because of adversity and struggle. For this reason, he values the struggle too, because of the goodness it can forge.

“No matter what language, no matter what ethnicity you are, love is love, and good and evil will always be there. And in my heart, love always wins,” said Campagna.

Campagna expressed his admiration for the Shen Yun dancers:

“What they [the dancers] go through, the regimen, the whole training, is insane … You have to believe in something a lot to go through what they go through,” said Campagna.