Longevity Researcher: Shen Yun Contains Something That Will Live in Our Hearts Forever 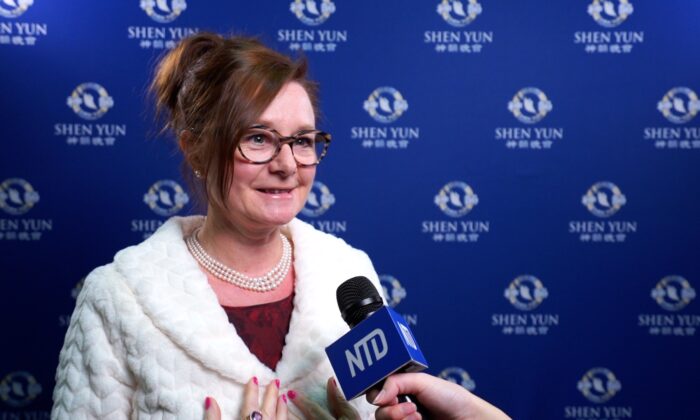 FRESNO, Calif.—Traditional Chinese culture is one of the world’s oldest living cultures. So it’s fitting that Katarzyna Dorosz, the founder and president of the Institute of Longevity in California, would turn to that civilization for tips on how to live a long and healthy life.

Dorosz did just that even before attending Shen Yun Performing Arts, a New York-based company that is spearheading the revival of that authentic, millennia-old culture through classical Chinese dance, bel canto singing techniques, original orchestral compositions, and couture costumes. It’s a show that Dorosz urged everyone in the world to see and that she says she will always have in her heart. In addition, she saw many longevity principles and healthy living practices on stage at Shen Yun’s performance at the William Saroyan Theatre on Feb. 7, 2020.

“I am very impress[ed],” said Dorosz, who is originally from Poland. “I am so happy for this beautiful performance. I wait[ed for] this performance for many, many months and I miss this so much. I see the beautiful advertising in TV, and today, I am in my dream and this is so amazing.”

Dorosz, who served as the former president of Fresno’s Chamber of Commerce, has worked in television and media and is an author. She shared that she feels close to the traditional Chinese culture, having read much of Chinese history, and when she was writing her book on longevity, she turned to this culture for inspiration.

Shen Yun depicts the essence of China’s true culture on stage, which is deeply spiritual. Spiritual practices that have encouraged health and longevity such as Buddhism, Daoism, and Falun Dafa feature in the performance’s roughly 20 short storytelling dances. Falun Dafa is an ancient meditation practice that also encompasses the moral principles of truthfulness, compassion, and tolerance.

“Everything which I read, which I learn, I thinking what I know about this culture, it’s here in this time when I sit and I watch [Shen Yun]. It’s amazing,” she said. “And we have everything in the performance and this is so much, so much beautiful for me. It’s, it’s wonderful.”

Classical Chinese dance is renowned for being a profoundly lyrical and expressive art form that developed in the courts of the ancient dynasties, and that has roots in martial arts. Shen Yun’s dancers are recognized around the world as paragons in this art form. They attribute their skills and artistry in large part to Falun Dafa, which they practice in their everyday lives.

“The choreography, the flexibility, the body—and I know how many hours these people need to spend and exercise every day [to]  give us the beautiful show. I’ve been many times in [other] show[s] but I’ve never seen nothing what is the beautiful like this,” Dorosz said.

She reiterated how impressed she was that she saw so much of China’s rich and storied culture in this one performance.

“I read before I come into this performance about history, Chinese. Everything, every detail, from a past time, it’s one to one and we don’t need to read. We just sit in the chair and we see and we understand,” she said, describing how enjoyable it was for her to absorb so much she would otherwise have to read in books or through lectures.

“I am very sensitive today, but now I think I am in the sky thanks to this performance, thanks to the beautiful dancing. Thank you so much,” she said to the show’s organizers and Shen Yun’s artists.

“I am originally from Poland. I want invite to everybody in the world, especially Polish people, American people, to the beautiful [Shen Yun] performance. Please, where you have chance, come here buy the ticket and enjoy the time. Especially when this history, China, we see what is extremely beautiful,” she said.

When you come to this today and you see this performance, you never be died [you’ll never really die] because you see something what’s always have in your heart.
— Katarzyna Dorosz

To describe Shen Yun in a single sentence, Dorosz quoted the Latin phrase “non omnis moriar” or “I shall not wholly die.”

“When you come to this today and you see this performance, you never be died [you’ll never really die] because you see something what’s always have in your heart.”