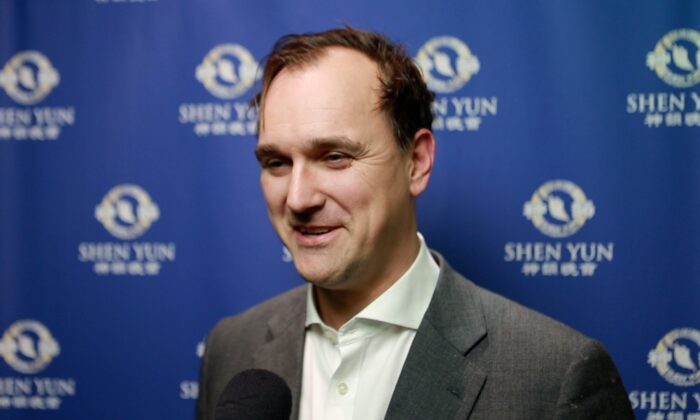 LONDON, U.K.—In a time when traditional Chinese culture is not as prevalent as it used to be and is suppressed by the Chinese Communist regime, Shen Yun Performing Arts is turning the tide through classical Chinese dance and music.

“I think it’s absolutely superb. It’s incredibly beautiful and shows the huge tradition that exists, subsists, from Chinese culture,” said Frankopan, who enjoyed the beauty of the performance and the mirroring of nature.

Spanning across 5,000 years, China’s traditional culture was comprised of customs, values, and beliefs that were passed down over the generations which helped preserve the character of the Chinese people and their understanding of the universe. These concepts included compassion, integrity, and veneration for the divine.

That all came to an end in the middle of the 20th century. The ideology known as communism made its way into China from the Soviet Union and eventually took control. From that moment forward, many campaigns and movements were launched by the Chinese Communist Party to eradicate anything even remotely close to traditional Chinese culture. People were attacked for following their spiritual beliefs, history books were rewritten, and China became a shell of what it once was.

China’s true sense of identity and place of origin was on the verge of disappearing forever. But in 2006, a group of classical Chinese artists in New York united under one mission: to revive traditional Chinese culture and share it with the rest of the world. They thus founded Shen Yun.

Shen Yun now has seven companies touring around the globe simultaneously and is touching the hearts of many people.

Frankopan said, “Well, the tradition is what makes us what we are, and everyone should be proud of their traditions and it’s nice to see some Chinese traditions preserved for posterity.”

Well, modern society is looking for answers that they actually already have from the past.
— Nicholas Frankopan

An important aspect of Shen Yun Performing Arts is that the artists not only showcase traditional Chinese culture, but they also live by it every day, in all areas of their life.

One prominent traditional Chinese principle that they observe is the principle of self-cultivation or the improvement of oneself.

According to the company’s website, Shen Yun performers cultivate their hearts by adhering to principles of truthfulness, compassion, and tolerance, and they believe that this is the way to create art that is beautiful and sublime.

Frankopan said, “I think it’s really impressive the commitment they’ve made to both their art and to their dancing, but also to the values that underpin that. That’s clearly under threat in their home country and it’s nice that they are making a stand by standing up for what’s right and clearly for freedom of expression and their traditions.”

The results of their cultivating virtue were evident on stage.

“It was amazing. It was totally fluid and calming as well as you saw, an inner grace which is unlike anything else I’ve seen,” Frankopan said.

With reporting by NTD Television and Don Tran.