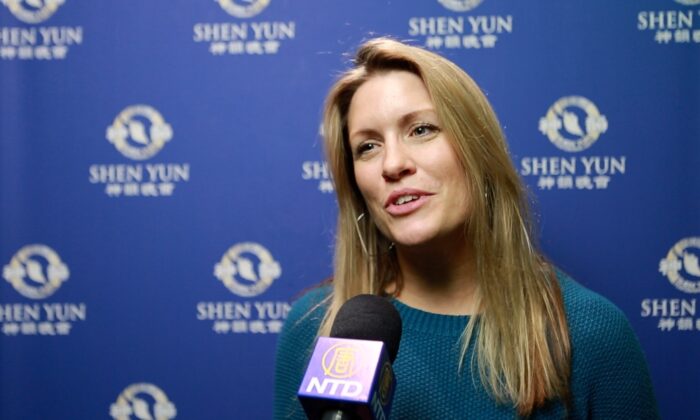 LONDON—The curtain rose in London on Shen Yun Performing Arts for the first time this season and metropolitan guests from many sectors found the classical Chinese dance performance to be phenomenal. On Jan. 17, 2020, New York-based Shen Yun opened a series of nearly a dozen performances at the Hammersmith Apollo, all of which are sold out or almost sold out.

Pippa Taylor is the producer and co-presenter of the Chris Moyles Show on Radio X. She loved Shen Yun’s artistry, stories, and emotions.

The radio personality said tears came to her eyes on a few occasions while watching Shen Yun.

“The performers, they’ve got such an array of talent. So they’re not just dancers. They’re actors, they’re acrobats, they’re so expressive. There’s lots of feelings involved, and that comes across. And that’s a real talent to be able to do that. I actually got a little bit teary at one point, just like, yeah a little bit, something got caught in my eye,” Taylor said with a laugh.

“I get quite emotional sometimes at the spectacle of it all and how gorgeous all the dancers are. They’re so dainty and they move so fluid. They move like water along the stage and it’s so lovely to watch. So elegant. So flexible!”

Tears came to her eyes again during the piece titled “Abetting the Wicked,” about two brothers in modern-day China who find themselves enmeshed in a brutal persecution.

“You really feel it. And it’s only really in such a short space of time they manage to get across such intricate detail and emotion. It’s really powerful,” Taylor said.

“You can’t help but get swept up with it all. It makes me want to learn to dance myself. I’m thinking how can I make myself more like them! Maybe I’ll take up some Chinese dance classes,” she added.

“I think it brings more awareness and more, kind of light and grace and elegance and faith. It kind of brings all that pureness. You get so caught up in your busy lives and it just kind of brings an air of grace to everyone in the audience. So I think everyone is going to leave feeling empowered and at peace maybe when they go. It’s a lovely experience. We’re loving it.”

Taylor encouraged everyone to try to see Shen Yun and said she would like to post about it on Instagram. “I think just a real powerful, moving, colorful, spectacular performance. You’ll have never seen anything like it. It’s something extraordinary. I’ll recommend it. Definitely.”

“Mesmerizing” is how Councillor Daryl Brown, the Mayor of the London Borough of Hammersmith & Fulham, described the evening’s Shen Yun performance.

“The performance was out of this world. It was mesmerizing. I’ve never seen such color, such beauty, and perfection. I’d recommend anyone to come to the show,” Brown said, adding that she agrees with the widely-held view that Shen Yun is world-renowned, and for good reason: “very high standard.”

“I absolutely adored to the screen behind the dancers. It was magical, that’s all that I can say. Absolutely could not enjoy the evening any more than I did. So I thank you very much.

“Stepping back into time is not something that we see every day here. And experiencing the Chinese culture was new to me. So I really enjoyed it. It was stunning. Very exciting,” Brown said.

Shen Yun’s patented digital backdrop stood out to Mayor Brown the most, she said, but also “the perfection of the dancing, the humor, the beauty, everything. And this storytelling was rather perfect. Easy to follow, to be honest.”

“It’s very inspiring and it’s very spiritual. And I noticed the word ‘God’ upon the screen. I thought that was rather nice and rather unusual. To be honest. I don’t see that often. So I thought that was very special. Everything was magical. It brought feelings out of me that I haven’t been in touch with for a long time. So I thought that was really nice, for I felt very relaxed. I felt very relaxed there. And I feeling I’m walking away with something. So that’s probably a gift. I’m receiving a spiritual gift. So I’m going to share with others, I think. I’m just in a very good mood,” Brown said.

Shen Yun is comprised of seven touring groups that travel the world each year, sharing authentic Chinese art forms and culture that was once lost.

“It most certainly brings us in touch with the Chinese culture, which is very important. We’ve got quite a large Chinese culture, community, I should say, in Hammersmith & Fulham, and all of a sudden, I see it. So it’s brought the culture here and it’s exposing us to something that we actually don’t see too often. So, very happy to be here tonight,” she added.

Lloyd’s of London has been operating out of Britain’s capital for 325 years. Tonight, the Head of Claims for one of its underwriters attended Shen Yun and applauded the group’s effort to bring true Chinese culture to the world.

Many, including Riddington, tout Shen Yun’s educational aspect and enjoy reading about topics they hadn’t learned about before by reading the program and hearing from the emcees.

“All of the dances are put into perspective, in terms of the culture and the place, and everything else, it was very informative in that respect,” Riddington said.

Riddington gleaned insights into modern China that evening as well as the country’s ancient dynasties.

“And not knowing a great deal about the company, it’s interesting to see the context on how and where it’s emerged from,” he added, referring to Shen Yun’s station in the United States, where the artists found artistic freedom to pursue their crafts and revive traditional Chinese culture. They cannot perform in China today due to the persecution against traditions, including the spiritual discipline they practice, Falun Dafa.

“There’s the depth of the faith as well, which is interesting,” he added.

In addition, Shen Yun’s unique orchestra that blends Eastern and Western traditions stood out to Riddington, who didn’t realize he would be hearing the orchestra live.

“Oh, they’re good; they’re very good,” he said. “They’re very capable, and it’s all live music, which makes a difference to the performance.”

With reporting by NTD Television, Xiao Min, and Brett Featherstone.