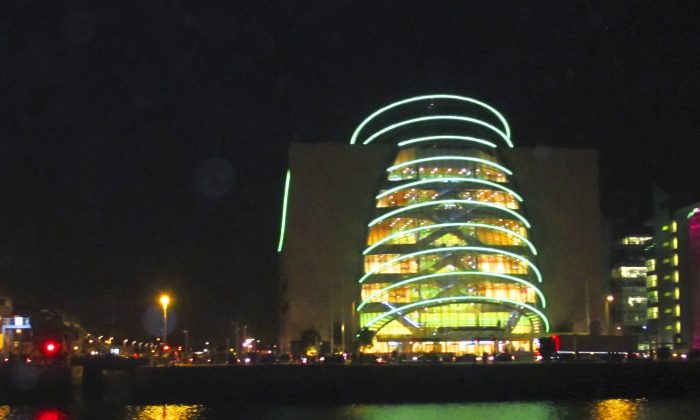 DUBLIN—”I was really impressed with the show, it was one of the best shows I have ever seen in my life,” was how local official, Councillor Paddy Kennedy described Shen Yun’s grand finale in The Convention Centre Dublin (CCD).

Commenting on the educational aspect of the performance Mr. Kennedy said “I learned a lot, particularly about the fact that they [Falun Dafa] are fighting their own battle in China and I do understand that. I am very close to the Chinese people especially the ones who live in Newbridge and I know the battle that they have had in their country.”

Chinese culture is a 5,000-year-old ancient heritage enriched by principles such as benevolence, justice, wisdom, propriety, and respect for the heavens.

Mr. Kennedy found Shen Yun to have spiritual aspects, “sometimes if things are too spiritual it can frighten you but that didn’t frighten me.”

Mr. Kennedy was also saddened to hear that people in China can’t see such a beautiful performance.

“It can make you feel sad that there is that problem in China, their own people are not allowed to choose religious wise or have that freedom,” he said.

According to Shen Yun audience members are often surprised to hear that Shen Yun cannot be seen in China today. In fact, there is no other performance like it in China today.

On the opening night of Shen Yun’s two-show visit to Dublin on March 26, the Dougan family (Emer, Áine and Colm) said that they greatly enjoyed the beauty of the show.

‘I was nearly moved to tears’

A technician at high-tech chip-maker Intel Ireland, Colm Dougan said he was almost moved to tears by the performance.

“It was absolutely beautiful,” he said, “I was nearly moved to tears. The Chinese —I didn’t know the Chinese culture and history was so rich, and that it stretched back 5,000 years. I was absolutely bowled over—it was fantastic.”

Emer Dougan said that as a spiritual person, she was moved by aspect of the Divine Creator expressed in one of Shen Yun’s dances, which showed scenes from China’s Zhou Dynasty.

Her professional role as an extra in a wide range of films and television series gives Emer Dougan a special insight into costumes and the performing arts, and Shen Yun presented traditional Chinese culture to her in a new and fascinating manner. “It’s such a colourful culture, and it’s a beautiful country as well,” she said.

Emer, Áine and Colm all spoke of having Chinese friends and business contacts, and they were dismayed to discover that, due to the cultural repression of the Chinese regime, it is not possible for Shen Yun to perform in China today.

“I think it’s absolutely crazy!” said Áine Dougan. “I think the Chinese government should be very ashamed—it’s such a good show, and it should be promoted more,” she said.

With Shen Yun Performing Arts serving as a Renaissance of traditional Chinese culture, Colm Dougan said he found the loss of cultural awareness among the Chinese since the Cultural Revolution shocking. “It’s very sad, I think. That show should go on tour in China, and all the Chinese people should be educated about their history,” he said. “The background and the costumes, they were absolutely fantastic. I’d go again!”

Áine Dougan was even more forthright: “I’ll definitely come next year!” she said. “We’re going to tell our Chinese friends—I’d say to them: ‘You missed a fantastic night, and being Chinese, you should be very, very, very proud. And you have to come next year!'”

“Your eyes will be opened!” said Colm Dougan.