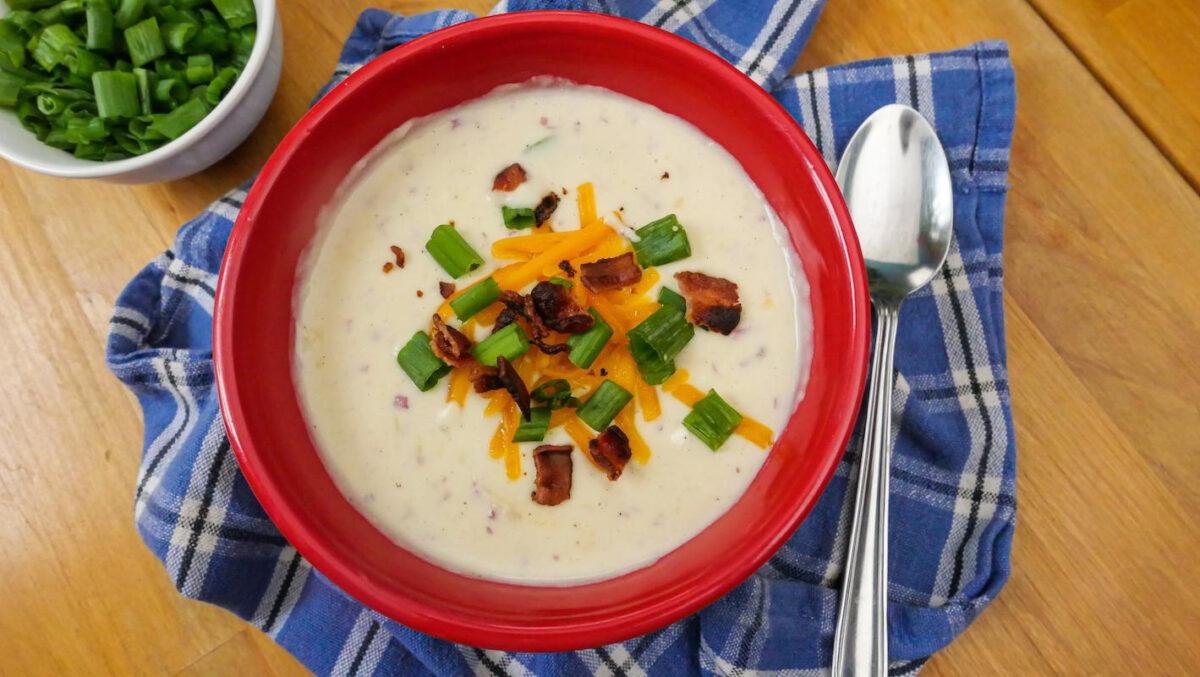 Hearty soups like this one can be so comforting as the weather cools down. (Jacqui Wedewer/The Daily Meal)
Food

Sure, the season may officially be called autumn, but the months of September, October, November and December may as well be called soup season in our book. From chicken noodle and chili to beer cheese, minestrone and everything in between, we cannot get enough soups and stews in the fall. And while those soups are all fine and good and comforting, there’s one soup that may just be the MVP of fall comfort foods: Loaded Potato Soup.

Potatoes often play backup on the weeknight dinner plate, with mashed potatoes, baked potatoes and scalloped potatoes serving as accompaniments to chicken entrees or other weeknight staples. But spuds are the star in this creamy soup.

To make this soup, first cook bacon and render its fat in a heavy-bottomed pot or Dutch oven. Then use all that scrumptious bacon fat to cook aromatics like garlic, celery and onion. Next, season everything generously with cayenne, garlic powder, salt and pepper before adding in the potatoes, cream and milk and let everything simmer together to maximize flavor. If you want, play around with the seasonings and customize this soup to your palate. Dried oregano, thyme or parsley could also be delicious and hearty additions.

Add more creamy goodness with cheese and sour cream, then blend everything together with an immersion blender, top with that bacon you cooked earlier, scallions, more cheese and maybe even a little more sour cream. After all, this is comfort food — go wild with the toppings.

If you’re using this recipe to dip into a massive 10-pound bag or potatoes you bought at the grocery store and still find you have more left, consider cooking up tornado potatoes, potato salad and more of our best potato recipes.

Step 1: In a large heavy-bottomed pot, cook 5 strips of bacon until crispy. Remove bacon from the pot and transfer to a paper-towel lined plate.

Step 2: Leave bacon grease in the pot and add 1 tablespoon of butter or olive oil if necessary. Add 1 chopped onion and 3 cloves of minced garlic to the pot and saute for 2-3 minutes. Add 3 stalks of chopped celery and keep cooking over medium-high heat until tender.

Step 3: Make a quarter-sized open spot in the pot and pour 1 tablespoon olive oil onto that spot followed by 1 tablespoon each of garlic powder and cayenne. Let the spices toast for 30 seconds, then mix well with vegetables.

Step 6: While the soup cooks, chop the bacon strips into small bits and set aside.

Step 7: After cooking, blend the soup with an immersion blender or mash into a chunkier soup with a potato masher.