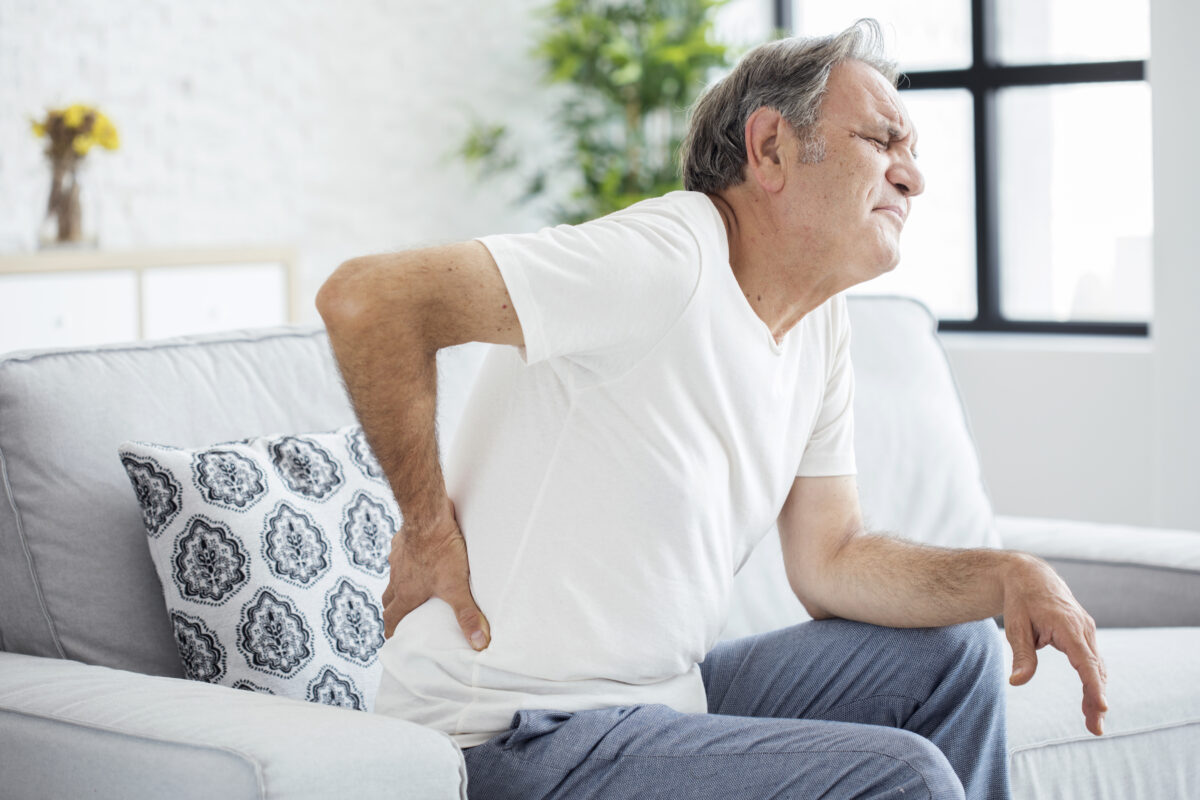 Linked to Low Back Pain, This Deficiency Can Be Ruinous

And if you ever get achy bones, infections, headaches, migraines, forgetfulness or head sweating – please get this checked.

Vitamin D deficiency is incredibly common around the world, but many mistakenly believe they aren’t at risk because they consume vitamin D-fortified foods, such as milk. However, few foods have therapeutic levels of vitamin D naturally, and even fortified foods do not contain enough vitamin D to support your health needs.

Despite its name, vitamin D is actually a steroid hormone that you obtain primarily through sun exposure, not via your diet. Since most dermatologists and other doctors recommend avoiding the sun and using sunscreen before venturing outdoors, vitamin D deficiency has reached truly epidemic proportions around the world.

Unfortunately, while the justification for sun avoidance is that it may reduce your risk of skin cancer, by avoiding sun exposure you risk vitamin D deficiency, which in turn raises your risk for many cancers — not only internal ones but also skin cancer, as well as a whole host of chronic diseases.

Considering the importance of vitamin D for disease prevention, strict sun avoidance is likely doing far more harm than good. The major problem with sun exposure is burning, not overall exposure. And, the easily treatable forms of skin cancer — squamous and basal cell carcinomas — are the ones most likely to form.

Calling someone with a vitamin D level of less than 20 ng/ml vitamin D deficient is like calling someone over 400 pounds simply overweight — in both cases a grossly serious understatement.

Seventy-five percent of American adults and teens are deficient in vitamin D when a sufficiency level of 30 ng/mL is used. If the sufficiency cutoff were to be moved to 40 to 60 ng/mL, sufficiency rates in the U.S. would likely be in the high 90% bracket.

It’s important to realize that 20 ng/mL has repeatedly been shown to be grossly insufficient for good health and disease prevention and, really, anything below 40 ng/mL (100 nmol/L) should be suspect. For example, research has shown that once you reach a minimum serum vitamin D level of 40 ng/mL, your risk for cancer diminishes by 67%, compared to having a level of 20 ng/mL or less.

Several studies also show that these higher vitamin D levels are protective against breast cancer specifically. Importantly, a 2005 study showed women with vitamin D levels above 60 ng/mL have an 83% lower risk of breast cancer than those below 20 ng/mL! I cannot think of any other strategy that can offer that kind of risk reduction.

More recently, a pooled analysis published in June 2018 of two randomized trials and a prospective cohort study came to a near-identical conclusion. The objective was to assess whether there are any benefits to having a vitamin D level above 40 ng/mL, as most studies do not venture into these higher levels.

Indeed, mirroring the 2005 findings, women with vitamin D levels at or above 60 ng/mL had an 82% lower incidence rate of breast cancer than those with levels of 20 ng/mL or less. Published research by GrassrootsHealth reveal as much as 80% of all breast cancer incidence could be prevented simply by optimizing vitamin D and nothing else.

The only way to definitively identify vitamin D deficiency is via blood testing. However, there are some general signs and symptoms to be aware of as well. If any of the following apply to you, you should get your vitamin D levels tested sooner than later, and take proactive steps to boost your level into the 60 to 80 ng/mL range:

1. Ongoing musculoskeletal pain and achy bones — According to vitamin D researcher Dr. Michael Holick, whom I interviewed a few years ago, many who see their doctor for aches and pains, especially in combination with fatigue, end up being misdiagnosed as having fibromyalgia or chronic fatigue syndrome.

2. Frequent illness/infections — Vitamin D regulates the expression of genes that influence your immune system to attack and destroy bacteria and viruses, so frequent illness and infections of all kinds, including colds and flu, is a tipoff that your immune function is subpar, which likely means you’re low on vitamin D.

3. Neurological symptoms — This includes depression, feeling blue, cognitive impairment, headaches and migraines. In 2006, scientists evaluated the effects of vitamin D on the mental health of 80 elderly patients and found those with the lowest levels of vitamin D were 11 times more prone to be depressed than those who received healthy doses.

Her symptoms resolved once she raised it to 39 ng/mL. Another study found women with vitamin D levels below 29 ng/mL were more likely to complain of fatigue than those with levels above 30 ng/mL.

Several factors will influence your risk for vitamin D deficiency, including the following:

Optimizing your vitamin D levels has been shown to have a powerful effect on health, helping protect against a wide variety of diseases. Among them:

Evidence showing vitamin D lowers your risk of SARS-CoV-2 infection, hospitalization, severe complications and death continues to mount, with study after study showing that your vitamin D status before you become infected can greatly affect not only your risk of getting COVID, but how well you recover (or don’t) from it.

Included in those studies is a scientific review in the journal Nutrients, which I co-wrote with William Grant, Ph.D., and Dr. Carol Wagner, both of whom are part of the GrassrootsHealth expert vitamin D panel. We found that at least 14 observational studies offer evidence that serum 25-hydroxyvitamin D concentrations are inversely correlated with the incidence or severity of COVID-19.

The evidence to date generally satisfies Hill’s criteria for causality in a biological system, namely, strength of association, consistency, temporality, biological gradient, plausibility (e.g., mechanisms), and coherence, although experimental verification is lacking. Thus, the evidence seems strong enough that people and physicians can use or recommend vitamin D supplements to prevent or treat COVID-19 in light of their safety and wide therapeutic window.

As of October 31, 2021, our paper, “Evidence Regarding Vitamin D and Risk of COVID-19 and Its Severity” — which you can download and read for free — was the second most downloaded study from this journal in the previous 12 months. It was also No. 2 in citations and No. 4 for views.

In January 2022 Mayo Clinic research on vitamin D was featured by WEAU 13 News in Wisconsin. The clinic’s list of conditions affected by vitamin D include:

Regular, sensible sun exposure is the best way to optimize your vitamin D status, but many will need to take an oral vitamin D3 supplement, especially during winter months.

The only way to gauge whether you might need to supplement, and how much, is to get your level tested, ideally twice a year, in the early spring, after the winter, and early fall when you level is at its peak and low point. This is particularly important if you’re pregnant or planning a pregnancy, or if you have cancer.

Again, the level you’re aiming for is between 60 and 80 ng/mL, with 40 ng/mL being the low cutoff point for sufficiency to prevent a wide range of diseases, including cancer.

GrassrootsHealth makes testing easy by offering an inexpensive vitamin D testing kit as part of its consumer-sponsored research. By signing up, you are helping further vital health research that can help millions in coming years. (All revenues from these kits go directly to GrassrootsHealth. I make no profit from these kits and only provide them as a service of convenience to my readers.)

Research suggests it would require 9,600 IUs of vitamin D per day to get 97% of the population to reach 40 ng/mL, but individual requirements can vary widely, and you need to take whatever dosage required to get you into the optimal range.

In 2018 I interviewed Carole Baggerly, director and founder of GrassrootsHealth, a nonprofit public health research organization dedicated to moving public health messages regarding vitamin D from research into practice, and she said:

“Our first paper, published in 2011, showed the dose response relationship. You can easily see that two people taking the same dose (e.g., 4,000 IU/day) could have very different results. That’s why testing … is so important.”

If you’ve been taking a certain amount of vitamin D3 for a number of months and retesting reveals you’re still not within the recommended range, then you know you need to increase your dosage.

Over time, with continued testing, you’ll find your individual sweet spot and have a good idea of how much you need to take to maintain an ideal level year-round. GrassrootsHealth also has an online vitamin D calculator you can use to estimate your vitamin D3 dosage once you know your current serum level.

Aside from determining your ideal dose of vitamin D3, you also need to make sure you’re getting enough vitamin K2 (to avoid complications associated with excessive calcification in your arteries), calcium and magnesium.

This may actually help explain why many need rather high doses of vitamin D to optimize their levels. According to this scientific review, as many as 50% of Americans taking vitamin D supplements may not get significant benefit due to insufficient magnesium levels.

On the other hand, when you have an optimal magnesium level, your vitamin D level will rise even if you’re taking a much lower dose.53 In fact, previous research54 has indicated that higher magnesium intake helps reduce your risk of vitamin D deficiency — likely by activating more of it.

This article was previously published January 1, 2019, and has been updated with new information.