Legislator: Shen Yun Is Magical and Never Gets Old 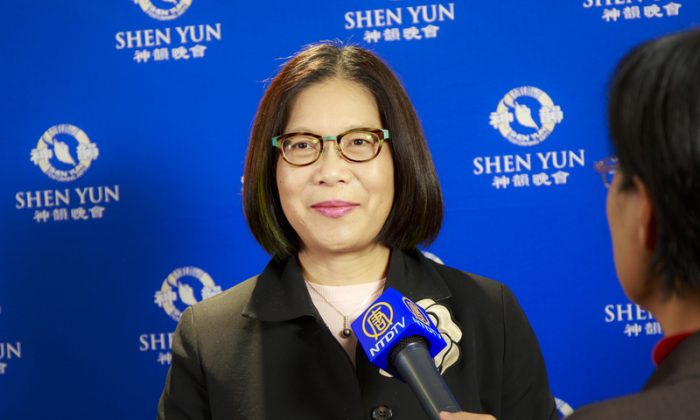 “Artistically Shen Yun has just made another great stride forward, most notably the skill of the dancers and their costumes. It just becomes more exquisite year after year,” said Ms. Kuan, who was among the sold-out crowd at Kaohsiung Cultural Center on March 26. She recalled that her first encounter with Shen Yun was with former Taiwan President Lee Tenghui and his wife in Taipei.

The show was magical in the sense that the “valuable virtues of truthfulness, compassion, and tolerance are clearly conveyed,” according to Ms. Kuan, who also said that the the hi-tech backdrop was seamlessly coordinated with the performers.

The animated backdrop is one of Shen Yun’s most unique features, which allow the audience a miraculous feeling of transcending time and space, as if they were on the scene in person.

Ms. Kuan was happy to see Shen Yun back in Kaohsiung and she expressed the hope that the city would continue welcoming the dancing company every year. “I am also pleased to learn that it has a full house for every performance here. It’s great that such artistic feats and important values are shared with people here in Kaohsiung.”

As to the program depicting Chinese Falun Gong practitioners’ perseverance, despite the persecution they are facing today, she said, “Belief is power.”

“Shen Yun is spreading the message of kindness to the society, helping people to become more compassionate, and ushering in positive energy,” a military general Chen said, after he and his wife saw the spectacular performance the same day.

Praising Shen Yun’s unique backdrops, he said, “The synchronization of digital animated backdrops and the performance on the stage was perfect. It was my first time to see such a magnificent performance. It’s indeed truly superb!”

“The plots were adapted from stories that are familiar to us, but historic and legendary stories are difficult to perform solely through dancing. Nevertheless, Shen Yun made it wonderful,” the general noted.

“In addition, these performers’ body movements and gestures were very graceful,” he added. “I could clearly see dancers’ facial expressions, and perceive their conscientiousness.”

“I believe Shen Yun’s choreographers must profoundly understand the entire Chinese history and culture in order to come up with each program perfectly,” the general said.