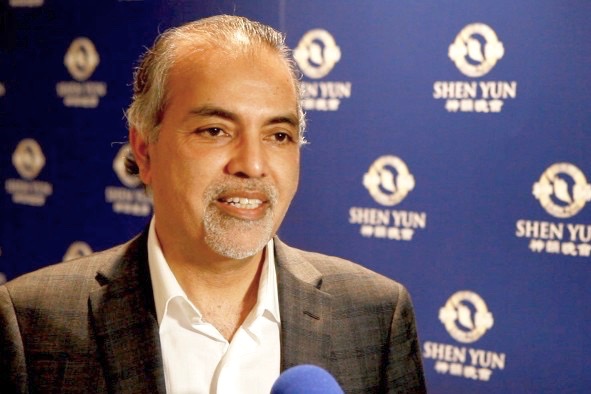 VANCOUVER, Canada— Entrepreneur and well-known community activist Barj Dhahan saw Shen Yun Performing Arts for the first time on Jan. 22 at the Queen Elizabeth Theatre, and he was deeply impressed.

“This is my first time here with my wife, and we just find it very unique and very graceful,” he said about the classical Chinese dance and music company. “The dancers are very graceful, very inspiring.”

The performance, created by Shen Yun’s leading classical Chinese artists who are based in New York where they enjoy artistic freedom, allowed Mr. Dhahan to learn about China’s divinely inspired culture.

“This whole focus on the power of the divine in its culture, in its art, in its expressions, that is something very unique.”

China, according to the Shen Yun website, has been known as the “Celestial Empire,” not only because of its strength and position since ancient times, but because of a deep belief that it is a land where the divine and mortal once coexisted.

“It refers to the belief that the divine, through various dynasties, transmitted a rich and abundant culture to the Chinese people. Chinese culture is thus known as ‘divinely inspired,’ and is the only culture in the world to have a continuous recorded history of 5,000 years,” says the website.

The presentation of these deep contents is what makes Shen Yun particularly special, Mr. Dhahan said.

The divine is really the essence of the universe.
— Barj Dhahan

“The divine is really the essence of the universe. So, for Chinese ancient culture, it traces back its roots to that, it’s inspired by the divine, the creator, the power in the universe, and that way I think it’s also very unique and special,” he said.

Shen Yun, Mr. Dhahan said, creates an opportunity to celebrate the rich culture of China, and present profound universal virtues such as truthfulness, compassion, and forbearance.

“When the focus is on truth and compassion, that is exactly what we need in the world today,” he said.

“I think China’s ancient culture can be very effective and very influential today in the world.”