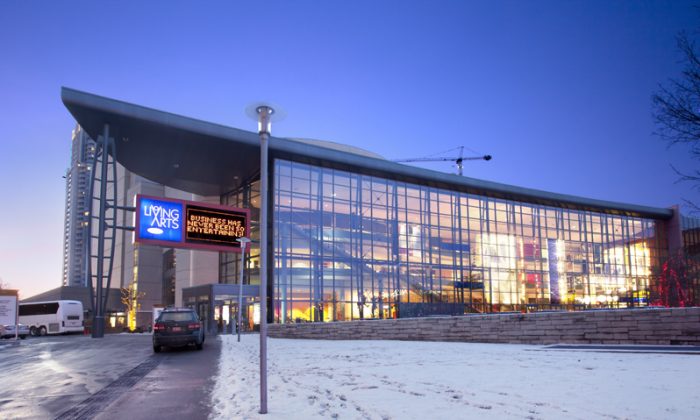 MISSISSAUGA, Canada—George Anastasopoulos and his wife, Angèle Desgagné, greatly appreciated the spirituality and meaning behind Shen Yun’s performance at the Living Arts Centre on Saturday night.

Their children bought them tickets and the couple from nearby Oakville heaped praise on the classical Chinese dance and music company.

“It’s been a terrific performance, the dancers are amazing,” said Mr. Anastasopoulos, a leadership sales coach and trainer. He is a veteran of the business world with a 20-year corporate career in sales, marketing, and general management roles. He has worked with high-profile teams in companies like Pepsi-Cola, General Mills, and Bausch & Lomb.

“The costumes are beautiful, the whole thing is very, very graceful,” said Ms. Desgagné. She is a certified image professional and founder of Imagélite International.

Shen Yun’s group dances impressed the couple immensely. Mr. Anastasopoulos could see the artistry in what the dancers were doing.

“I think the dancers are painting a picture on stage. They’re artistic, so as beautiful as the dance is, it’s artistically beautiful,” he said.

The spiritual aspect of the ancient Chinese culture made a strong impression on the couple.

One presentation they spoke about was “The Power of Compassion,” in which a police officer attempts to arrest people practicing the spiritual meditation discipline Falun Gong (also called Falun Dafa). The policeman injures his leg in the process and the practitioners of Falun Gong help him recover after receiving blessings from heavenly beings.

“We’re spiritual beings, you know. Truth, compassion, and tolerance, they demonstrated that through their dance and it integrated with the backdrop, and quite honestly, we’re not watching the performance, we’re in the performance,” said Mr. Anastasopoulos.

The couple truly felt like they were part of performance on the stage, with the help of the digitally animated backdrops that seem to extend the stage.

Ms. Desgagné explained what she took away from “The Power of Compassion”: “Just to make you realize that there is always somebody that’s in a worse situation than you are, and just to be compassionate about their situation and trying to help them, so it’s just beautiful.”

“That even someone who’s trying to hurt you, they’re probably hurting more than what they’re doing to you, and so they could use a little compassion too,” continued Mr. Anastasopoulos.

Shen Yun’s performance includes 21 individual acts, which are introduced by two masters of ceremonies speaking English and Chinese. They enhanced the performance by providing explanations about classical Chinese dance as well as the instruments in Shen Yun’s unique orchestra.

Reporting by Sound of Hope and Rahul Vaidyanath