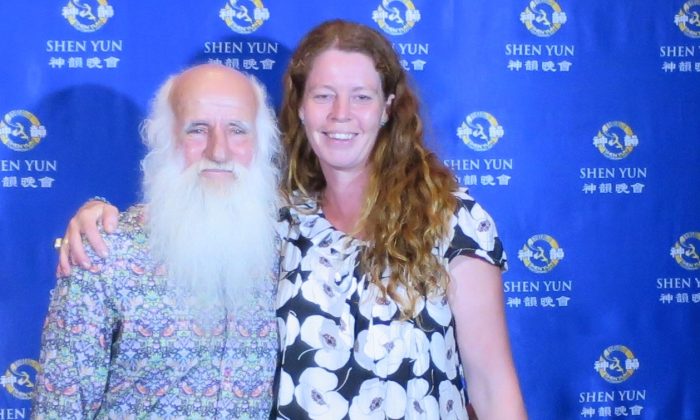 BRISBANE, Australia—Audience members were struck by the powerful message of compassion present in all the pieces at the Shen Yun Performance Arts performance on Feb. 4, at the Concert Hall, QPAC.

“It was very powerful, the vision and the dance and how it all came together in a visual feast with a message which is really awesome,” said Juud Addison who came to see Shen Yun with her husband Henry.

The Addison’s are a husband and wife landscape duo and care for all the gardens in their neighbourhood. Both were particularly moved by the divinity displayed in the performance.

“A lot of compassion runs through the whole thing I feel, and the compassion message was really great,” said Mr. Addison.

“You know doing the right thing by somebody who does something bad to you, it’s a very universal message that even if somebody kicks you, you don’t have to kick them back. There’s not an eye for an eye anymore or a tooth for a tooth, it’s how it is. Compassion is what we should be looking forward too.

Ms. Addison also thought the message of truth and compassion was very powerful.

“I feel blissed out, I really thought it was so special. And the message that they carry across and tell the audience is something that we can all learn from.”

She felt there was a message “about compassion and caring for other people and speaking the truth. I thought that it was a very powerful message and we should all do a little bit more of that,” she said.

Shen Yun brings myths and legends of ancient China to life onstage giving the audience an insight into another spiritual dimension.

“I think it was full of surprises, there was a surprise around every corner and I really loved the visualization, and also that dedication that the dancers and the singers and the musicians have. To have that element of light music, it’s really special,” Mrs. Addison said.

Mr. Addison agreed saying, “I loved all the music, the instruments were so unique and so powerful—[they] strike a chord with your heart, and it’s a great thing.”

He was enthralled with the whole performance. He thought the transitions from the screen to the stage were unique.

“I thought that was so wonderfully done and so high tech, I’ve never seen it done before, so it was unique to me, a really wonderful concept, flying in the sky, landing on the ground walking around, how cool is that!” he said.

According to Shen Yun’s website “With state-of-the-art graphics technology, Shen Yun’s digital-backdrop team creates vividly animated settings, extending the stage and transporting the audience to a world where heaven and earth are one.”

Rosemary Jarvis was impressed with the impeccable timing, movement and synchronicity of the performance.

“It was marvellous it was, the colour and the movement and just the synchronicity all that movement—you would have thought there was a 100 people on stage, it was really, really fantastic.”

She was in awe of the visuals on stage saying, “I just loved the colour combinations as well, you know the vibrant colours and colours that we don’t often put together but they were just really magnificent and just the way that the movements in the fabrics were really rich, yes [they] just took you away to another world.”

The sound of the soul-stirring erhu was a new experience for her; the erhu being one of the ancient Chinese instruments.

“I couldn’t believe that musical instrument that only has two strings and the amount of music you can get out of two strings; yes it was a real cultural experience.”

‘Prepare to be Amazed’

“Amazingly beautiful! Prepare to be amazed,” said another audience member, Joan Myerscough, who came with her daughters.

“Uplifted! Beautiful! I’ve seen many shows, but I don’t think anything compares with the wonderful feeling it gave you to see this one.”

The interactive backdrop in a story-dance, where a beautiful magic maiden turned into a fish then a water dragon spirit, stood out for her. [Magic Brush]  Ms. Myerscough said, “I was amazed at how the backdrops were managed and the fish, you could hear it plopping in the sea. I thought it was wonderful, absolutely wonderful.”