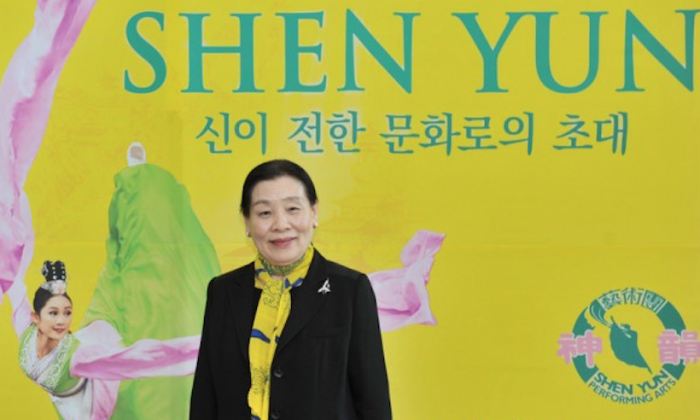 JEONJU, South Korea—Ms. Ryu Ryun-Jeong, traditional Korean dance teacher, is very particular about the performances she goes to. “I only see Shen Yun’s performances, and nothing else,” said Ms. Ryu at the Sori Arts Center on April 30, the day of Shen Yun’s debut in South Korea.

This was Ms. Ryu’s second time seeing Shen Yun perform, and she wasn’t disappointed. “I was struck by everything, from the dances to the music … words seem feeble in the face of such emotion,” Ms. Ryu said, still captivated by the great sensation she experienced during the show.

“Every now and then I had tears running down my face. I just couldn’t help it,” she said.

The way the story was told in “Fairies of the Sea” left Ms. Ryu much impressed. “The fairies dancing on the water—not in my life could I have imagined something that beautiful,” said Ms. Ryu, who was proud of what Shen Yun has achieved. “The artists convinced me that was the way fairies are.”

Ms. Ryu has devoted 15 years of her life teaching traditional Korean dance. Yet she still believed that there were things she could learn from Shen Yun. “The more I watch Shen Yun, the more I have learned from it. A channel for me to learn, that is what Shen Yun is,” she said.

According to Ms. Ryu, this year she’s learned from Shen Yun something invisible. “The artists dancing in a group were able to present a sense of self control. Most artists, when standing on the stage, want to stand out. Not Shen Yun’s artists,” she explained. In her mind, a dancer should not try to stand out and only then will his postures seem natural and appealing.

The classical Chinese dances performed by Shen Yun often include many people on stage at a time. The artists tumble, flip or move elegantly in a highly unified fashion.

Ms. Ryu took notes as she watched the performance. “This year I wrote: the artists’ hearts and mind, on my notebook. It is the mind that matters and the artists’ minds are at a higher level,” she said.

“I am inspired. Never did I know what real dances were until I saw Shen Yun,” she said.

After the graceful fairies, the powerful drumming and rhythmic Mongolian dances in “Drums in the Grassland” brought refreshing energy into Ms. Ryu’s soul. She didn’t miss the technical details either. “With those kind of skills, I can only imagine how much work they have put into the performance,” she said.

As traditional Korean dances are generally slow-moving, the high-spirited dance in “Drums of the Grassland” actually got Ms. Ryu thinking about bringing in new blood into Korean dances.

As Ms. Ryu learned that Shen Yun was unable to perform in China because some of its stories are inspired by Falun Gong, a spiritual practice currently persecuted in China, she was a bit saddened.

She hoped those who lived in China could soon get a chance to watch a performance that inspired her and allowed her to see 5,000 years of Chinese culture in the story-based dances.