Kern County Deputy Director: Shen Yun, ‘Something that needs to be seen’ 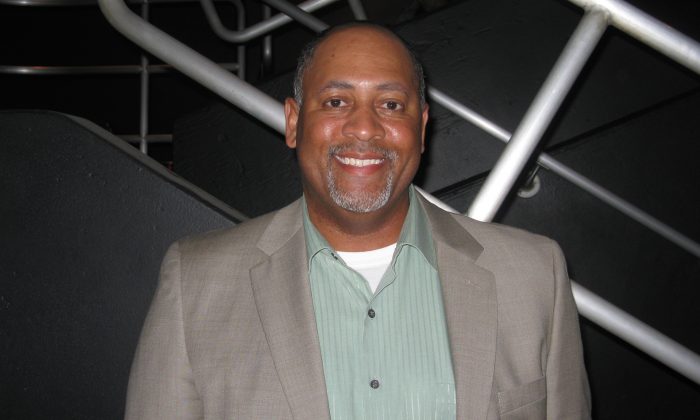 BAKERSFIED, Calif.—One could say that Aaron Ellis has a good heart and an interest in Chinese culture. For the past several years, his family has hosted Chinese students in a cultural exchange program.

After watching Shen Yun Performing Arts Feb. 27 at Rabobank Theater, he thought of the Chinese exchange students who recently left his home and returned to China: “I wish they would’ve been here for this. This would have been wonderful for them to see,” he said. “This is something that needs to be seen.”

Mr. Ellis is County Deputy Director for the American Job Centers of California (AJCC) in Bakersfield. He is also actively involved with Education First (EF), an international education company focusing on language, academics and cultural experience.

He was moved after watching the first half of Shen Yun. “Truth, compassion, tolerance. That was fabulous,” he said.

Mr. Ellis was referring to a piece entitled The Power of Compassion, which depicts a true story of the persecution of Falun Dafa practitioners in today’s China. It tells of a police officer who, in the midst of terrorizing Chinese people, changes his violent ways after being cared for by the very people he was victimizing.

Shen Yun is a New York-based, classical Chinese dance and music company, and each performance includes over 20 vignettes that transport the audience members on a journey through 5,000 years of China’s traditional civilization, from the past to the present, where myths and legends come to life, and virtues such as bravery, compassion, kindness, loyalty and perseverance are personified.

China was once known as Shen Zhou, the “Divine Land,” with the belief that its rich culture was a gift from the heavens. Shen Yun was formed by a group of overseas, leading artists, and its mission is to revive China’s divinely inspired culture that has been nearly lost under the atheist, communist regime.

Mr. Ellis was moved by the spirit of freedom in the performance. “They don’t get to really express themselves [in China] like we do here in the States, and see that in the Chinese performance. It touched me,” he said.

“Shen Yun cannot be seen in China today, where traditional culture has been nearly lost. Yet Shen Yun—a non-profit organization—has become an international phenomenon, bringing the wonders of ancient Chinese culture to millions across the globe,” states Shen Yun’s website.

“Hopefully, the Chinese government will see this as an enlightenment to the community of China,” said Mr. Ellis. “By being a host family hosting Chinese students for the past seven, eight years, I would like for them to see this [performance],” he insisted, “especially, the Chinese children should see this.”

Before each piece, a male and female emcees offer an introduction in both Chinese and English to familiarize the audience with the history behind the stories.

Mr. Ellis had high praise for the two emcees. “I love the two emcees. She’s hilarious. First, she didn’t talk in English, so we thought she didn’t know any English. Then all of a sudden, she started speaking English also. They worked well together.”

Mr. Ellis said he would definitely recommend Shen Yun to his family and friends: “Come bring the kids, so they can see the culture of China, and the dancing. It’s just fabulous.”

A ‘Spectacular array of great variety of artistry, beauty and joy’

Karen Goh, former supervisor of the Fifth District of Kern County, attended the Feb. 27 performance with her niece, a local high school student.

“This is a magnificent show,” she raved about the performance. “This is a spectacular array of great variety of artistry, beauty and joy.”

Ms. Goh, who is also the president and CEO of Garden Pathways, a non-profit organization, was inspired by the divine aspect of traditional Chinese culture portrayed in the performance.

“There are moments when we can reflect on the beauty of God, the beauty of creation, and the beauty of nature,” she said, “Seeing the level of talent and high quality of demonstration in artistry and beauty is a great inspiration.”

“Throughout history, almost every culture looked toward the divine for inspiration. Today, Shen Yun’s artists-dancers, musicians, choreographers, and composers, and the entire team-follow this noble tradition. For them, this spiritual connection is the motivation for striving to excel, is the heart behind each movement of the dancer and each note of the musician. It is why audiences can feel there is something different about Shen Yun,” according to the website.

Ms. Goh said, “As a Chinese, I feel tremendously inspired, and very proud of my heritage.”

“I highly recommended the performance,” she added. “You will enjoy the wonderful inspiration, the wonderful talent, and the magnificent display of the physique and talent. I highly encourage all people to come and see this beautiful, spectacular show.”

“It was amazing,” said Mr. Ramsey. “I enjoyed the show very much.”

All aspects of Shen Yun’s performance delighted him. Mr. Ramsey was particularly awed by the soprano soloists who use the bel canto technique while singing in Chinese. “It was amazing. I couldn’t believe the range they had,” he said.

He was also struck by the solo instrumental music: “It was amazing –  the sound you can get out of the two strings.”

Mr. Ramsey was referring to the erhu, which is a two-stringed instrument with four thousand years of history and known to convey a wide range of emotions.