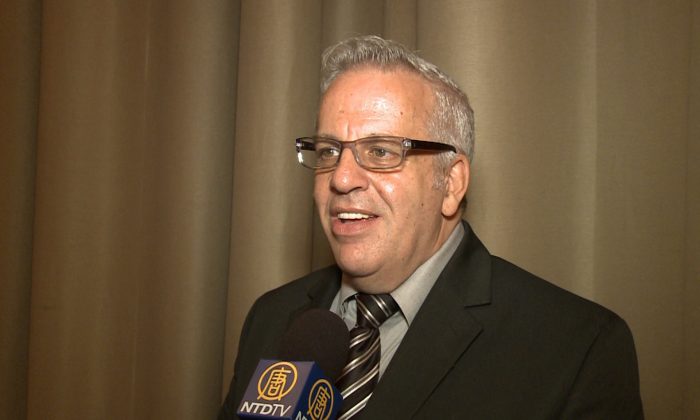 WASHINGTON—The Shen Yun Symphony Orchestra returned to the nation’s capital for a performance on Sunday evening, Oct. 11, to play compositions and songs that possess the distinct sound of Chinese melodies and instruments. While the sound is new and unique, it is at the same time familiar too. The performance for one night only captivated the audience at the Kennedy Center Concert Hall, who gave a standing ovation. The orchestra in turn played two encores.

Tom Chiodo, who works in public television, told NTD, that the blend of East and West was “beautiful.” “I had not realized I was seeing Western instruments recreating Chinese music.”

His companion, Linda MacMaster, who is a marketing consultant, was also pleasantly surprised.

“I didn’t have an expectation coming into this but the music, the blend between Western and Eastern is staggering, I mean, it creates a sound that you know is more Eastern, in philosophy and in harmony, but it is just beautifully set to the symphonic stage. So I’m just so excited,” she said.

Composer Gao Yuan said, “The program’s original selections are taken from our dance performances’ all-time favorite pieces. We then rearrange them for our full symphony orchestra. The melodies you hear in these compositions were inspired by ancient folk and ethnic tunes that have been passed down through the ages.”

The erhu, a kind of Chinese violin that sounds much like a human voice, is integrated with the Western instruments, along with the pipa, the plucked Chinese lute, which is another Chinese traditional instrument. The erhus especially could be heard distinctly in many sections of the pieces, sometimes playing solitary and opening the piece, as in “Snow-Capped Celebration” and “The Power of Compassion.” It is not surprising why the audience, like Ms. MacMaster, could get excited with this Eastern sound interpreted by the Western orchestra.

Mr. Chiodo, said, “Well it’s fascinating to see this type of music recreated with these types of instruments.”

The liner notes say, “The Shen Yun Symphony Orchestra is opening up new horizons in the world of classical music.”

Both agreed that the operatic songs were beautiful. Speaking for her companion as well as herself, Ms. MacMaster said, “The operatic part of this, with this tenor and the soprano–the soprano, sublime, and your tenor, sublime.”

Speaking of the blending of East and West, she said, “It creates a music that’s very easy to listen to. It’s complex, but at the same time there’s a simplicity to it and a beauty to it that I think goes across all audiences.”

Composer Gao Yuan said he wants the audience to be “inspired,” not only by the performance, but by China’s ancient culture.