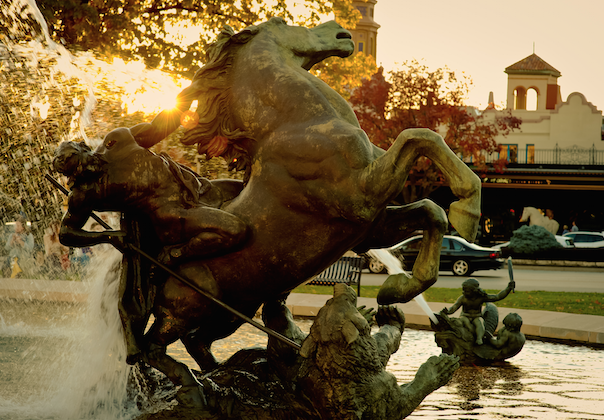 Shen Yun’s mission is to revive traditional and divinely inspired Chinese culture by an all-new show each year that tours to some 20 countries and over 100 cities worldwide. Kansas City is the 11th out of 18 Midwest cities that the company travels to this year.

Leading up to Shen Yun’s arrival to the twin city, proclamations and greeting letters celebrating the contributions of Shen Yun to their communities were given by officials representing the metro area in Missouri and Kansas.

Kansas City is known as the City of Fountains and renowned for BBQ, jazz, arts, high technology businesses, and more.

“The artists of Shen Yun provide a cultural experience that intertwines China’s history through impressive choreography, and operatic setting. Its interpretation of 5,000 years of Chinese culture serves as the subject for this highly artistic means of preserving Chinese tradition,” said Missouri Representative Emanuel Cleaver, II in his greeting letter.

He went on to say, “Due to the show’s outstanding reputation, last year’s performances at Kaufman Center were sold out. Patrons have patiently been looking forward to this year’s increased number of performances on March 28, 29, and 30, 2014.”

In addition, Senator Clarie McCaskill welcomed Shen Yun, saying, “It is truly an honor to have this internationally recognized performance return to the beautiful Kauffman Center for the Performing Arts.

“This unique cultural tradition showcases a great deal of talent and vision. Shen Yun is a performance that both entertains and educates its audience with performers and members who serve as cultural ambassadors,” stated Missouri Senator Roy Blunt.

In the City of Riverside, Mayor Kathleen Rose wrote that she joins her “fellow citizens in welcoming Shen Yun to Kansas City for their 2014 performance, and extending [their] best wishes for continued success in the future.”

Jeff Meyers, Mayor of the City of Shawnee, Kan. stated in a proclamation that “the community recognizes organizations which are dedicated to the betterment of our society” and said that such organizations “are an asset beyond remuneration and cannot be sufficiently extolled but whose services can be celebrated,” with Shen Yun being one of these organizations.

Mayor Peggy J. Dunn’s proclamation congratulated Shen Yun for its excellence “in a performances and for bringing cultural enrichment to the Leawood, Kan. community.”

“We wish to thank the Falun Dafa Association for making it possible for us to experience 5,000 years of traditional Chinese heritage, culture, and arts through dance and music,” said Mayor Michael Copeland of Olathe, Kan. “We are grateful for these opportunities to promote greater cultural understanding and appreciation between the East and West.”

The Falun Dafa Association of Kansas City is a local nonprofit that has assisted in bringing Shen Yun to the metro area six times to date.