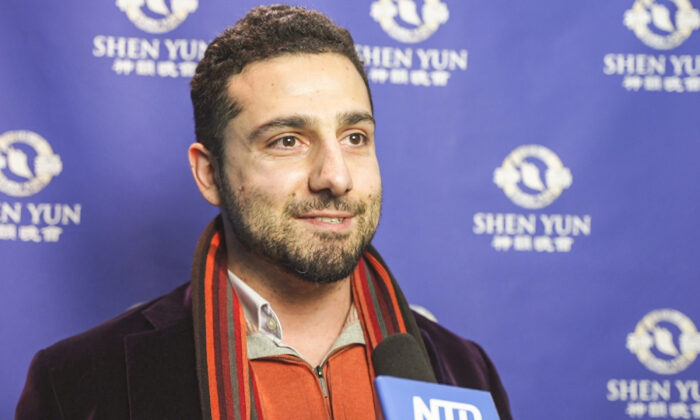 Kourosh Wallace at the Shen Yun Performing Arts performance at the Eventim Apollo, in London, on Feb. 26, 2022. (NTD)

LONDON—Shen Yun Performing Arts’ inaugural 2022 performance in London played to a packed theater, the audience delighting in an evening of classical Chinese dance and music.

“It was just mind-blowing. It wasn’t just the dance, it was the dress, the music, the movement, and even the singers as well. Everything was put together, I think, perfectly,” said Mr. Wallace.

It resembled a lot within the Chinese culture, like the yin and the yang.
— Kourosh Wallace

“What really struck me about it was all of the beautiful colors and the way even they managed the garments as well. All of them in unison, it was just absolute perfection. It resembled a lot within the Chinese culture, like the yin and the yang, like one minute they were moving very slowly, and very synchronized, and all of a sudden, the bodies would just spring up, and it was just incredible. It kept you very engaged and captivated throughout the whole performance.”

Mr. Wallace is a painter and portraitist.

Given his artistic background, he said he found Shen Yun‘s use of animated backdrops very inspiring.

Shen Yun’s creative patented backdrop technology allows interaction between the dances and the projected backgrounds, adding to the grandeur of the performance.

“It really opened up my mind and triggered off many things visually as well,” he said. “I just found it very visually appealing and inspiring.”

New York-based Shen Yun is a classical Chinese dance and music company that aims to revive China’s culture that has been all but destroyed after decades of communist rule in China.

“China’s ancient name, ‘The Land of the Divine’ tells of a world where deities and mortals together walked the Earth. Music, medicine, calligraphy, clothing, language, and much more were said to have been brought down from above,” says Shen Yun’s website.

“There was a lot of truth behind what they were … teaching through love, through kindness, compassion, discipline, control,” he said.

There were also many lessons to be learned through the story-based dances in the performance, Mr. Wallace said.

I think all of these things, they’re timeless lessons. It doesn’t matter what time you are in history.
— Kourosh Wallace

“I think all of these things, they’re timeless lessons. It doesn’t matter what time you are in history. It’s there for you to learn really,” he said.

“It’s wonderful to learn this part of Chinese culture because we don’t get to see this a lot. It was a really beautiful side of the culture to learn from and be entertained at the same time.”

Karen Wilkins, a performing artist and engineering buyer, said she has “never seen anything as beautiful” as Shen Yun.

“They are incredible. Their dancing is amazing. I’ve never ever seen a show like it. I’ve been to lots and lots of shows in my time, but this is—their techniques, they were on time. Their songs were amazing. I’m definitely going to come back and see them again,” she said.

In a word, Ms. Wilkins says, Shen Yun is “heavenly.”

“They are absolutely incredible and I’ve never, ever in my life—seen such a fantastic performance.”

“Just the sheer energy of the show was amazing. And the stories were beautiful, captivating, and uplifting,” he said.

Mr. Singh used to do design work for opera sets, but now he is focused on interior design work.

Besides the artistry in the performance, Mr. Singh had high praise for the spiritual aspect of Shen Yun.

“You could feel the spirit moving through the entire stage,” Mr. Singh said.

Pointing to the fact that Shen Yun cannot perform in today’s China due to the Chinese communist regime, Mr. Singh said the regime is afraid of what Shen Yun presents.

“There is an agenda afoot today that’s attempting to stamp out the human experience—the contact with the divine to turn us into automatons. They’re trying to make human beings fit into society, as opposed to society fit into the human experience. And this [Shen Yun] is an absolute rebuttal to that: That no, we’re all human beings, and we’re all here to experience love and mostly, that sense of freedom, that sense of freedom that all of them displayed in the dancing, the way they were flying through the air, and the singer [as well].”

Reporting by Mary Mann and NTD.