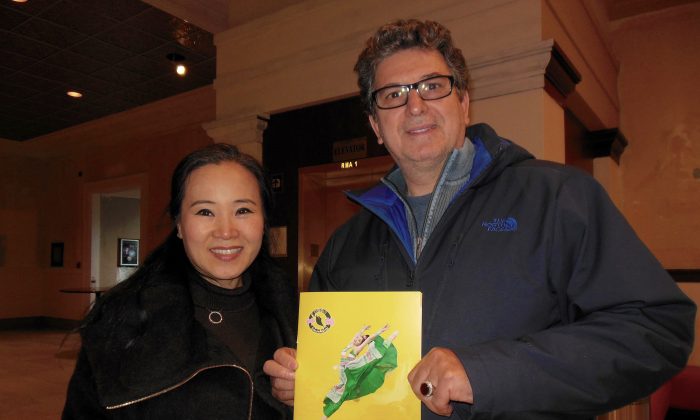 Jewelry business owners Yunee and Tony Boujida came to the capital of North Carolina to watch the Shen Yun Performing Arts on the afternoon of Jan. 24, 2016. (Sherry Dong/Epoch Times)

RALEIGH, N.C.—When jewelry business owner Yunee Boujida saw Shen Yun Performing Arts on Sunday afternoon, Jan. 24, it touched her to the core of her being.

“It made me cry … The tenor makes me cry involuntarily,” said Ms. Boujida. “The tears are coming out without my will because when you hear something true, it just automatically—your body, your soul—it responds.”

She further explained what she meant by this concept of truth.

This spiritual response that Mrs. Boujida and many other theatergoers experience after watching Shen Yun could be explained by the fact that China’s ancient civilization was deeply spiritual.

But the 5,000-year-old traditional Chinese culture under the communist rule was driven to the brink of extinction. Shen Yun’s artists have made it their mission to revive it, says the program book.

Once known as the Celestial Empire, China’s glorious culture is said to have been brought down from the heavens.

This feature did strike a chord with Mrs. Boujida, who, being originally from South Korea, said their people are very respectful to “everything—nature, people—everything God created.”

She felt the spiritual principles she saw in the performance applied no matter one’s religious or cultural background. “God wanted us to do nothing but good because in the end, there’s another life, I believe.”

“You feel more like tranquility, and you feel peace that you are more certain [with what]  you have to do the rest of your life,” Mrs. Boujida said.

She said she will “make it peaceful with everyone. Live a peaceful life. Do good things. Make it harmony.”

She brought up the concept of yin and yang, saying there is a dark side but also a bright side to life.

“There’s dark side, bright side, so live positive. Live positive no matter what. Just be positive,” she said.

‘This life is just a bus stop’

The last scene of the performance called “Hope for the Future” had a strong effect on Mrs. Boujida.

According to the program book, “this story revisits an ancient belief—the idea that we all came from the heavens and that, by becoming good, we can one day find our way back home.”

“Oh that’s basically karma,” Mrs. Boujida said. “If you’re good, you will end up in a good place, but if you’re bad, there is a price to pay for it.”

“God gives you a choice: do good or do bad, so it’s your choice … you are free to choose,” she said.

Mr. Tony Boujida, Yunee’s husband, joined in praising the performance that he said showed him the art and beauty of the real China, different from his impression from the limited exposure gleaned from the news.

Like Mrs. Boujida, he connected with the spirituality through his personal beliefs.

Mr. Boujida said that the performance conveyed that living in this world is only a transition: “This life is just a bus stop … ultimately there is another world waiting for the next life.”