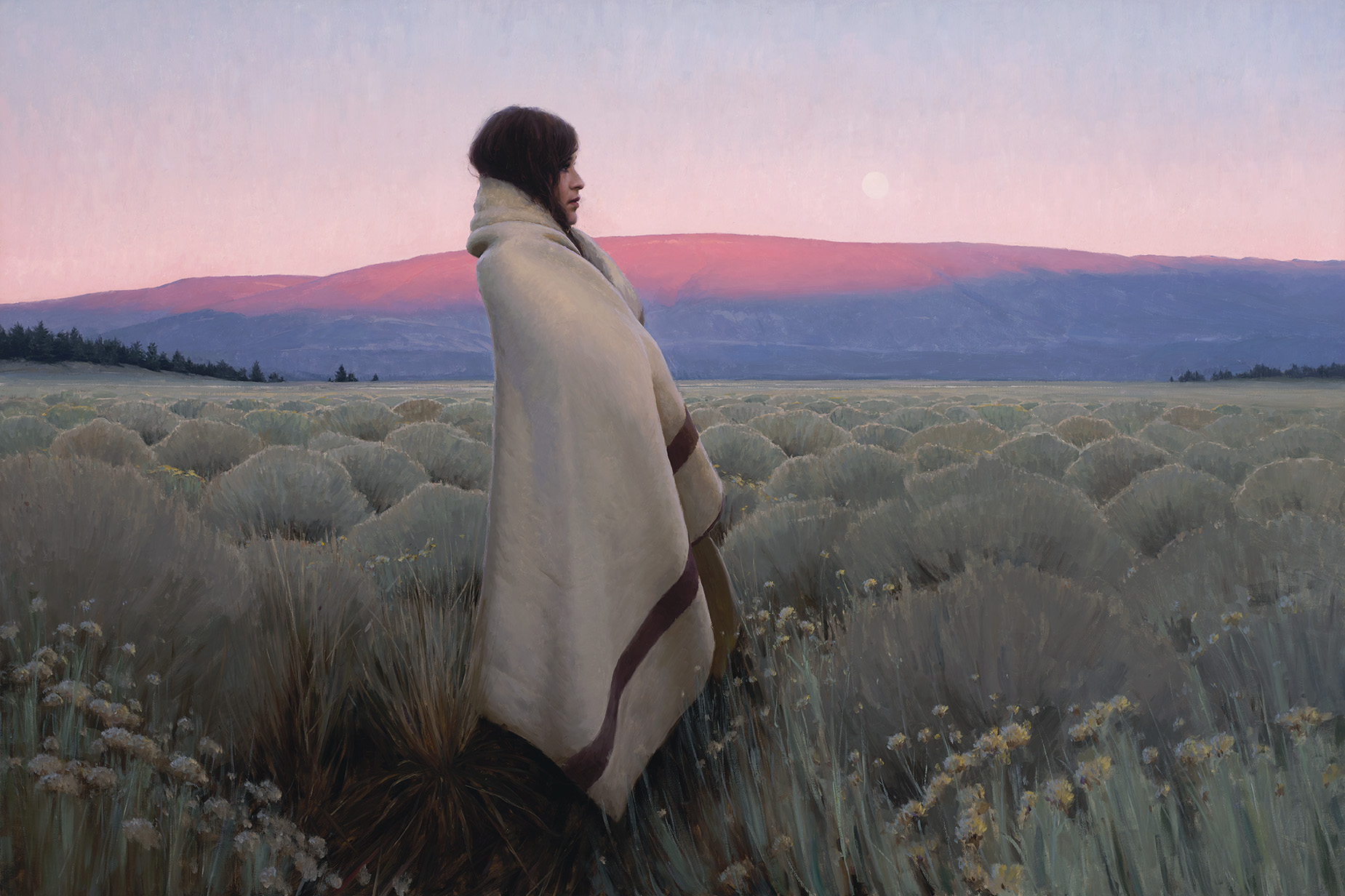 Jeremy Lipking depicts the natural world with an acute sensitivity. His love of the outdoors is voiced through his works of art. With expert use of color, value, and composition, the earth in its untouched forms seems to flawlessly emerge through Lipking’s brushstrokes. You may experience a gentle reprieve as if walking through the foothills of the magnificent Sierras when you look at one of his paintings.

The painting “Moonrise Over the Vermilion” depicts a figure wrapped in a fawn-colored blanket, standing in the middle of a dry field with a glowing purple dusk mountain far in the distance, and the subtlest hint of the moon just peeking over the mountain range. The blanket, nearly matching the value of the wild brush that the girl stands upon, succinctly plays with the viewer’s eye, bringing attention to the darker profile of the girl, and the dark tree line in the background, and then drawing the eye back to dance around the subtle tone variations of the brush and mountains. The piece is brought together with the final harmonizing element of a glowing sky, an effect renderable only by a highly skilled painter who understands the subtle play of tone and value. It is no wonder Lipking is currently one of the most sought-after contemporary realist artists, winning nearly every painting contest he has entered.

Jeremy Lipking’s exposure to art began at a young age. His father was an illustrator and landscape painter. Lipking would spend afternoons walking through art museums instead of watching television. After high school, Lipking moved from an urban setting to a town in the mountains where he could climb, ski, and snowboard. On days when he wasn’t doing one of these activities, he would often take a set of watercolors to paint out in the mountains.

“I always liked being outdoors,” Lipking said. At some point, he decided to pick up oil paints. “Those early pieces really were not very good,” Lipking recalled with a light chuckle. He knew that he wanted to master this craft, and realized he couldn’t do it entirely on his own.

In his twenties, Lipking enrolled at the California Art Institute. He was one of the few young artists at the school who took a special interest in classical techniques and traditions. He and his classmates would pass around drawings done by old Russian masters to copy and study. “I wished I had had a place to study more formally,” Lipking said. But it’s clear he has no regrets. He gratefully credits his California Art Institute teacher Glen Orbik with giving him some of his most significant lessons in drawing.

Lipking continued to study drawing on his own, practicing techniques he picked up along the way from school, workshops, and the works of other artists. He knew that developing his drawing skills was one of the best ways to improve his painting. “Drawing is so mechanical,” Lipking said about his experience learning this skill, “Only after years of dedication and practice did it begin to feel intuitive.”

When asked about his style, Lipking simply says, “I try not to have one.” Perhaps one of the best approaches to style that one could take, this allows the genuine experience of creation to come through rather than creating in a contrived way. This refreshing authenticity rings true in Lipking’s paintings.

Some of Lipking’s inspiration for how to blend colors and understand painting techniques comes from John Singer Sargent, Anders Zorn, Nicolai Fechin, and the master landscape painter Joaquin Sorolla. He read over and over again the book Alla Prima, by Richard Schmid, uncovering different approaches to painting that he would then apply to his own work. Lipking’s years of disciplined study and dedication to the craft paid off. He improved rapidly, reaching toward his calling to paint with mastery.

Not only a landscape painter, Lipking is also a skilled figure and portrait painter. His approach to painting the feeling of a person particularly stands out. “When I’m painting a figure or portrait, the expression on the face becomes the most important part,” Lipking said. “I tend to spend a lot of time getting the subtle expression just right. One little brushstroke can completely change the mood.” Lipking said he can spend up to a couple weeks making minute adjustments to the eyes, or the corners of the lips until the feeling of the portrait resonates for him. In his most recent show, all but two of the pieces include carefully crafted portraits. Each one carries an almost surreal sense of aliveness and honesty in their expressions.

The 19 paintings in Silence & Sagebrush unite Lipking’s interests in landscape and portrait painting. Each piece marries both elements, one seeming to have a natural belonging to the other. In a couple of the pieces, his wife, Danielle, is painted holding one of their youngest children. In another, his daughter tenderly holds their darkly plumed chicken. And in yet another, his older daughter sits serenely in a boat on a lake reflecting the sunrise light. His supportive family members are ready and usually willing subjects, with the exceptions of the youngest children, who sometimes resist the idea of remaining still for a painting. Lipking’s intrinsic value of beauty in the natural world translates fluidly into his paintings, skillfully bringing life onto his canvas.

Completing around 15 finished gallery pieces per year, Lipking isn’t short on inspiration. Just as he has completed his one-man show, he is preparing two more paintings to be shown in the Prix de West invitational art exhibition coming up at the end of June, at The National Cowboy & Western Heritage Museum in Oklahoma City.

Silence & Sagebrush ran through March 21, 2021, at The Legacy Gallery.

Sarah Hodges is a freelance writer currently based in Honolulu, Hawaii. Before becoming a writer, she studied fine arts at the Pennsylvania Academy of Fine Arts, The Grand Central Atelier in New York, and The Florence Academy of Art in Florence, Italy. Her inspiration for classical art first came from her grandfather, who is a contemporary realist painter in Hawaii.

Arts & Culture
Cultivating Mastery at The Barnes Atelier of Art

Arts & Letters
Remembering What Is Important: It Is All But Hay