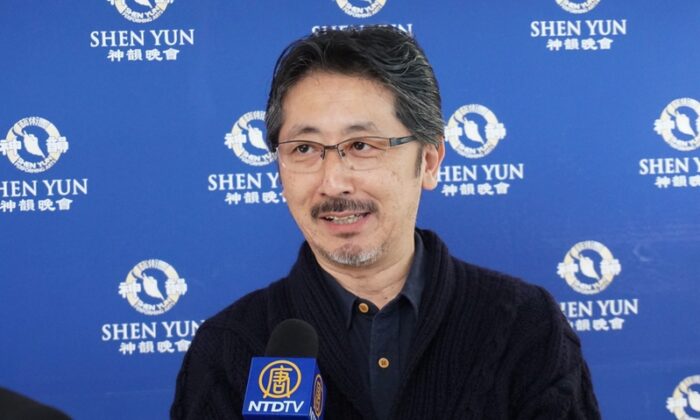 Kanao Ayahito was delighted to enjoy the artistic feast portraying the authentic traditional Chinese culture in the form of classical dance. He was especially amazed by New York-based Shen Yun’s extraordinary dancing skills.

“The dance performance is beyond human limits,” Kanao said. “It’s really very touching, and it cannot be described by words.”

“How come such a high-level quality could be achieved?” he exclaimed. “They must have undergone tremendous hardships. I really want to see how they are trained.”

As a film producer, Kanao is familiar with the overall flow of audiovisual productions, and he was captivated by the perfect synchronization of the dance performance on the stage and the live music performed by Shen Yun’s unique orchestra.

“This is the very first time I have seen such a performance. And I feel it’s incredible,” he noted. “It’s truly remarkable. I feel like seeing it again.”

He was also impressed with Shen Yun’s animated backdrops that can make the audience have the feeling of transcending time and space.

“After seeing the performance, I believe program producers around the world should be tremendously impacted and may try to follow suit,” he said. “So, it will have a far-reaching effect.”

Shen Yun’s official website explains, “Shen Yun’s backdrops are like magical windows that infinitely extend and transform the stage. The digital designs complement and synchronize all aspects of the performance, and are as grand as they are intricate. Inspired by 5,000 years of history, our designers create vivid animated settings that truly reflect China’s multifaceted geography, society, regions, and dynasties. Some scenes even transcend this world, bringing you a touch of the heavens.”

As a Japanese who has a liking for authentic Chinese traditions, Kanao thought it delightful to see the Shen Yun performance of authentic traditional Chinese culture.

According to the program, Shen Yun was established in 2006 by artists who had a vision and shared a passion to revive “the lost world of traditional Chinese culture and share it with everyone.”

“[Shen Yun] has reached unparalleled heights in terms of interpreting the essence of Chinese history,” he said.

After seeing the performance, he highly spoke of Shen Yun and its artists.

“It’s indeed a magnificent performance,” he said. “I can tell every performer’s skills are extraordinarily high and believe that they would have undergone rigorous training.”

Osaki Kouitirou said that he had practiced apparatus exercise and was once an athlete for the Olympic Games, so he understands the difficulties of performing such classical Chinese dance.

“On the surface, it sounds simple, but in fact, it’s very difficult,” he explained. “As a professional, I know [Shen Yun] is really very wonderful.”

“To dance in unison is by no means something easy, not to mention jumping and flipping to the same height at the same time. They [Shen Yun dancers] even turned their bodies at the same angles,” he said with praise. “I believe they must have been trained rigorously.”

“Every performer is so beautiful. They are really great,” he added.