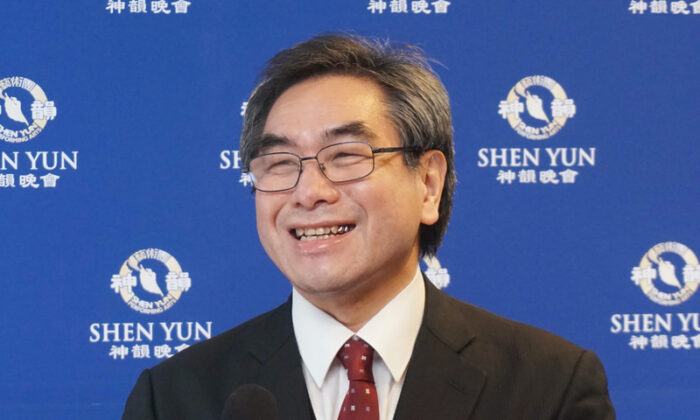 TOKYO, Japan—Yamagishi Yasunari, owner of an intellectual property design and development consulting firm, missed Shen Yun Performing Arts New York Company’s three performances in Tokyo on Jan. 10-11. But when it returned to Tokyo and presented four additional shows at Tokyo Bunkyo Civic Hall on Jan. 27–29, he attended one of the performances on the evening of Jan. 27.

“This is a performance that ushers in a new trend [in the arts],” Yamagishi said after he saw the performance.

“It’s so beautiful that I was blown away by it,” he said. “In particular, when the fairy-like actors were dancing along the rotation of the giant wheel (Law Wheel), the scene was so marvelous and touching.”

“It was so fascinating as if I was in fairyland,” Yamagishi further said. “When the celestial maidens suddenly descended from the backdrops and appeared on the stage right in front of me, I was entirely enthralled.”

Shen Yun’s unique digital projection, extending the stage to infinite realms, creates seamless interaction between projection and performers on stage—an invention so original it has its own patent.

“I seemed to be brought into another dimension,” he continued. “It was like a realm of Shangri-la far beyond this modern world, and was surrounded by a different ambiance out of the contemporary society.”

Yamagishi was amazed by the story dances with mini-dramas that vividly depict cherished stories of the past.

“In dance dramas, there are some humorous plots, in which the synchronization between the dancers and the backdrops is seamless,” he noted.

According to Shen Yun’s website, “Every year Shen Yun premieres a brand-new performance, complete with new works of choreography and orchestral music, as well as new costumes, digital backdrops, and storylines.”

Yamagishi was thankful to Shen Yun for such a wonderful evening experience.

“The entire show left a long-lasting impression, and I feel like seeing it over and over again.”

With reporting by Xue Juan, Miranda Tsai, and Billy Shyu.