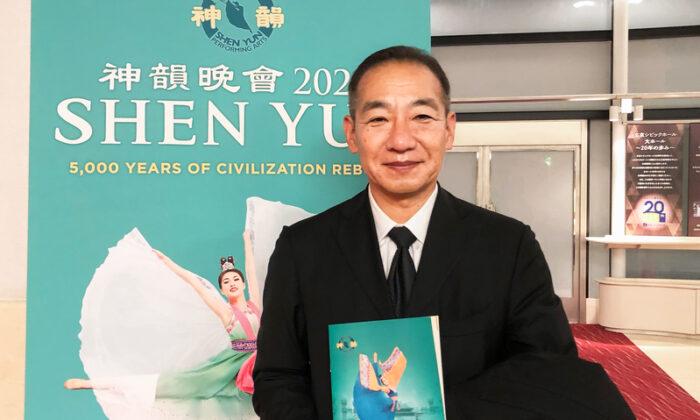 TOKYO—Hagiwara Yasunobu, board director of Biketsu Life Company Limited, was delighted to see the performance presented by Shen Yun Performing Arts New York Company at Bunkyo Civic Hall in Tokyo on the evening of Jan. 11, 2020, at a time when he faced with some uncertainties due to a career change.

After seeing the performance, he was thankful to Shen Yun for sorting his problems out.

“I started my new career this year, and I was worried about my own future. At this juncture, I watched Shen Yun [performance], and it gave me a lot of positive energy,” he explained.

“In this regard, I am really thankful [to Shen Yun],” he expressed.

Hagiwara Yasunobu was captivated by Shen Yun’s splendid performance from the beginning to the end.

“I was truly moved. At the moment when the curtain was hoisted, I was truly excited as if my entire body had got an electric shock,” he said. “[Shen Yun] is really spectacular!”

According to Shen Yun’s website, “With state-of-the-art graphics technology, Shen Yun’s digital-backdrop team creates vividly animated settings, extending the stage and transporting the audience to a world where heaven and earth are one.”

Hagiwara Yasunobu was also fascinated by the digital backdrops that can make the audience have the feeling of transcending time and space. “It was beyond my imagination,” he continued. “The backdrops on the stage are so beautiful and amazing.”

“I feel a strong energy moving into my body,” he added. “It’s a kind of feeling that I cannot use human words to clearly describe it.”

“I perceived the [celestial] world that cannot be seen by ordinary people,” he continued. “It was so magnificent that I was very excited and happy.”

The extraordinary performances of Shen Yun vocal soloists also impressed him very much.

“What made me feel shocked most is the performances of the soprano, the tenor,” he explained. “In particular, the soprano’s voice is so high that it resonated throughout the entire hall.”

“The lyrics are very inspiring,” he noted. “It conveyed the messages that should be known by the public, but have been censored by the Chinese government.”

“It takes courage to clearly spread the notion of how to discern good from evil, and virtue from vice.”

He was also touched by a dance piece that depicted the persecution of Falun Gong practitioners in China, and their steadfastness in their belief regardless of the persecution.

“I didn’t know about the persecution [of Falun Gong]. I think it is something lamentable,” he continued. “It takes firm determination and tremendous courage for Shen Yun to spread this message in the form of performing arts.”

“According to the emcee, Shen Yun continues to expand. I hope Shen Yun can prosper continuously around the world,” he said. “I’ll definitely see the new program again next year.”

With reporting by Niu Bin and Billy Shyu.