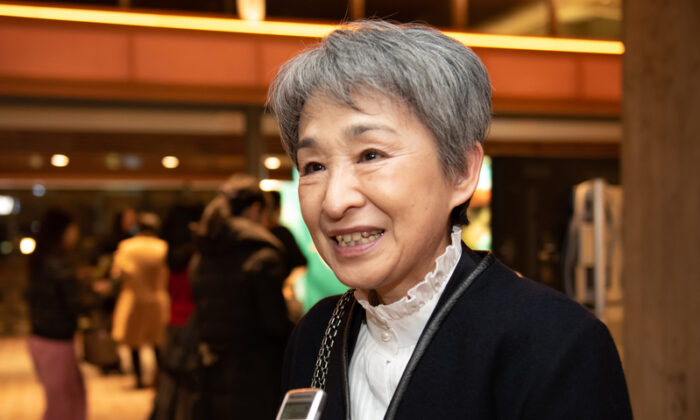 KYOTO, Japan—For Nagai Hisayo, it was an amazing evening at the local ROHM Theatre on Jan. 3, 2020 after seeing a performance by Shen Yun Performing Arts. She left the venue with a feeling of deep gratitude to what she saw.

I was so touched when seeing how a two-string instrument could express so much. That was outstanding.
— Nagai Hisayo

“I was so touched when seeing how a two-string instrument could express so much. That was outstanding,” said Hisayo, who sits the board of directors of a Japanese healthcare equipment company called Soken Medical.

The instrument that Hisayo mentioned is called erhu, also known as the Chinese violin, which has a history of over 4,000 years. What’s most unique about the ancient instrument is that it has a wide musical range, allowing it to be very expressive, mimicking sounds such as the chirping of birds or the human voice.

Erhu is one of many different Chinese instruments that make a one-of-a-kind orchestra with a classical western symphony as its foundation. Together, the unique musical blend of the East and West provides musical accompaniment to Shen Yun’s dance performances.

Hisayo pointed out that it was her first time seeing such an orchestra, and the live music was simply superb.

Established in New York in 2006, Shen Yun Performing Arts has grown rapidly over the years—now with seven different companies that engage in month-long tours around the world. This year, the Asia-Pacific tour will take Shen Yun to Japan, South Korea, Australia, New Zealand, and Taiwan.

Hisayo said she was also very touched by the different dance dramas, in particular, a story involving a group of monks and how they helped other people. To her, the story was both comical and extraordinary.

A big part of Shen Yun Performing Arts is about bringing back China’s rich history, which spans more than 5,000 years. To bring back the ancient past, as well as presenting what’s happening in China nowadays, Shen Yun draws up stories and legends to create mini-drama dance pieces.

Aside from dramas, there were also dance pieces, including Chinese ethnic and folk dance. Hisayo pointed out that she noticed there were district differences between male and female dancers in these dances.

Shen Yun also features vocal music with singers singing Chinese text with bel canto technique. Hisayo pointed out how the voice of a male singer, which was very pure, touched her heart, and the experience was truly wonderful.

In Japan, Shen Yun now travels to the Japanese city of Yokohama, followed by Tokyo, Saitama, Fuchu, Sakai, and Fukuoka, before returning to Kyoto’s ROHM Theatre for three more performances on Feb. 1.

With reporting by Niu Bin and Frank Fang.