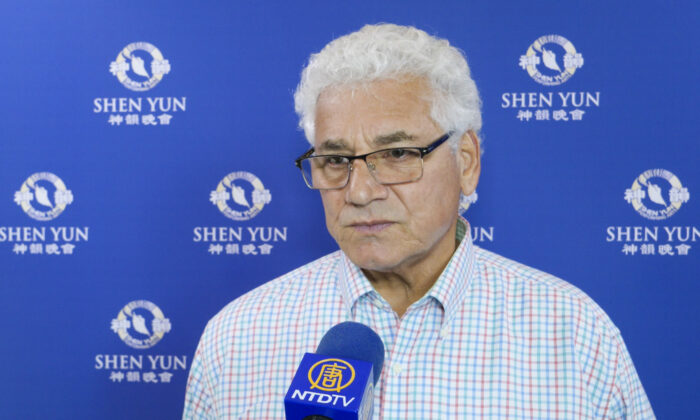 JACKSONVILLE, Fla.—Mike Ammirata, president of printing company Resource Solutions Plus, who attended a Shen Yun Performing Arts’s matinee, was grateful for the passion shown in the performance.

“I wish we could capture some of that spirit in the States right now,” he said after watching Shen Yun at the Thrasher-Horne Center at St. Johns River State College.

New York-based Shen Yun is a classical Chinese dance and music company that tours the globe each year, mesmerizing audiences with its exhilarating dance performances.

Mr. Ammirata thinks Shen Yun can have a positive impact on society as it tours the world. He said Shen Yun asks people to look to God when searching for answers. “We need more compassion, and we don’t have enough of that.”

He hopes that people will open their hearts and accept the message Shen Yun is trying to convey.

He commented on the skill and commitment of the performers. “They work so hard, it’s obvious that it’s a commitment from inside. They are committed to share their faith with the world, so they work hard to do that. It’s very exciting.”

Hope for the Future

“I loved how everything comes to life,” said Senior Director and Project Management, for Mesoblast, Michael DiMuro. He loved the visual experience of the performance and how it seemed divinely inspired.

“Human life is precious and needs to be enjoyed and celebrated. And that’s the message I’m getting from … [the performance] because the whole show is a celebration of life.”

He said the whole show is uplifting.

Mr. DiMuro said the last few years have been depressing, but the show “reminds us of what’s important: that life is important.”

Shen Yun shows “there’s hope for the future. No matter how dark things look, there is always hope.” Even though in China there is oppression and communism, “but still the culture transcends and goes beyond and continues, and it cannot be suppressed or destroyed,” he said.

The Epoch Times is a proud sponsor of Shen Yun Performing Arts. Audiences have responded in a resoundingly positive way since Shen Yun’s inception in 2006.