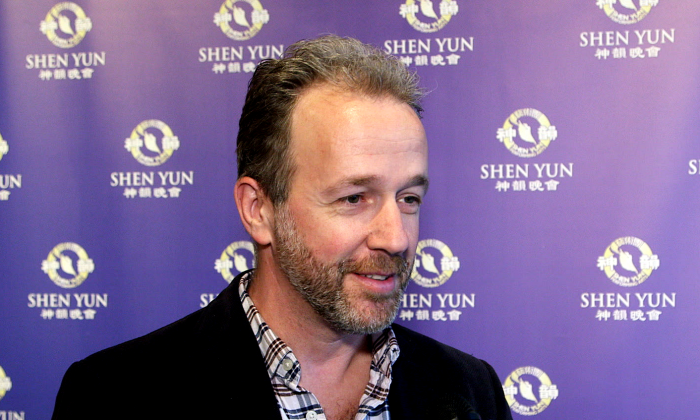 Yves Henry said he was very happy to have seen Shen Yun at the National Arts Centre in Ottawa on May 8, 2016. (NTD Television)
Canada

Shen Yun was founded on a mission to revive 5,000 years of divinely inspired Chinese culture, a mission that is relevant in the western world, according to Mr. Henry.

“Humankind has lost its way,” he said, noting that greed and force have become too common, and that the counter was to take a more spiritual path.

“I think it’s the most important thing we can do is to meditate and tune into the divine, if you will, the universe, or God, or whatever you call it, I think we need to connect and tune within.”

He said this was an idea he saw reflected in Shen Yun.

He said Shen Yun encouraged him to look within and find peace and harmony with others.

“We’re so inundated with technology and crazy ideas of having belongings and physical things which are not important. So this is a very important message.”

In ancient times China was known as “Land of the Divine,” meaning the country’s culture and classical arts were believed to be bestowed by the heavens. Ideals such as benevolence, propriety, respect for the heavens, and divine retribution originate from the teachings of Confucianism, Buddhism, and Taoism, forming the essence of the culture, which Shen Yun depicts in its performances.

It is a culture that Linda Fong, another audience member that afternoon, feels her granddaughters should get to know, so she brought them to the performance.

“I was here five years ago and we really enjoyed it,” she said.

“I want to share the culture [with them] because I’m part Chinese, and I want my granddaughters to enjoy the culture,” said Mrs. Fong.

“The costumes were marvellous. I loved the colours. All the [dancers] also looked so happy.”

“You can learn a lot,” added Chrissie, one of Mrs. Fong’s granddaughters.

This divine aspect of the culture resonated with Mrs. Fong.

“It was very spiritual. It makes you feel good inside—feel whole. Like they said, all the wealth in the world is nice but if you don’t feel good inside, it’s not so good,” she said.

“You get to learn the story and I thought it was very fulfilling,” said Mrs. Fong. “I find it shows you the good from the bad, and the good of course always comes out on top.”

Barbara Nault, who works in healthcare, also attended the matinee. She said it was a moving experience, tearing up as she shared her thoughts on Shen Yun.

“The talent is marvellous and [the] colours, the story, because it’s about faith. It’s beautiful, it’s what we need in the world, we need to spread that.”

Reporting by NTD, Donna He, and Joan Delaney