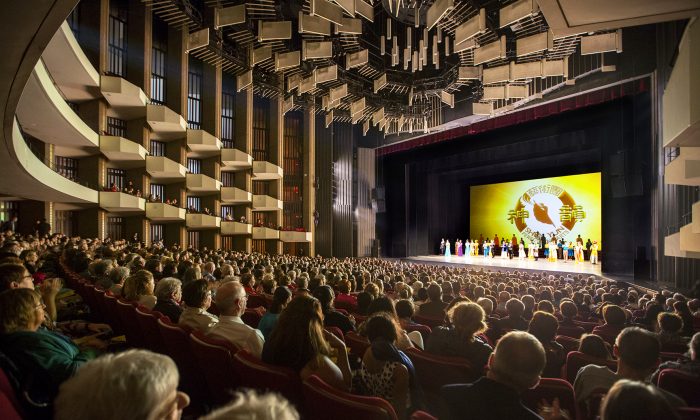 Shen Yun performers take a curtain call at a sold-out National Arts Centre in Ottawa at the end of the matinee show on May 8, 2016. (Evan Ning/Epoch Times)
Canada

‘I’ve never seen anything so well done in my life,’ Ottawa Writer Says of Shen Yun

OTTAWA, Canada—Ottawa writer Hugh McCord was blown away by Shen Yun Performing Arts’ closing show at the National Arts Centre on the evening of May 8. He was just one among Ottawa theatregoers who appreciated the classical Chinese dance company’s efforts to revive China’s divinely inspired 5,000-year-old culture.

“I was absolutely astounded at the extravaganza—the colour, the artistry, the choreography, the impeccable timing. I think it is a sight for sore eyes and also a sight for anybody’s eyes that has never been to a live performance like this,” said Mr. McCord, who recently released a book of short stories titled “Personal Reflections of Ottawa Past.” He previously worked for the Canadian Intellectual Property Office for 23 years.

“The drums were good, the timing of the choreography—I’ve never seen anything so well done in my life,” Mr. McCord said.

Catherine Kuhn, who helps self-employed people run their businesses in her work at the Carleton Place Chamber of Commerce, echoed Mr. McCord’s comments.

Standing Up for Their Beliefs

According to the Shen Yun website, China’s ancient culture—including its customs, traditions, spirituality, and art forms—was virtually destroyed under decades of violent repression by the current communist regime. Fearing the culture would be lost forever, overseas Chinese artists formed Shen Yun in 2006 to keep the traditions alive.

“You can see the passion and it’s fascinating historically that now when you live in China right now you can’t express yourself that way,” Ms. Kuhn said. “It’s so sad.

“And yet the culture has grown because of that spirituality and all the beautiful things that have come out of it, so it’s kind of sad.”

For Anna Durand, the typical news that flows out of China, on balance, tends to not be positive, whether it be economic or social, but Shen Yun’s efforts began to change her perception of the country.

“This show is a beautiful side of China which—the historic dancing—I’ve never seen anything like this before. I never knew that it existed in China, so I feel I have a different view of China,” said Ms. Durand, a retired nurse.

As well as portraying tales and famous characters from Chinese history, Shen Yun features a few pieces that depict the plight of practitioners of Falun Dafa (also known as Falun Gong) in their peaceful resistance to modern-day persecution by the Chinese communist regime. In 1999, the regime outlawed the spiritual discipline, which teaches following the universal principles of truthfulness, compassion, and tolerance with roots going back to ancient times.

Mr. McCord was impressed by these pieces.

“Great meaning—the way [Shen Yun] portrayed [Falun Dafa], and the hope, and everything [it] involves. The future, the present, the past, and the procreation of man’s will to do good unto others is most important. And that is the problem with the world today. They’re not helping each other the way they should,” he said.

“I wrote a dissertation on the immigrant Canadian as well as the Muslim faith and so forth,” he continued.

“Everybody in the world has a right to practise their own religion no matter what it is. Anybody that denies that is a terrible wrecker of human rights. It is anti-humanity. Everybody is a human being. And everybody has an equal place on this planet. No one has the right to take that right away from you.”

Shen Yun portrays hope and the promise of a bright future for those with a firm faith in the divine and belief in virtue, despite adversity, and this spoke to Mr. McCord.

Francis Lamoureux, who attended Shen Yun on May 8 as part of a group of over 30 seniors from Hawkesbury, just over an hour’s drive from Ottawa, said, “I always have hope, [and Shen Yun] was reinforcing.”

Importance of Culture and Faith

For social worker Lyne Prescott, the spirituality and universal values portrayed in Shen Yun moved her very much.

“That’s probably why it touched me. We have to talk about this here, what’s happening in China. What I see here is it is so important to transmit the culture and the faith,” Ms. Prescott said.

“It touched my heart deeply. It’s wonderful. The colour, the choreography, the history too. All those young ladies and men are beautiful and smiling. I had emotions.”

“It is a wonderful show and we’d definitely come back to see it again,” said Ms. Durand.

Mr. McCord said he would tell his friends that the show “is something you have to see. … The actual beauty of it, the presentation, is beyond description.”