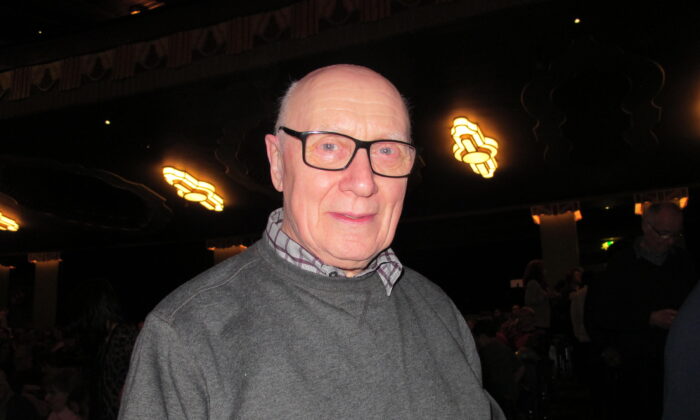 One of its seven worldwide touring groups is playing sold-out performances at the Eventim Apollo during January 2020. Today, on Chinese New Year, three different artists who were in attendance gave glowing reviews about their experience.

Master of Artistic Realism Blown Away by Shen Yun’s Colors

Colin Bradley has been encouraging people’s love of fine art and teaching them the skills to accomplish it for almost 40 years in England and around the world. His medium is pastel pencils and his specialty is creating pastoral landscapes and portraits of animals in stunning realism.

The amazing colors in Shen Yun caught his eye.

“That’s what attracted me of course, the color is spectacular. It’s mind-blowing,” Bradley said.

“I’m just amazed,” Bradley said. The performance was more than what he thought it would be, from seeing advertisements on the television.

The dancers’ movements left a deep impression on Bradley who said he was “stunned by them.”

“They really flow … serene kind of movements.” He added that the choreography was calming and mesmerizing.

Shen Yun seeks to revive traditional Chinese culture and share it with the world through art. “I think that would be wonderful, to be honest. I would be a wholehearted supporter of that,” Bradley said.

Bradley was sorry to hear Shen Yun cannot perform in China due to persecution inflicted by the communist regime against China’s authentic, deeply spiritual culture.

“You do feel very sorry and saddened by that situation,” Bradley said. “Let’s hope … maybe things will change. I’d like to think it.”

Bryan Edwards, a professional clarinet player, offered his response after watching Shen Yun closely and taking in the music of the live orchestra.

“I play the clarinet so I’ve been listening very carefully to the young man playing the clarinet in the orchestra: very, very good. Very good. Lovely tone,” said Edwards, who also teaches at Doreen Bird College of Performing Arts.

“I’m enjoying the live orchestra very much as well. I do like the mixture of the Western and the Eastern,” he said.

Shen Yun’s orchestra is unique for combining Western orchestration with Chinese instruments and melodies in a way that no other orchestra has done before.

According to Shen Yun’s website, “Traditional Chinese music emphasizes the expression of inner feelings—the ancients always used musical instruments to relate their states of mind. Western music, meanwhile, focuses on the overall effect of the musical ensemble—and to achieve that, arrangement and harmony are of utmost importance. Shen Yun’s music combines these approaches to capture the essence of both East and West.”

Edwards said that he felt “tremendous energy coming from the stage.”

“To all the performers on the stage actually and the people behind the stage as well,” Edwards wished “a very Happy Chinese New Year to everyone!”

While a painter produces images and a musician resonates with his instrument, an actress’ medium is her very own heart and mind. Perhaps that’s why Dannielle Gostling, a TV and theater actress, poured her heart out and found herself moved to tears while describing her experience watching Shen Yun.

“It was one of the most beautiful, spectacular things I’ve ever seen in my whole life. It was incredible,” she said.

“I thought it was incredibly profound and incredibly important and the bravery that it takes for people to use their skill and their craft and their artistry to tell a message that’s so important. When the narrator explained that this can’t be performed in China and the whole thing of being arrested and the meditation and then … It was so deeply moving because to hear that, this isn’t, we’re not talking about the past, this is things that are happening today,” Gostling said.

As she went on, she tried to fight back tears but ended up in an emotional catharsis over the plight of Falun Gong practitioners in China today.

“That’s what makes me a bit emotional because my husband and I meditate and to think that these people can’t do that in China and they’re persecuted for it, that was one of the main reasons that I booked because I read that online. And I thought ‘Oh my gosh!’  This is something that is to make people spiritual and to be the best possible version of themselves and live in this enlightened way and you’re persecuted for that!  And that was one of the things that really hit me from the performance of how essential and how pure and beautiful it is and how it should not be persecuted.”

Gostling recalled the pieces in Shen Yun that depict the Creator who, according to ancient Chinese legends, will one day return to earth for all mankind.

I’ve never seen anything as incredible. Every single dancer, every movement, I mean the choreography and the music and the composition, the whole thing was just magnificent.
— Dannielle Gostling

“I’d like to say to the performers: You were just … Look at you! I’ve never seen anything as incredible. Every single dancer, every movement, I mean the choreography and the music and the composition, the whole thing was just magnificent. But it was an energy, it was something that was felt in, kind of, my heart and my nervous system … thank you, I’m eternally grateful,” Gostling said.

With reporting by NTD Television, Mary Mann, and Brett Featherstone.