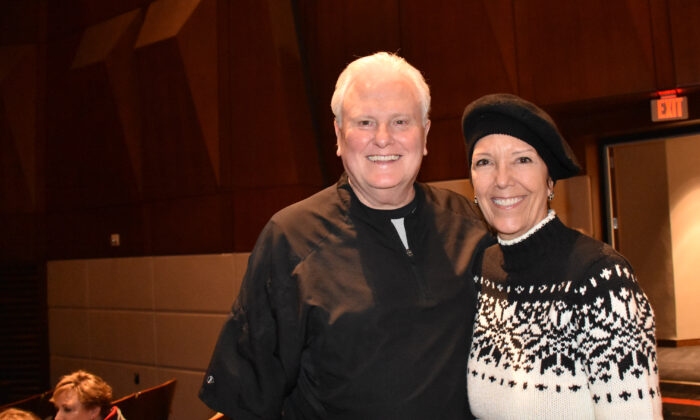 Ajax and Barbara Daugherty attended the opening show of Shen Yun Performing Arts after wanting to see it for three years, at the Eisemann Center in Richardson, Texas, on Jan. 11, 2020. (Amy Hu/The Epoch Times)

“It’s been spectacular … It’s well exceeded all my expectations. The color and the backdrops and the storylines all come together so nice. And it really gives a little insight into the history of Chinese people, too,” said Barbara Daugherty, a former marketing executive with food manufacturer Frito Lay.

Barbara attended the show with her husband, Ajax Daugherty, who formerly owned a car dealership. The performance was long anticipated by the Daughertys and they remarked on how happy they were that they attended on Jan. 11, 2020.

“It is fantastic. We have been looking at it for, I think it has been coming here for three years, and we noticed the signage for three different years … This is our Christmas gift for each other. I said, ‘We gotta to do this,’” Ajax explained.

“My brother lives in Louisville, Kentucky and is a retired pharmacist. I’m going to send this to him. He will love this, he will love it. We did. And we’re going to see it again next time it’s in town,” he added.

“The colors are so inspiring. … We feel very involved in the storyline. It made me very happy,” Barbara said.

The Stories Behind Shen Yun

The Daughertys welcomed the educational aspect of the performance and delighted in doing their “homework,” so to speak, by reading the program book and listening to the emcees who introduce each of Shen Yun’s storytelling dances and songs.

“Fortunately, we had read the booklet. So it gave me background on it. When the young couple comes out and says in English what’s gonna happen, I understand it, because we know the background on this. In the one scene where the sickle, the communist [the sickle and hammer symbol], we knew exactly what that was because we read about it in here [the program book]. So it is very exciting,” Ajax said.

“What I found was interesting was—that nobody in China can see [Shen Yun]. We talked about that. We said ‘That’s so sad’ because there is so much history there … It does make you feel sad to think about the persecution and some of the things that take place,” Barbara said, referring to the stories in Shen Yun about the persecution of spiritual followers by the Communist Party in China.

As part of Shen Yun’s mission to revive authentic Chinese culture, one deeply inspired by the divine, the artists themselves practice a type of self-refinement and meditation known as Falun Dafa. This traditional practice is among the most brutally persecuted in China today, which is why the company cannot perform there.

The Daughertys applauded the way Shen Yun included aspects of ancient China’s divine culture. Ajax mentioned scenes showing heavenly bodies, dancers that appear on-screen one moment and before the audience on stage in another, and how beautifully executed the “very family-oriented” performance was.

He also recognized a detail on stage that he found similar to his own culture.

“I just love to watch [the dancer’s] feet go ‘ch, ch.’ We’re Catholic. So we have been raised, our nuns that wear the habit, they walk like those ladies walk. You can’t see their feet,” he said with amusement.

The Dougherty’s admiration for Shen Yun didn’t stop there. Audience members regularly cite dozens of different aspects of the show that they appreciate.

“I think the staging is amazing. really well done. And the costumes,” Barbara said.

“When the ladies came out, they have the shoe in the middle of the foot. The heel, the high heel,” Ajax said.

“No heel at all!” Barbara added, referring to a Manchurian style of footwear that requires exceptional poise and balance to walk in. Shen Yun dancers don’t only walk in them, they dance.

Shen Yun means “the beauty of divine beings dancing,” and the Daughterys said they absolutely felt this spirit in the dancers.

“The title is ideal, ideal,” Ajax said. “And the explanation of it at the very beginning was priceless.”

“The one message that I got was ‘don’t use good for evil,’ with the magic flute [a story-based dance] … And ‘don’t do anything bad!’ Barbara said, giggling.