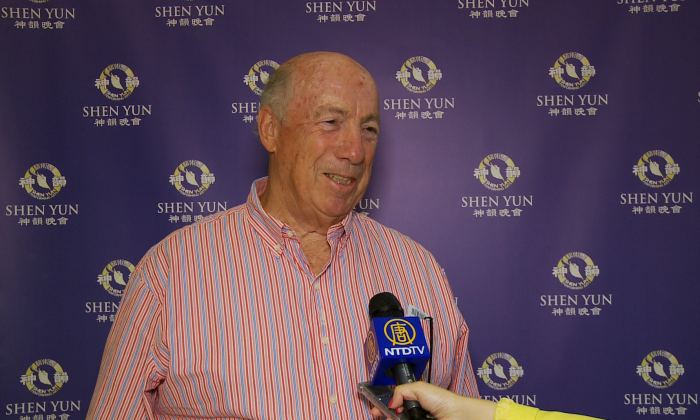 Don Taylor at Shen Yun’s performance at Centre In The Square in Kitchener-Waterloo on May 6, 2016. (NTD Television)
Canada

KITCHENER-WATERLOO, Canada—For the past five years, Don Taylor had wanted to see Shen Yun, a New York-based performing arts company that tours internationally each year showcasing China’s ancient traditional culture. He finally made it on May 6 for Shen Yun’s opening show at Centre In The Square.

It was worth the wait.

“I really enjoyed it,” Mr. Taylor said after the show. “It’s quite spectacular the way the music and all of the activity and the dancing, it all comes together. And I especially like the way it is done with the background. It is all integrated. It’s very, very lovely.”

“The costumes are gorgeous, the colours are gorgeous, all of the fans—everything,” added Mr. Taylor, a retiree who invests in real estate. He was formerly the president of a steel company in Winnipeg that made products for farm use.

The mission of Shen Yun Performing Arts is to bring about a renaissance of China’s divinely inspired 5,000-year-old culture and its inherent spirituality, which has been virtually destroyed by the current communist regime’s various destructive campaigns, particularly the Cultural Revolution.

The company does this through classical Chinese dance and live orchestral music, presenting vignettes from ancient legends and beloved stories from the classics.

Mr. Taylor was impressed with the lyrics sung by the vocal soloists, whose songs are rich with philosophical reflection about life.

“I was quite interested to see the commonality with the spiritual [aspect],” he said. “I thought that was quite spectacular and quite well done.”

He especially liked “Monks and the Red Guards,” a piece about monks in a monastery who possess supernatural martial arts skills.

“They’re running around everywhere and having a great time.” he said. “The choreography is quite exciting.”

Mr. Taylor said he thinks his friends would like to attend Shen Yun “and see the excitement, see the way the Chinese culture is expressed all through the history, and that we can experience that.”

Also at the May 6 performance were Helga and Adrian Boca, who had high praise for the dance and music while also appreciating the deeper connotations of traditional Chinese culture. Each of them said they believe in a connection to the divine and that it’s important to remember something beyond the material.

“I just didn’t know that back in China they are not allowed to think about it or talk about it or anything, that was a bit shocking,” said Mrs. Boca.

“Lots of people don’t have great values, they put a value on things and not in souls and a great creator of the Earth and humankind, which is too sad,” she said.

Mr. Boca said the last piece, “Hope for the Future,” contains “a great message—that hope is going to win all of the time.”

Jean and Kim Ruthig knew something of China before seeing the show, but Shen Yun took that understanding to new realms.

Mr. Ruthig said the performance left him in awe.

“It’s amazing. These guys seem to float on the stage. I just can’t believe how light they are and how long they stay airborne without hardly any effort. They’re just amazing,” he said.

Mrs. Ruthig said China hides much of what happens within its borders, but some issues do become known, like the persecution of groups such as Tibetans and the practitioners of Falun Gong.

“I’m really sad that this is still going on in China today. I was just hoping that the world is a little more liberal and everyone’s entitled to their own opinion, their own thoughts, their own feelings, their own beliefs. Apparently not. From what we were reading so far in the program that they can’t even go back to China. It’s sad,” she said.

She said Shen Yun did a good job of touching on these issues in its performance as part of the story of traditional Chinese culture.

“It’s being alluded to through the dance but they’re not dwelling on it. It’s really amazing to watch how they’re doing it,” she said.