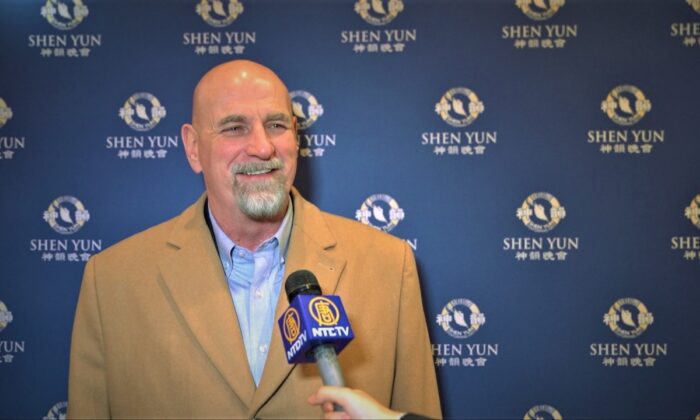 PHILADELPHIA—The curtain closed for the penultimate time at the Merriam Theater in 2020 for Shen Yun Performing Arts, the world-renowned classical Chinese dance company, after a month of shows, many of which were sold out.

George McReynolds attended the performance in Philadelphia and was certainly glad he did, calling it the best show he’s ever seen and the experience of a lifetime. The U.S. Army veteran owns a financial services firm and is an author, public speaker, and oft-quoted media personality in the field of finance.

“[Shen Yun] was incredible,” McReynolds began. “I’ve been looking forward to it. It filled all my expectations. If you are gonna see one show for the rest of your life, this is what you want to see. Between the costumes, the athleticism, the ballet, the backdrop was a work of art by itself, the special effects were just incredible. Absolutely the best show I’ve ever seen.”

“If I’m not waxing grandiose, it’s the triumph of humanity,” McReynolds said about what he’d take away from the experience. “Everything, the talent, the art that comes out in so many different ways, it’s just amazing.”

New York-based Shen Yun is spearheading what’s being called the Chinese renaissance, a revival of traditional Chinese culture which was once almost lost at the hands of the Chinese Communist Party. In this effort, Shen Yun utilizes classical Chinese dance, bel canto vocal performances, digitally animated backdrops, and more.

The incredible talent of everyone involved in the production was just superb.
— George McReynolds

“Every part of it, whether it was the costumes or the movements or the smiles of the dancers, it exudes emotion and feeling,” McReynolds said. “And I’m not a touchy-feely kind of guy, but it really just came through. I really liked the theme and the integrity, the faith, and the salvation, divinity, and spirituality was just a wonderful undertone. But the incredible talent of everyone involved in the production was just superb.”

The essence of Chinese culture is its spirituality, which Shen Yun continues through its narratives and the lyrics it presents, but also through a daily spiritual discipline that each Shen Yun performer inhabits. Falun Dafa is that practice, which is an ancient meditation way from China that teaches truthfulness, compassion, and tolerance.

Falun Dafa practitioners make appearances from time to time as characters in each Shen Yun performance, namely during storytelling dances that depict the unfortunate persecution they face in China today at the hands of the Chinese Communist Party.

But these pieces are seen as hopeful, due to the compassion, faith, and forgiveness these characters exhibit, both on stage and in real life under such tyranny.

“[Shen Yun] wasn’t proselytizing any one religion,” McReynolds said. “That’s why I didn’t use the word religion—I used spirituality, integrity, faith—it’s about all those things. But not about religion. So that yellow book … could have been the Talmud, could have been the Bible and it’s that underlying spirituality that really connects us all and it brought it out brilliantly.”

So many parts about the artistry in the performance touched McReynolds.

“What moved me, the colors really got my attention. They were so brilliant and the things they did were simple, things like cloth and the way they moved them. … [Shen Yun’s dancing] is beyond anything I’ve ever seen.

“And the music was great. How she could make all those sounds on, really, a two-stringed violin [erhu], that was just amazing, but the choreography and the music was wonderful … and I loved the narrators going between, they were really great.”

“I absolutely was moved by [the performance], goosebumps moved, it was that incredible,” McReynolds said, who added high praise for the tenor of the evening.

The business owner, author, and speaker said he would spread the word about Shen Yun and its renaissance of Chinese culture. “Oh, this is incredible. I can see why the communists don’t like it. But I’ll do my part to promote it. I think everyone should see this.”