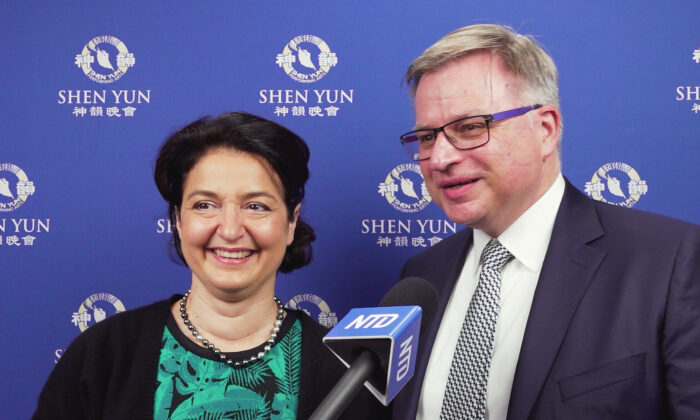 MANNHEIM, Germany—To designers with a sense for fashion, Shen Yun Performing Arts is certainly a feast for the eyes and an evocation for creativity.

The costumes seen in New York-based Shen Yun are inspired by the attire from the different dynasties of China’s 5,000-year-old story. And each headpiece and robe is designed and handcrafted each season for Shen Yun’s all-new productions.

“What I’ve always found impressive about Chinese fashion and culture are the clear colors and the way they are contrasted. For a long time, we didn’t dare to use red and pink together in Europe, and also orange. All of a sudden, it was fashionable. And this year, we also have a very colorful fashion. We have entire collections in pink, in green, in blue. And at the same time, what impresses me very much is the way these colors are combined, also in their clarity,” Ms. Fuchs said.

Markus Ludwig is a civil engineer and he noticed that the architecture featured in Shen Yun’s backdrops were an art that not many engineers understand today.

“This is an art that has been lost in technical timber construction here. Well, very few carpenters are still able to make classic wood connections that are mastered there,” he said.

She said the performance reminded her that “the material does not count.”

“One also has another dimension, which one should not forget. And that it’s actually not the main thing, that you now have a reputation and you have money—you can’t take that with you. I think that’s always a very important message and it’s always current.”

“What has been lost a bit in the West is this spirituality, which is very important in Chinese culture. This certainly also ensures that we in the West are very rushed, very success-oriented, and we often do not realize that it would be better to slow down and [you] realize that you can reach your goal just as quickly,” added Mr. Ludwig.

Shen Yun Performing Arts is dedicated to presenting “China before communism” to audiences around the world.

“I was happy to learn something about China. Through the stories, you realize what a great nation, what a wealth that [China] is,” Ms. Fuchs said.

She added that with the conclusion of the performance, “I have the music in my head. I’ve got those very fluid movements—those ‘Water Sleeves’ at the beginning, that was amazing.”