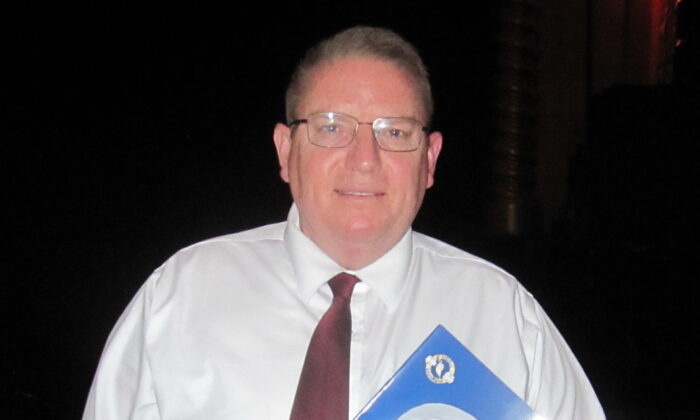 MELBOURNE, Australia—Kim Rowlands, an internet content producer and business owner who used to work for the Australian government, was impressed by the harmony and the storylines in Shen Yun Performing Arts when he saw the performance.

From the first moment the curtains opened at Palais Theatre on April 23, Mr. Rowlands said he felt uplifted.

“I felt strongly that it was almost like representing the old Gate of Heavenly Peace,” he said.

“There’s a great symbiosis between the music, the orchestra, the feeling of the performance, and the divine—it is a complete harmony.”

Shen Yun artists and performers look to the divine for their inspiration. This plays out in the performance, which Mr. Rowlands said was in accord with his own personal beliefs as a Christian.

New York-based Shen Yun was formed in 2006 with the mission to revive China’s traditional culture, which had almost been lost under the tyranny of communism. In fact, the company says it presents “China before communism.”

Ancient Chinese people believed their culture to be divinely bestowed, calling China the “land of the divine.” However, the atheistic communist regime of modern China sees this spiritual heritage as an ideological threat.

“The overwhelming message I get is the joy and hope in the performance of these dances,” he said.

“When I think of current controversies surrounding the Chinese Communist Party, we look back at 1989 and all the other surrounding events. This stands out much stronger than any message a dictator could send.”

Mr. Rowland was inspired by the inner spirit of the dancers, and praised what he saw as their projection of their inner selves.

“I look at their faces. They’re very young, and they’re just beautiful people,” he said.

“They’re projecting this light heavenly feeling, but they’re performing complex performance. And it looks like they’re almost moving on a divine wind.”

Mr. Rowlands congratulated Shen Yun‘s artistic director and encouraged the company to keep touring so more people could experience the performance, which he said he found to be like a light on a city on a hill that was beaming.

He added that Shen Yun deserved to perform in the grandest halls and theatres on Earth, “because it’s second to none.”

‘I Have Never Seen Anything So Beautiful’

Also sharing the beauty of Shen Yun on April 23 was Yasmin Islek, a model actress and one of “Australia’s Top Established Petite Models.”

Ms. Islek has modelled for companies such as L’Oréal Paris and Lancôme, including Dannii Minogue’s Petites Collection. She has also aired on popular TV shows such as Neighbours and The Left Overs.

Speaking on the beauty of the show, Ms. Islek said that it was breathtaking.

“I have never seen anything so beautiful. It flowed so nice and the performance was just magical and unreal.”

Shen Yun believes that traditional Chinese dancing and music all came from the divine, and endeavours to portray that through their performances—connecting the physical reality with the divine throughout the program.

Talking about the spiritual aspects of the show, Ms. Islek said that the performance was uplifting.

“I had shivers literally throughout the performance,” she said.

Ms. Islek said she particularly resonated with the story on a pair of soulmates being reconnected despite living in timelines 300 years apart.

“I’m on a little mission to find my own soul mate so it really connected to me because it felt so beautiful.”

She added that being able to return to the theatre to appreciate Shen Yun gave her an overwhelming sense of appreciation of freedom.

“I just appreciate it so much more its overwhelming,” Ms. Islek said.

“Being able to come out and watch this performance is so breathtaking and beautiful.

“I can’t wait to watch it again if they come again next year.”

“All of humanity really can take a message that Shen Yun is bringing through their art and through their spirituality to the rest of the world.”

Established in 2006, Shen Yun tours the globe every year with world-class Chinese dancing and music performance.

Mr. King added that Shen Yun’s spiritual message stood out to him, and he loved how the performance conveyed the connection of the spiritual to the physical.

“A nice combination of that uplifting energy from a spiritual sense, but also the beauty of the performance was exquisite,” Mr. King said.

Shen Yun has also brought modern stories in China to the fore—especially stories related to the persecution of Falun Dafa in China.

Falun Dafa, is an ancient spiritual practice that is based on the principles of truthfulness, compassion and forbearance.

“I think it’s atrocious that they can’t actually practice their own spiritual beliefs and their own homeland,” Mr. King said.

“I think that’s a terrible thing to be happening in the moment.”

However, he expressed that “the spirit” of Shen Yun will shine through their creations.

“Shen Yun [performing] right around the world is an example of the conquering of any kind of negativity and fear, with beauty and the human spirit—I think that’s wonderful.”