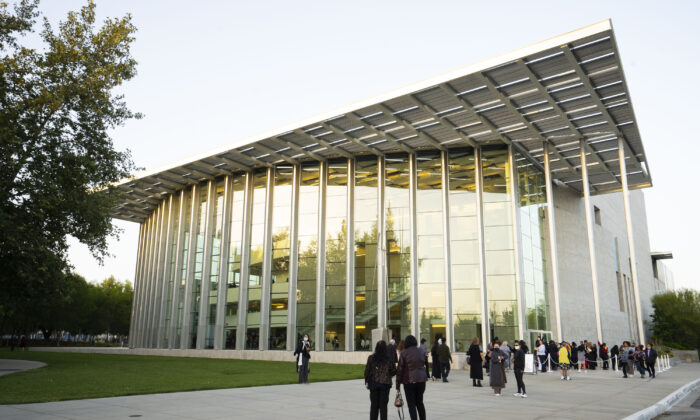 The Younes and Soraya Nazarian Center for the Performing Arts in Northridge, Calif., May 4, 2022. (Ji Yuan/The Epoch Times)

NORTHRIDGE, Calif.—Dr. Donald Eisner, a psychologist, author, and founder of the Eisner Institute of Professional Studies, and his wife Jordan, waited a long time to see Shen Yun Performing Arts.

The world’s foremost classical Chinese dance and music performance, Shen Yun is etched in the memories of people who just know that it is a performance they cannot miss.

“I’ve been wanting to attend like ten years,” said Mrs. Eisner after watching Shen Yun at the Younes and Soraya Nazarian Center for the Performing Arts.

Shen Yun’s mission is to revive the 5,000 years of divinely imparted Chinese culture from before the communist era.

“And finally, a couple of years ago, I bought the tickets. I had to wait longer because of the COVID [pandemic.] I wanted to see the costumes, the dancing. It’s beautiful, beautiful art,” she said.

“I loved the flower dance,” said Mrs. Eisner referring to the piece “Plum Blossom in Spring” which demonstrates the fortitude of the plum blossoms as they transition from winter to spring.

Shen Yun also portrays stories through classical Chinese dance, accompanied by a live symphony orchestra comprised of Eastern and Western instruments. Each dance piece displays the essence of the traditional Chinese culture’s core values, through stories from ancient times to the present day.

Mr. Eisner said the performance was excellent and spectacular.  Shen Yun’s creativity and hard work are inspirational, he added.

“I’m inspired by … the amazing work they did with the background and the scenery. [The actors] come from the back and pop out of the screen—it’s just amazing!” exclaimed Mr. Eisner.

He appreciated the emcees who came out to give a brief introduction before each piece.

“It’s well-organized. I like that [the emcees] explain it because otherwise, you keep looking at the program,” said Mr. Eisner.