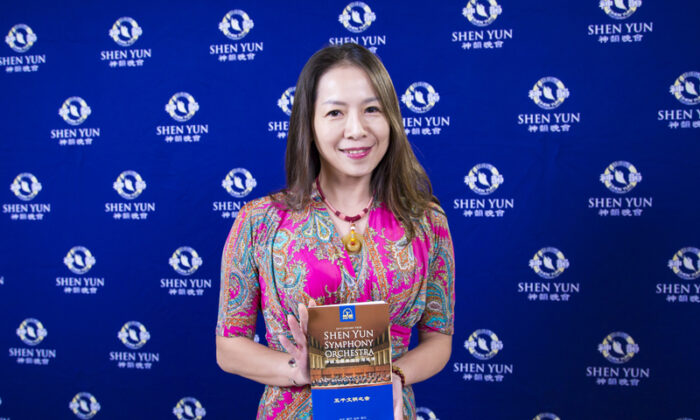 Hou Cui-ling was captivated immediately when seeing the first piece, “The World Divinely Restored,” was performed. “As soon as the gong sounded, there seemed to be many fairy maidens entering heaven with a ribbon dance,” she said. “Though we were in the performance hall physically, our souls were brought to the firmament.”

“[Shen Yun music] seems to enable us to transcend time and space, and usher us into another dimension,” she added. “It made us feel relaxed and carefree as if we were in a fantastic environment.”

As explained in the Shen Yun website, “The Shen Yun Orchestra combines the spirit, beauty, and distinctiveness of Chinese music with the precision, power, and grandeur of the Western symphony orchestra. The result—two great traditions producing one refreshing sound.”

Having attended Shen Yun concerts many times over the years, she said, “It’s a perfect performance that is worth inviting others to—to appreciate it together.” Hou Cui-ling believes that the success of Shen Yun’s performance has something to do with its musicians’ spiritual practice. “Since all of them are cultivating decent principles, they are people with positive energy,” she said. “What they disseminate is distinctive energy, so we feel uplifted after attending the performance.”

“As a [Shen Yun concert] has positive energy with healing effects, all aspects of our lives, including our minds, can be energized and boosted,” she said.