'The whole storyline was just epic' 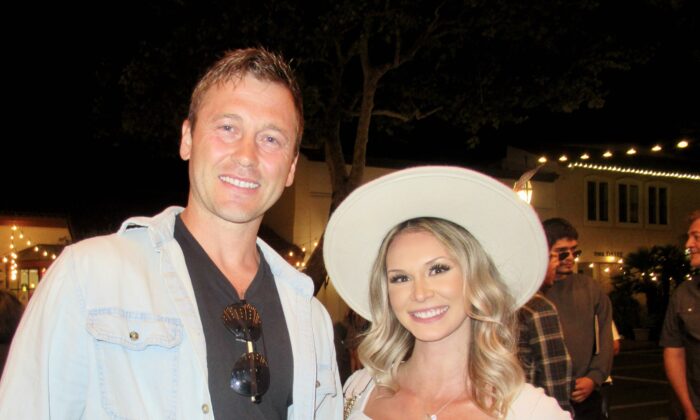 SANTA BARBARA, Calif.— “It was absolutely wonderful,” Tom Crisp, a stuntman who has acted on TV and in many films including “Top Gun Maverick,” said of Shen Yun Performing Arts. “Great dancing, wonderful in motion, in expression.”

Mr. Crisp and his wife, Emilie, were attending Shen Yun at The Granada Theatre in Santa Barbara, on May 28.

Shen Yun, based in New York, uses the art form of classical Chinese dance and ethnic dance, together with a live orchestra, to revive China’s 5,000-year culture, which was nearly lost under the rule of the Chinese communist regime.

Mrs. Crisp was very impressed by the performance.

“I loved it. It was beautiful, the costumes were amazing. All [this] sparkliness … and I feel like you could really feel the story when they were dancing.”

She particularly enjoyed “Plum Blossom in Spring,” a dance that portrays the courage of plum blossoms as they brave the winter cold. emerging before the spring arrives.

It was a fortuitous occasion for the couple as they happened to be passing by the theatre and were intrigued by what they saw. As it was Ms. Crisp’s birthday, they decided to celebrate and brought tickets shortly before the performance began.

Mr. Crisp was spellbound by the entire performance.

“[I was] just inspired by the value and in awe of the dance. The symphony took me away with the dancing. And the whole storyline was just epic,” he said.

Mr. Crisp described his Shen Yun experience as “a wonderful cultural experience from the past to the present.”

“It is a divine pleasure to sit and witness,” he said.

Also present were Alyona Bragina, a professional dancer and gymnast from Ukraine, and Christian Larson, an accountant.

Ms. Bragina said she understood the work necessary to create the level of professionalism shown by Shen Yun’s dancers.

“The dancers were perfection. They are elegant,” she said. “Their eyes were looking up, not on the floor. And when they leaped, they were soundless, which is so important,” she added.

She was touched by the dance “Insanity During the End of Days,” a story of spiritual people who are arrested for their beliefs. The dance depicts the death of a Falun Dafa practitioner who is murdered by her unwitting father, who is a communist party official, for her organs. Falun Dafa is an ancient Chinese spiritual practice rooted in the Buddhist tradition. It is currently banned in China.

“So deep, so many emotions. It was not just like dance, it was really an amazing story. I was really sad and I wanted to cry,” Ms. Bragina said.

With her background in rhythmic gymnastics, Ms. Bragina thought that some of the dances were particularly beautifully performed.

“I like the amazing [movements] with ribbons because in rhythmic gymnastics we use [them]. They are really professional girls,” she said.

Mr. Larson was impressed by Shen Yun’s use of technology, which he said was quite unexpected.

He was also surprised to learn that Shen Yun’s orchestra, a blend of classical Western and traditional Chinese instruments, was a live performance. “Very well put together, right on cue, everything is great,” he said.

“The message was … peace and harmony, and that we will eventually be saved. It teaches, probably all of us, to have really good humanity across the board, to love each other, to work with each other,” he said.

“They’re doing a great job. It’s wonderful to see such amazing athletic dancers perform. We’d like to see more of what the culture should be or was,” he said.

“We really enjoy their hard work, you can see that they put in many years. We’re both athletes and so we understand what it takes to train for these [performances].”