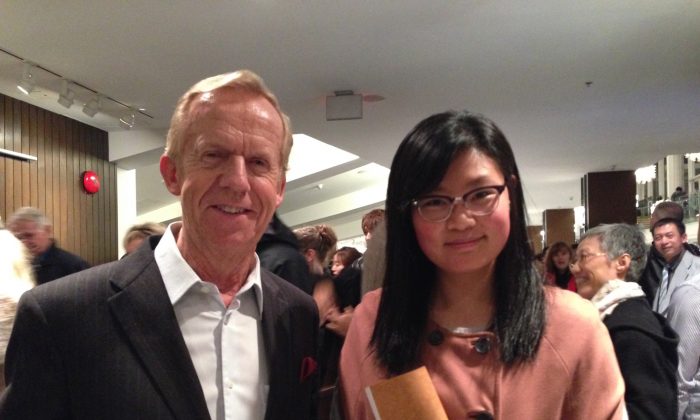 Erik Dysthe and his companion Suzie at the Shen Yun Performing Arts show at the Queen Elizabeth Theatre on Jan. 25, 2014. (Epoch Times)
Company

VANCOUVER—Shen Yun Performing Arts delighted the Vancouver audience with its final performance for 2014 at the Queen Elizabeth Theatre on Saturday evening.

Erik Dysthe was among those who had the chance to attend the performance, features classical Chinese dance and music.

“I thought it was actually very, really nice; I enjoyed it,” said Mr. Dysthe, who before retirement held executive positions with different utility and telecommunication companies. He now sits on the board of a number of companies.

“I thoroughly enjoyed it.”

Based in New York, Shen Yun was formed in 2006 by leading classical Chinese artists who aim to revive China’s divinely inspired culture.

Besides classical Chinese dance, which is at the hart of Shen Yun, the company’s performances feature a unique orchestra that combines traditional Chinese instruments with classical western instruments, hundreds of colourful hand-made costumes, and state-of-the art animated backdrops.

“It’s a beautiful show. I would recommend people to go see it. I would definitely come back next year.”