‘It was my greatest pleasure’ to Attend Shen Yun, Says Pianist 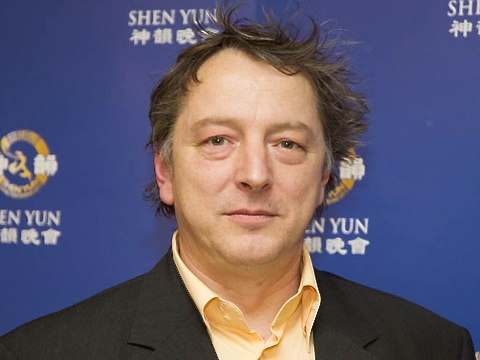 Pianist Mr. Andreas Seipp was impressed with many aspects of the Shen Yun performance, but he was impacted most of all by the piano performance. (Courtesy of NTD Television)

FRANKFURT—Mr. Andreas Seipp is a pianist who performs at various venues, a chamber musician, an accompanist at the Cologne Opera, and a music teacher at a Cologne, Germany, high school. He attended the Saturday night New York-based Shen Yun Performing Arts New York Company show at the Frankfurt Jahrhunderthalle.

Mr. Seipp bought a ticket to the Shen Yun show after having read up about the group on the Shen Yun website: “A Shen Yun performance features the world’s foremost classically trained dancers, a unique orchestra blending East and West, and dazzling animated backdrops—together creating one spectacular performance.”

“I’m impressed with this wonderful show, the unique orchestra, and the fantastic choreography,” said Mr. Seipp. “The musical arrangements can be counted among the top class—especially the mixture of Chinese and European instruments that work in such unison and present such a harmony of sounds.”

“Tenors, sopranos and other award-winning vocalists perform piano-accompanied solos, along with a regular favorite—the stirring melodies of the two-stringed erhu, also known as the Chinese violin,” states Shen Yun.

“It was my greatest pleasure to be at that show,” Mr. Seipp added.

Shen Yun’s animated backdrops present audience members with the lyrics of all the songs, as well as project landscapes, deep forests, celestial paradises, and Mongolian prairies to enhance the performance on stage.

“I not so much listened to the soprano singer, but had my eyes and ears open for the pianist that accompanied the singer,” said Mr. Seipp. “This was a marvelous piano debut. The musician listens very carefully when the instrument of his expertise is being played.”

“Coming back to the orchestra, I must repeat that they emanated great harmony,” he said. “And then one finds out that these were all new compositions—impressive.”

“In a collection of short pieces, audiences travel from the Himalayas to tropical lake-filled regions; from the legends of the culture’s creation over 5,000 years ago through to the story of Falun Dafa in China today; from the highest heavens down to the dusty plateaus of the Middle Kingdom,” states Shen Yun.

“I came alone tonight and will tell everyone in glowing tones what I have experienced tonight,” concluded Mr. Seipp. “I will touch on the different scenes, the colors, and the folk dances, and make them wish that they would have come along to tonight’s show.”