‘It Doesn’t Get Any Better,’ Says Medical College Dean After Seeing Shen Yun 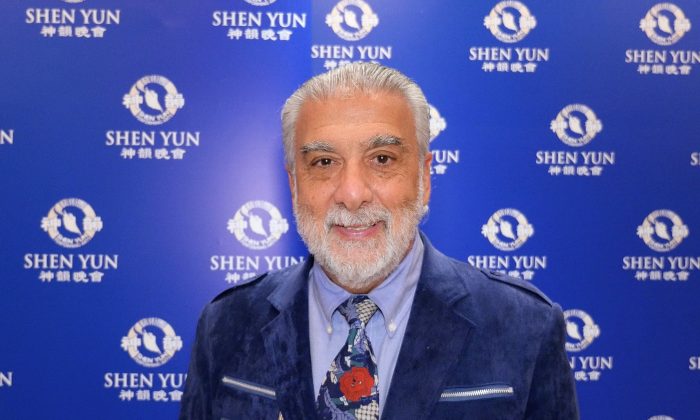 Jerry Cammarata, Chief Operating Officer and Dean of Student Affairs at Touro College of Osteopathic Medicine, after seeing a sold-out showing of Shen Yun at the David H. Koch Theater at Lincoln Center on Jan. 15, 2016. (Courtesy of NTD Television)

It’s a cultural heritage that has largely been lost, because the Chinese Communist Party has attempted to stifle and destroy it with movements like the Cultural Revolution. But Shen Yun is bringing it back.

“In a place like New York City, to have this kind of talent, and to be culturally stimulated and energized, it doesn’t get any better,” exclaimed Jerry Cammarata, Chief Operating Officer and Dean of Student Affairs at Touro College of Osteopathic Medicine, after seeing a sold-out showing of Shen Yun at the David H. Koch Theater at Lincoln Center on Jan. 15.

Mr. Cammarata is a man of enthusiasm, accomplishment, and dedication. He has led a government commission, worked as the associate director at Coney Island Hospital, served on the New York City Central Board of Education, written a book on fatherhood, and served as the United Nations Liaison to the World Safety Organization.

“Being the capital of culture means that this is the kind of performance that should not be missed by anybody. You can go to our museums, you can go to our Broadway, but when you see this kind of talent, you realize it’s unique and it’s valuable and it must be sustained,” Mr. Cammarata said.

New York-based Shen Yun Performing Arts celebrates traditional Chinese culture on stage through a combination of classical and ethnic Chinese dance, a live orchestra combining Eastern and Western instruments, an animated backdrop, and vibrant costumes. Together, these elements transport audiences through time and space to the Middle Kingdom, a land of honor, spirituality, beauty, and morality.

Mr. Cammarata exalted Shen Yun for its mission of preserving a largely lost culture—a culture that the Communist regime China has systematically tried to destroy over the last three generations.

“Often traditional culture is being missed. And after generation and generation, a lot of these cultural opportunities kind of drift by the wayside, and we go into new things. But we should never be disappointed by what our cultural tradition is. And we should honor it and cherish it and frequent it, as much as we possibly can,” he said.

Because Shen Yun celebrates traditional Chinese culture and spirituality, the company tours the world but is banned from performing inside China itself.

Mr. Cammarata felt the performers of Shen Yun, through their art, perfectly conveyed an emotional and philosophical message of freedom—the freedom to express yourself in your community or country, he said. “The performers want that. They’re telling us that we should applaud that, and of course, the hope always is that all of us around the world will always experience that.”

Within the performers, he saw sincerity and dedication. All the Shen Yun artists, he said, “have bought into their culture, honor their culture, and they really want everybody else to enjoy it,” he said.

“They’re not only talented, but you can see the enthusiasm that just comes from their muscles, from their mind, and from their emotions,” he said.

Although tickets are sold-out for Shen Yun’s January run in New York City, the company will be returning to New York City in March for another string of performances.