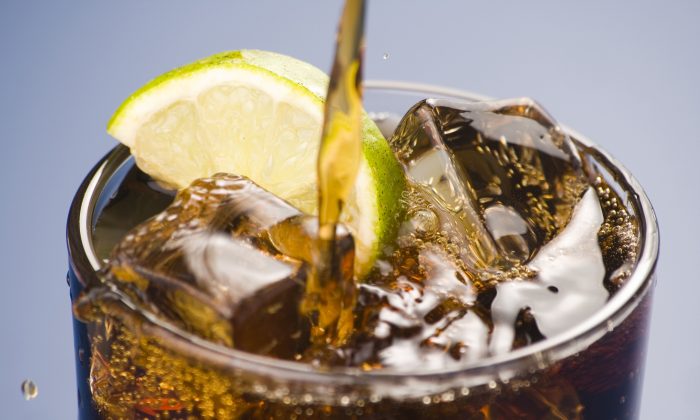 Although they may not have many calories, studies have linked synthetically sweetened diet drinks with increased risks of weight gain, diabetes, and cardiovascular disease. (Antonio Muñoz Palomares/Thinkstock)
Mind & Body

It can take a lot of money to carry out a careful study. The influence of corporate funding has been known to leave a black eye on the good faith of the scientific method, and the conclusions that emerge can significantly undermine public health.

A new study from the University of Colorado and published in the June 2014 issue of the journal of The Obesity Society “confirms definitively” that diet beverages are an effective weight-loss tool.

This conclusion conflicts with a handful of long-term observational studies that suggest that diet soda drinkers may have an increased risk of weight gain, diabetes, and cardiovascular disease.

Another point to consider is the study’s sole funder: the American Beverage Association.

How much are research results influenced by study sponsors? A 2007 study seems to suggest quite a bit. A report published in PLOS Medicine found that corporate-funded soft drink trials were four to eight times more likely to reach conclusions favorable to sponsors’ interests.

Of course, this phenomenon extends beyond soft drinks. Researchers who observed the trend while comparing outcomes of drug trials in the mid-1980s called it “the funding effect.”

Scientist and regulator-turned-writer David Michaels suggests that the funding effect is no accident. In his 2008 book “Doubt is Their Product,” he says industry science is designed to make its products look good, even when independent studies say otherwise—a strategy he calls “manufacturing uncertainty.” Michaels points not only to blatant examples of misconduct, but also to subtle details that ensure a favorable outcome.

It can take a lot of money to carry out a careful study, and experts say that some of the best trials science has witnessed are thanks to industry support. But the influence of corporate funding has also been known to leave a black eye on the good faith of the scientific method, and the conclusions that emerge can significantly undermine public health.

Big tobacco has the most notorious reputation in this regard, but the scheme took decades to reveal.

In the 1950s, doctors were promoting the virtues of cigarettes. By 1965, the U.S. Surgeon General released its first report on the dangers of smoking, but conflicting studies in serious journals meant scientific consensus still fell short.

In 1994, tobacco industry representatives testified before Congress that, according to a wealth of research, smoking was not addictive and that its effects on cancer and heart disease were still inconclusive. Just a month later, confidential documents emerged that showed that the industry knew for decades of tobacco’s deadly effects, so they designed and paid for numerous tests to prove otherwise.

Some may argue that an impeccable trial and rigorous adherence to the scientific method can result in a study that remains free from the influence of the corporation funding it. But history has shown that many distinguished researchers have their price.

Mother Jones’s December 2012 article “Big Sugar’s Sweet Lies” tells the story of how an industry armed with a powerful PR department and several influential scientists were able to distract regulators from recognizing sugar’s harm to health.

The article examines 1,500 pages of internal documents discovered in the archives of now-defunct sugar companies, as well as papers of recently deceased researchers loyal to the industry.

One such scientist was Fredrick Stare, chairman of the department of nutrition at the Harvard School of Public Health in the 1950s, who also had strong financial ties to the biggest names in the food and beverage industry. While some researchers found evidence linking sugar consumption to serious diseases (obesity, diabetes, and cancer), Harvard’s numerous industry-funded studies found only mild problems.

Stare’s conflicts of interest were revealed in a 1976 exposé by the Center for Science in the Public Interest, but his work continues to influence regulators who still believe sugar to be virtually harmless.

When it comes to sorting out the true scientists from the corporate cronies, genetically modified organisms (GMOs) are perhaps the most polarizing example.

Those who are concerned about the safety of GMOs say that only industry funded studies show favorable results, while supporters of the technology discredit the research methodology that has shown problems.

Although GMO advocates insist they have a consensus on GMO safety, due to the influence of several high-ranking U.S. regulators with strong ties to bioengineering firms, corporations have the discretion to reject tests before they are carried out if the study designs are potentially incriminating.

Also, a quarter of research funding at land grant universities comes from corporations, stacking the deck in the industry’s favor.

There is a well-documented trend of drug trials slanting toward favorable results when companies are paying for the research—even when the science is sound.

But the pharmaceutical industry has also produced its fair share of scandals and disasters—Thalidomide (birth defects), Fen-Phen (potentially fatal heart damage), Prozac (risks of suicide and birth defects), and Vioxx (heart attacks) to name a few.

Reye’s syndrome is a potentially life-threatening illness affecting the brains and livers of children. While no causal link has ever been proven, cases of Reye’s dropped dramatically after the public health community started warning the public against giving aspirin to children.

Reye’s syndrome was first identified in 1963. When researchers noticed a correlation of Reye’s with children taking aspirin, they urged regulators to take action.

But aspirin manufacturers complained of multiple flaws in the studies that revealed potential dangers. The dispute delayed calls for a public education program and prevented warning labels from appearing on aspirin bottles until 1986, following a lawsuit by Public Citizen’s Health Research Group.

Companies have been voluntarily removing Bisphenol A (BPA) from their packaging and plastic products for the past few years due to consumer concerns, but regulators still insist that, based on available evidence, BPA is safe.

However, more than 90 percent of government-funded studies reveal health problems resulting from low doses of BPA.

No health issues have been found in studies funded by the chemical industry.

Today lead is recognized as a deadly neurotoxin, even in trace amounts. But industry saw great value in lead at the dawn of the 20th century.

As evidence for lead poisoning grew in the 1920s and 30s, some doctors urged that lead paint be banned from homes. The lead industry fought back by funding its own university research, discrediting and intimidating researchers who found problems, and fighting any regulation that aimed to restrict the use of lead paint.

In the 1950s, the industry finally conceded that lead paint was indeed problematic, but continued to resist claims that smaller concentrations were dangerous. It took another 30 years to regulate lead levels in gasoline.

Asbestos is a fibrous mineral. Ancient societies found numerous uses for asbestos, but also observed lung problems due to exposure. A resurgence in asbestos mining emerged during the Industrial Revolution and it quickly became a useful material to modern industry.

In the early 1900s, researchers correlated pulmonary failure with asbestos exposure, but it would be decades before precautions were taken. Internal documents reveal that companies knew asbestos caused health problems as early as the 1920s, but continued to use it anyway.

Despite widespread agreement about asbestos toxicity today, the substance was never banned in the United States. A 1989 EPA effort to ban most products containing asbestos was overturned in 1991 due to pressure from the asbestos industry.