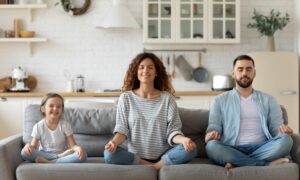 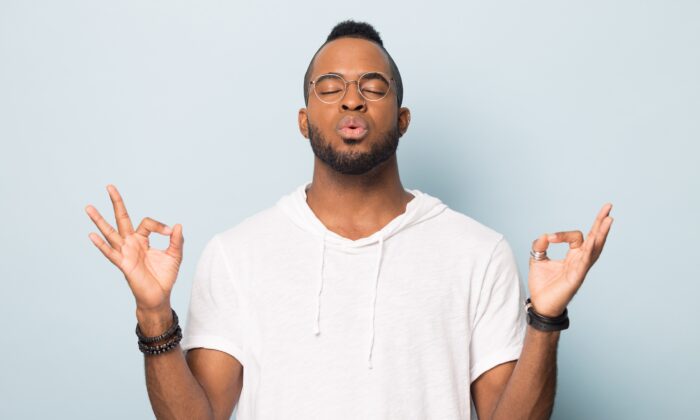 The body needs oxygen in volumes that many people fail to deliver due to inadequate breathing. Meditation and other disciplines often focus on this critical biological need. (fizkes/Shutterstock)
Mind & Body

Is the Way You Breathe Making You Anxious?

Breathing sets off a cascade of physical changes in the body that promote either stress or relaxation
By Kira M. Newman
biggersmaller
Print

But can just breathing really make a difference?

In the new book “Breath: The New Science of a Lost Art,” journalist James Nestor argues that modern humans have become pretty bad at this most basic act of living. We breathe through our mouths and into our chests, and we do it way too fast. There’s even a phenomenon called “email apnea,” when multitasking office workers breathe irregularly and shallowly, or even hold their breath for half a minute or more while glued to their devices.

Besides all the worrisome health problems this may cause—detailed pointedly in Nestor’s book—our ineptitude at breathing may have another big consequence: contributing to our anxiety and other mental health problems.

“The rate and depth we breathe at is a huge determinant of our mental state,” said Elissa Epel, a professor at the University of California–San Francisco.

Researchers such as Epel are exploring this by using breathing techniques—some new, some ancient—to help nervous people stave off anxiety. What they’re discovering is that breathing, something we do all the time anyway, could be an overlooked key to finding more calm and peace.

How Breathing Can Calm Us

We often try to tame anxiety by changing our thoughts—questioning the worst-case scenarios in our heads, interrupting rumination with some kind of distraction, or going to therapy.

But breathing offers a different approach, bypassing the complexities of the mind and targeting the body directly. Instead of trying to think yourself out of feeling anxious, you can do something concrete—breathe slow or fast, in a particular rhythm, or through a nostril—and sometimes find immediate relief.

In a 2017 study, highly anxious people were assigned to take a course in diaphragmatic breathing relaxation. They practiced twice a day at home. Diaphragmatic breathing, or belly breathing, involves breathing deeply into the abdomen rather than taking shallow breaths into the chest. After eight weeks, they reported feeling less anxious compared to a group that didn’t receive the training. They also showed physical signs of reduced anxiety: lower heart rate, slower breathing, and lower skin conductivity.

So, a regular breathing practice might help you feel calmer in your everyday life. But other studies suggest that focusing on your breathing in moments of acute stress could also be useful.

In an older study published in the Journal of Personality and Social Psychology, researchers brought participants into the lab and told them they were going to receive electric shocks. Some of the participants practiced breathing slowly before the shocks (which were actually never administered), while others focused on breathing at a normal rate or didn’t regulate their breathing at all. The slow breathers—at about eight breaths per minute—not only reported feeling less anxious while anticipating the pain; they also showed lower anxiety on a physical level, as measured by sweat and blood flow to the fingers.

Of course, breathing is an important component of many meditation and Buddhist mindfulness practices.

These benefits felt profound to the participants in a small, 12-week yoga breathing class in the United Kingdom. According to researchers from the University of Southampton:

“Participants described feeling ‘more in control,’ noting ‘anxiety doesn’t feel debilitating anymore.’ One participant reported marked increases in confidence, mindfulness, and spirituality; [and] greater ability to relax. … Three participants returned to paid employment, another was able to secure a long-desired job, and another became able to contemplate a return to work, having been unable to do so for many years.”

The Ripple Effects of Breathing

The way we breathe can set off a cascade of physical changes in the body that promote either stress or relaxation.

Technically, breathing influences the sympathetic (“fight-or-flight”) and parasympathetic (“rest and digest”) branches of our nervous system, and certain techniques can promote more parasympathetic calm and relaxation. Some may also cause us to release hormones such as prolactin and possibly oxytocin, the feel-good hormone of love and bonding.

Other techniques, such as tummo—a yogic breathing practice that involves forceful or gentle breathing, abdominal contractions during breath-holding, and visualization—actually amp up the sympathetic nervous system, spiking our body’s stress to activate a deeper relaxation afterward, the same way tensing a muscle and then letting it go works.

This is similar to the kind of breathing that “Iceman” Wim Hof teaches his followers, a method that Epel is currently researching. Hof is famous for his seemingly superhuman feats, such as climbing Mount Kilimanjaro in shorts and changing his immune response to E. coli, which he attributes to a finely tuned control over his own physiology thanks to breathing practices and more.

Fast breathing can be triggering for people with anxiety—causing the tingling limbs and lightheadedness that often accompany panic attacks—but that’s part of the point. When you breathe fast and start to feel symptoms that you normally associate with anxiety, it may help you re-interpret those symptoms in a less threatening way. They become less worrisome because they have a clear cause, the same way an elevated heart rate during exercise doesn’t bother us. And if you can connect anxiety to faulty breathing habits, it means you can change the way you breathe and potentially see some improvement.

How to Breathe Better

If you want to practice breathing for better mental and physical health, there are endless techniques you can try. Although these shouldn’t be seen as a replacement for therapy or a cure for severe anxiety, they can be a free, simple tool for both short-term relief and long-term benefit.

“Breathing techniques could be used as first-line and supplemental treatments for stress [and] anxiety,” write Ravinder Jerath and his colleagues in a 2015 study.

Many of the techniques that have been formally researched are derived from pranayama (yogic breathing) that dates back to ancient India:

In the same way that mindfulness practice isn’t just meditation, breathing as a practice isn’t just waking up every morning and doing 10 minutes of box breathing. Another important component is being aware of the way you breathe in everyday life (or while you’re checking your email).

In “Breath,” Nestor’s tips boil down to a short list of general principles: For example, make sure to breathe through your nose, slow your breathing down (to five or six seconds in and five or six seconds out), and extend your exhales for even greater relaxation.

So much talk about breathing might have you feeling anxious—that’s how I felt, at least, while reading about all the ways our breathing habits are faulty. In one study, the researchers noted that anxious people were skeptical in the beginning of the experiment and had some difficulty practicing. But this group still went on to feel better at the end of 12 weeks of practice.

All this research illustrates just how much influence our body has on our mind. Modern life brings many things to be worried about, but, as Nestor writes, not being able to breathe remains one of our deepest and most primal anxieties. If somehow the way we’re breathing is signaling to our brains that something is wrong, it’s no wonder we feel anxious—and it’s no wonder that all these breathing techniques can bring such profound healing.

Kira M. Newman is the managing editor of Greater Good. Her work has been published in outlets including The Washington Post, Mindful magazine, Social Media Monthly, and Tech.co, and she is the co-editor of The Gratitude Project.  This article was originally published in Greater Good online magazine.