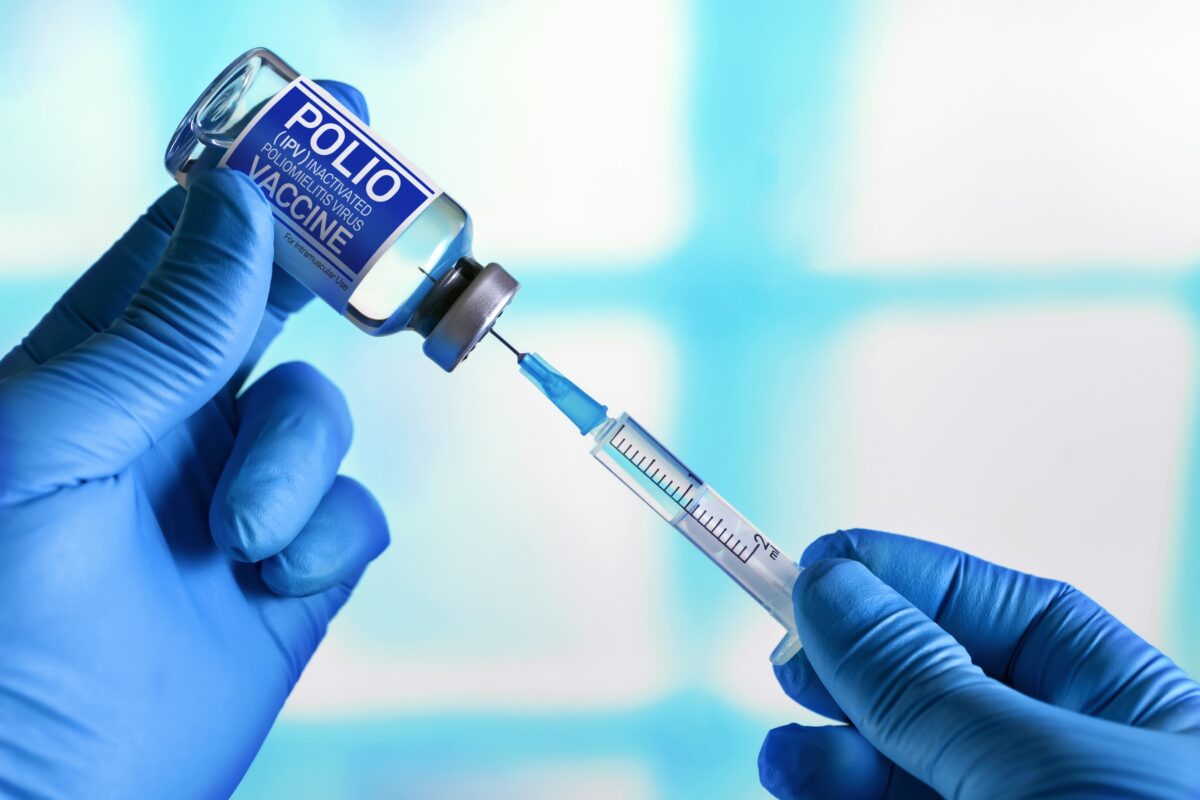 Almost all modern-day polio cases are caused by the vaccine strains.(angellodeco/shutterstock)
Health Viewpoints

Is the Latest Polio Scare Actually Caused by the Vaccine?

As if the ongoing pandemics of COVID-19 and monkeypox weren’t enough, they’re now urging people to get vaccinated against this contagious disease, as the virus has been found in wastewater samples. Yet, here’s what they’re not telling you about the real cause.

As if the ongoing pandemics of COVID-19 and monkeypox aren’t enough, the New York health department is now urging residents to get vaccinated against polio, as the virus has been found in wastewater samples from two different counties.

Just two weeks prior to this, a 20-year-old in Rockland County was also diagnosed with polio.1 The case is reportedly the first in nearly a decade. The patient, identified as a “healthy young adult,” had not been vaccinated against polio as a child, and according to the New York health department, the positive water samples were genetically linked to this case. As reported by CBS News, August 5, 2022:2

“‘Based on earlier polio outbreaks, New Yorkers should know that for every one case of paralytic polio observed, there may be hundreds of other people infected,’ State Health Commissioner Dr. Mary T. Bassett said.

‘Coupled with the latest wastewater findings, the Department is treating the single case of polio as just the tip of the iceberg of much greater potential spread. As we learn more, what we do know is clear: the danger of polio is present in New York today’ …

Unvaccinated New Yorkers are encouraged to get immunized right away, the health department said. Unvaccinated people who live, work or spend time in Rockland County, Orange County and the greater New York metropolitan area are at the greatest risk …

According to the CDC’s most recent childhood vaccination data, about 93% of 2-year-olds in the U.S. had received at least three doses of polio vaccine. Meanwhile, adults who are not vaccinated would receive a three-dose immunization, and those who are vaccinated but at high risk can receive a lifetime booster shot, according to the health department.”

“It is concerning that polio, a disease that has been largely eradicated through vaccination, is now circulating in our community, especially given the low rates of vaccination for this debilitating disease in certain areas of our County. I urge all unvaccinated Orange County residents to get vaccinated as soon as medically feasible.”

What They’re Not Telling You

In the U.S., polio was officially declared “eradicated” in 1979, and its eradication was attributed to a successful mass vaccination campaign. What the New York health department is not telling you, though, is that when polio strikes these days, it’s almost always caused by a vaccine strain. In contrast to CBS, the CNBC actually mentions this in its report:3

“The polio strain the adult in Rockland County caught suggests the chain of transmission did not begin in the United States. The strain the individual contracted is used in the oral polio vaccine, which contains a mild version of the virus that can still replicate. This means people who receive the oral vaccine can spread the virus to others.

But the U.S. hasn’t used the oral polio vaccine in more than 20 years. The U.S. uses an inactivated polio vaccine that is administered as [a] shot in the leg or arm …

The polio case in New York is genetically linked to the Rockland County wastewater sample as well as samples from the greater Jerusalem area in Israel and London in the United Kingdom.”

This is what’s called a delayed lede. Hard-news ledes give you the what, where, when, why and how in the first sentence or two. Here, the key point of the article — the fact that reemergence of polio is caused by the oral polio vaccine — is hidden further down the article than most people bother to read.

Wild Polio Has Been Replaced by Vaccine-Induced Polio

The fact that an oral vaccine strain is responsible for the New York polio case is an important detail. As explained by Vox:4

“Genetic sequencing shows that the recent case was a vaccine-derived poliovirus strain. This means the circulating virus isn’t from one of the few remaining pockets of endemic wild poliovirus, but rather from one of the many more countries with polio outbreaks that mutated from an oral, live-attenuated vaccine …

Although the live-attenuated poliovirus vaccine almost never causes polio itself … the fact that it contains a live virus inevitably carries some risk, unlike inactivated vaccines.

When live-attenuated polio vaccines are given in a community that contains a high fraction of unvaccinated people, the modified virus can infect others, and with enough generations of spread, it can … mutate back into a new virulent strain.”

The fact is, vaccine-derived polio has been the main circulating polio in most developing countries for years. And always, the response to vaccine-induced polio is — more polio vaccine.

Cases of vaccine-derived polio have surged in recent years after global health authorities in 2016 decided to remove Type 2 poliovirus from the oral vaccine, leaving only Type 1 and Type 3.

The wild Type 2 poliovirus had been declared globally eradicated in 2015, and many felt it was unethical to expose children to a live poliovirus that no longer posed a threat.5 Moreover, the Type 2 portion of the vaccines was the source of most of the vaccine-derived strains that were by then causing paralysis.6

Children without any type 2 polio protection give the vaccine viruses the chance to circulate enough to regain paralytic powers. ~ STAT News

The change didn’t fix that problem, however. The live polio vaccine is still responsible for the vast majority of outbreaks.7 As explained by STAT News:8

“To understand the problem, you need to know some basics about polio vaccines — and, specifically, the oral vaccine, known as OPV. OPV contains the live but weakened viruses that Albert Sabin engineered in the late 1950s. This is the vaccine that is used in most of the developing world, unlike the United States, which uses IPV, or inactivated polio vaccine.

The strengths of Sabin’s vaccine … include: its pennies-a-dose price; its ease of administration; and the fact that the vaccine viruses spread from vaccinated children to others around them, which means vaccination campaigns protect many more children than just those the vaccination teams find.

Back in the day in the developing world, if you vaccinated some kids in a neighborhood, you pretty much vaccinated the neighborhood. But that last benefit, which was helpful when there were hundreds of thousands of polio cases a year, is a decidedly mixed blessing now.

The part of the oral vaccine that protected against type 2 viruses was removed in spring 2016 in a move synchronized around the world. Since then, the number of children with zero immunity to type 2 polio (and type 2 vaccine viruses) has grown daily. This cohort numbers in the tens of millions.

Most Polio Today Is Caused by the Live Polio Vaccine

Importantly, while the inactivated polio vaccine prevents paralysis, it does not prevent infection. So, even those who have received the inactivated version can be infected by a vaccine-derived poliovirus, and can spread it to others. In Africa, the response to polio outbreaks has been to go in and broadly vaccinate as many children as possible with the original Type 2-containing polio vaccine.

But while this seems to work regionally, unvaccinated children in neighboring regions suddenly become targets as the vaccine viruses start to spread. So, essentially, these efforts merely reseed the transmission chain. For example, India’s polio eradication campaign in 2011 caused 47,500 cases of vaccine-induced polio paralysis — a condition that is twice as deadly as wild polio.9 And, as noted by the Global Polio Eradication Initiative:10

“[C]irculating vaccine-derived poliovirus, or cVDPV … have been increasing in recent years due to low immunization rates within communities. cVDPV type 2 (cVDPV2) are the most prevalent, with 959 cases occurring globally in 2020.

Some believe the ultimate answer is a brand-new polio vaccine, and the Bill & Melinda Gates Foundation has spearheaded this development effort. Not surprisingly, upon hearing the news of a polio case in New York, Gates reminded his Twitter followers that “until we #EndPolio for good, it remains a threat to us all. The global eradication strategy must be fully supported to protect people everywhere.”11

Disturbingly, STAT News12 points out that “The plan is to use the vaccine under the WHO’s emergency use protocol, even before it is licensed.” Do children really need yet another experimental injection foisted into them? This seems like reckless folly at best. Be that as it may, this next-gen polio vaccine is predicted to be made available sometime in 2023.

Is the Official Polio Story True?

In “The Curios Case of Polio, DDT and Vaccines,” a guest-post posted to my Substack in February 2022, investigative journalist Tessa Lena takes a deeper look at the official history of polio. While polio is attributed to a viral infection, polio-like symptoms can also be caused by a number of toxic substances, including lead, arsenic and pesticides such as DDT.13

Indeed, DDT exposure may have been a major contributing factor to the polio epidemics of the 1950s. Lena cites a 1951 article14 by Dr. Ralph R. Scobey in the Archives of Pediatrics, titled “Is the Public Health Law Responsible for the Poliomyelitis Mystery?” in which he stressed that poliomyelitis “could be produced both by organic and inorganic poisons as well as by bacterial toxins.”

However, once polio was classified as a communicable viral disease, research into these other potential mechanisms ceased, as all funding for poliomyelitis research was “designated for the investigation of the infectious theory only.”

Interestingly, Scobey points out that the polio contagion theory was almost entirely based on work done at the Rockefeller Institute. Afflicted children were kept in the general hospital ward, and not a single case of transmission occurred between patients. This detail contradicts the viral theory of polio, but it was ignored and the declaration that polio is a viral infection was quickly accepted and never successfully challenged again.

Earlier this year I reviewed a book called “Turtles All the Way Down: Vaccine Science and Myth.”15 Almost half of the book, though, was the fraud of the oral polio vaccine. I convinced the author to allow you to download the material on oral polio for free. It is a fascinating story that greatly expands on what Lena wrote and I hope you enjoy it as much as I did.

The case of the polio vaccine is in some ways reminiscent of what we’re now seeing with the mRNA COVID shots. Over time, the shots make you more prone to COVID. At the same time, they pressure the virus to mutate at a rapid clip, triggering outbreak after outbreak of increasingly resistant SARS-CoV-2 strains.

Today, the original SARS-CoV-2 Wuhan strain has been mutated out of existence, and all infections are caused by variants created in response to mass injection. On the one hand, these variants have mutated into far milder and less lethal forms, but on the other, they’ve developed resistance against both natural and jab-based antibodies, resulting in seemingly never-ending rounds of infection.

A silver lining of the COVID jab debacle is that more and more people are taking a second look at the theory of vaccination altogether, and are coming to the realization that many vaccines don’t work, and that none have been properly tested for safety using inert placebo controls.