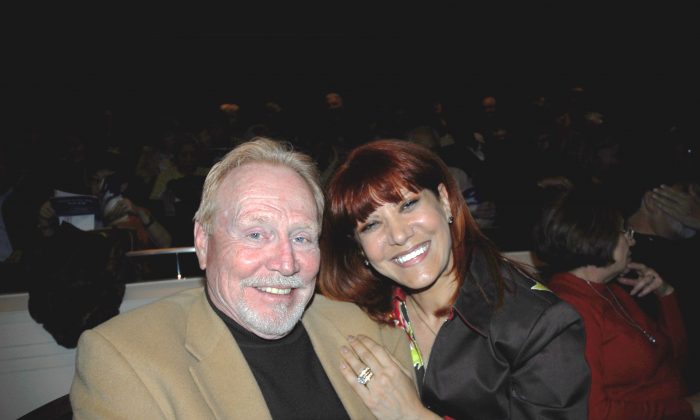 They both were enthralled by the performance.

“I love it,” said Mr. Ross, who is a real estate entrepreneur, president and CEO at Encore Resorts, LLC, and corporate broker at Welk Resort Group.

Not only was Mrs. Rahban-Ross impressed with all aspects of the performance, she was inspired by the vibrant colors, and mixture of colors seen in over 20 vignettes that transport the audience members on a journey through 5,000 years of China’s traditional culture.

“It is outstanding, outstanding. I love that. It’s the mixture of the colors, the hot pink and the blue, the yellow and the brown. Everything is perfect. I love it,” gushed Mrs. Ross. “I have my jewelry line, and want to use those vivace colors, and do something with it.”

Mrs. Rahban-Ross is an international interior designer, who is a graduate of Institut Paris-Modeliste, one of Europe’s top design schools.

Prior to launching Mojgan Rahbanoff Design, she was a senior interior designer for the restoration team of Mohamed Al Fayed, whose holdings include The Hotel Ritz and Chateau Windsor in Paris, properties in London, and Balnagown Castle in Scotland.

Mrs. Rahban-Ross is also the owner and jewelry designer at Nile Ltd.

But that is not all—in addition to being a philanthropist with multi talents and beauty, she was crowned Mrs. Nevada Global Nations 2015.

Shen Yun was established in New York in 2006 by a group of leading overseas classical Chinese artists with a wish “to revive the true, divinely inspired culture of China and share it with the world,” according to the Shen Yun website.

Shen Yun has brought back the best of these traditions, with the world’s foremost classically trained dancers showcasing stories and legends from Chinese history, a unique live orchestra with both Eastern and Western instruments, vibrant backdrops, colorful costumes, and inspiring musical soloists.

As a Buddhist, Mrs. Rahban-Ross was deeply connected with the traditional Chinese spirituality in Shen Yun. “It’s like you’re opening a door, and you walk in a dream. It’s fantastic,” gushed Mrs. Rahban-Ross. “As soon as they were talking about a practice of [Falun Dafa], and when I saw all the monks, I was in heaven.”

Falun Dafa is a traditional, spiritual meditation discipline. Its core principles are truthfulness, compassion, and forbearance.

She enthusiastically said, “I have 50,000 people following me, and everybody wants to know what I’m doing. I was just texting, and saying ‘Hey, this [Shen Yun] is something to see. Everybody has to come see it.'”

Mrs. Rahban-Ross said to the performers, “Bravo, and thank you for the perfection.”

‘I could not even blink an eye,’ Says Dentist

He was in awe of the exceptional ability of Shen Yun dancers, and wondered how they were able to attain that level of excellence.

“I could not even blink an eye, because I did not want to miss any single movement of the dancers. It’s perfect,” said Dr. Paleracio after watching the performance. “It is amazing. I cannot express the perfection of the movement.”

At the heart of a Shen Yun performance is classical Chinese dance. “Known for its incredible flips and spins and its gentle elegance, it is one of the most rigorous and expressive art forms in the world,” states the website.

The Shen Yun website explains that there is an inextricable connection between the arts and heaven: “Throughout history, almost every culture looked toward the divine for inspiration. Today, Shen Yun’s artists-dancers, musicians, choreographers, and composers, and the entire team-follow this noble tradition. For them, this spiritual connection is the motivation for striving to excel, is the heart behind each movement of the dancer and each note of the musician. It is why audiences can feel there is something different about Shen Yun.”

Dr. Paleracio was enchanted by the sound of Shen Yun’s music. “It’s very wonderful, relaxing. It’s a high form of art,” he said.

Dr. Paleracio had high praise for the performance, but the real treasure of the experience was the richness of traditional Chinese culture.

He was deeply moved by the spirituality in the performance: “The Renaissance [vignette] brings my spirit back to the divine, the creator. It really touches my heart.”

He was referring to the final vignette, The Divine Renaissance Begins, which depicts the Creator descending to earth to save humanity.

Dr. Paleracio emphatically concluded, “I love it, and I’m going to see it again, whenever it’s here, wherever it is. It’s super—super perfect.”

Dr. Paleracio loved Shen Yun so much that he wanted to share it with everyone.