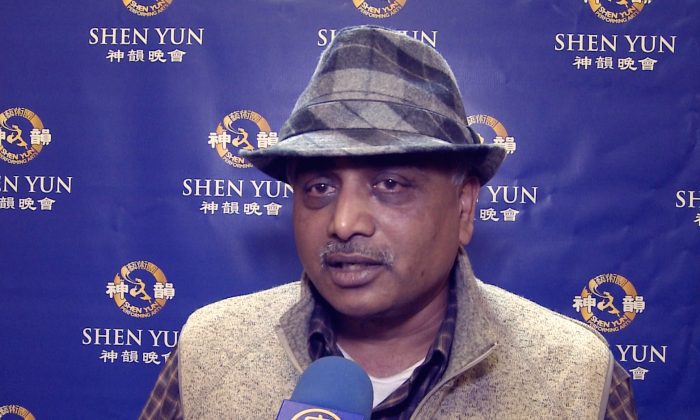 Madhukar Tallam experienced the wonder of Shen Yun Performing Arts at the San Jose Center for the Performing Arts, on Jan. 2, 2015. (Courtesy of NTD Television)

SAN JOSE, Calif.—”Excellent, excellent,” said Madhukar Tallam, a director at Intel Corporation, after experiencing the wonder of Shen Yun Performing Arts at the San Jose Center for the Performing Arts on Jan. 2.

He said he appreciated the insight into 5,000 years of Chinese culture and history, and Shen Yun’s journey through various ethnic regions.

“I think it’s good they made the journey throughout the country and picked up folk and ethnic songs and dances, and narrated stories using dances—which is great,” he said.

“[Shen Yun is] something interesting that you could learn a lot from, and understand that there are different things to China than what you see on TV.”

Based in New York, Shen Yun brings to the stage classical Chinese dance along with folk and ethnic dances as well as story-based dances. With an animated digital backdrop, breathtaking scenes and heavenly realms appear before your eyes, assisting the dancers in taking audiences on an amazing visual journey.

“I think the dances, the performers [are] very sophisticated,” Mr. Tallam said.

“It’s very good, very good—very smooth,” Mr. Tallam said of the orchestra. “You would think it’s very difficult for the two to merge, but they made it in such a way that both of them fuse very nicely.”

Shen Yun cannot be seen in China today, and Mr. Tallam felt that the Chinese people would benefit if they could experience this revival of Chinese culture.

“I wish there was a way to open it up to the people in China itself,” he said. “It would be great if people in China could enjoy it, too, because there is a lot more Western influence in China now, and it will help them to understand the kinds of things Shen Yun is doing outside of China.”