The unexpected freshness of ancient color and costume 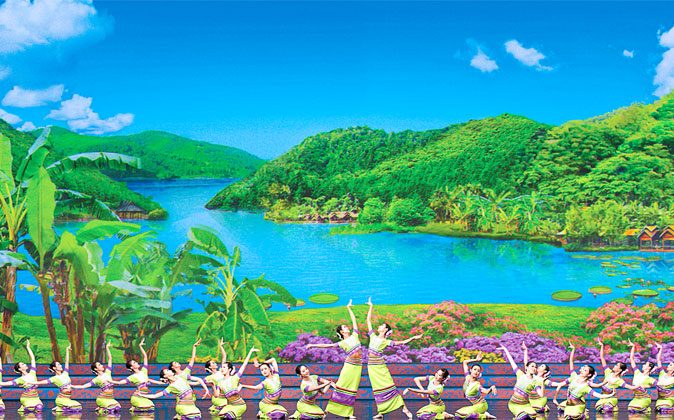 It all began with yellow.

The Yellow River Plateau is considered to be the cradle of the Chinese nation, and Chinese culture is said to have begun with the Yellow Emperor (Huang Di), who reigned 2698 B.C.–2598 B.C. At the end of the emperor’s life, a yellow dragon is said to have appeared and carried him up to the heavens.

Color has always played an instrumental role in China.

Throughout the millennia, Chinese people believed that their culture was divinely bestowed. They believed the five elements of water, fire, wood, metal, and earth created all things in nature, including color, and thus color was inseparable from the heavenly laws.

Color was rich in symbolism and used wisely. The philosopher Confucius applied the colors black, red, cyan, white, and yellow, to the traditional values of benevolence, righteousness, rites, wisdom, and trust. Emperors chose from these symbolic colors for their respective reigns based on the five elements and the Yin Yang theory. Colors were chosen based on the elements, the season, and their symbolic meanings.

This had been the case until the communist regime took hold and worked to replace such beliefs with atheism, class struggle, and a destruction of ancient values.

Red—the color of the fire element—was once used sparingly as a dot of paint to depict the eye of the dragon. Now, China is awash with red to the exclusion of all others colors.

Deep azure skirts turn into a glittering midnight sky, as dancers in costumes reminiscent of celestial phoenixes twirl and spin. Streams of celadon, gold, and orange are thrust into the air by the quick stepping performers in a celebratory northeastern folk dance.

Color is alive on stage as Shen Yun Performing Arts, poised to kick off its 2016 season, is at the forefront of a revival that showcases China’s true culture through classical dance and music.

Since the New York-based company began performing in 2006, artists and fashion designers among the audience members have been fascinated by the unique stage effect achieved by combining classical Chinese dance with colorful costumes, set against vivid backdrops. Audiences worldwide have noted Shen Yun’s unique and powerful artistic elements that combine an all-encompassing experience.

For instance, it is not every day that vivid greens and bright magenta are paired to an elegant effect. Fashion designers see Shen Yun, and the wheels of inspiration start to turn.

“These colors will give you life. Maybe I should change some of the color palette after seeing the show,” she said at the time.

Her handbags have been worn by celebrities, as well as being featured in magazines, including Vogue, WWD, InStyle, and Glamour magazine among others.

Azzurra Itri, Italian fashion designer and owner of OneSoul, saw a performance in Milan. “[Shen Yun] is always a great source of inspiration,” she said, because traditional Chinese dress showed the “ability to mix colors and fluidity of costumes in a truly innovative way, for us Westerners.”

It was the second year Ms. Itri had seen Shen Yun. Having seen a performance once, her expectations were very high. But Shen Yun puts on an all new performance every season, which means 400 new costume pieces, and Ms. Itri said the result was extraordinary. Through classical Chinese dance, the color and movement had created “a truly magical effect,” she said.

Celebrated designer Norma Kamali, who designs for dance herself, said, “I saw here the best example about how fabric, clothing, and sleeves can enhance the movement and tell the story.”

Babbie Lovett, a model and fashion show producer, said Shen Yun Performing Arts was the most aesthetic production she had ever been to. “I don’t think I have ever seen a more beautiful production,” said Ms. Lovett, seeing Shen Yun at Lincoln Center.

Through the Ages, Across China

“What I loved about the show was the authenticity of it. It was taking me on a journey to the many aspects of China,” said Ms. Karan, echoing a sentiment that many audience members have felt after watching Shen Yun performances.

A famous Chinese saying goes, “Each dynasty has its own court.” It refers to the fact that each dynasty brought with it new artistic expressions, including style of dress, architecture, crafts, and technical innovations.

The company’s website reminds us that ancient people believed that immortals from celestial paradises reincarnated as humans on Earth during different periods. They became the emperors, officials, scholars, and artists who brought to humankind gifts that would shape the land and its culture.

One of these divine gifts was celestial garb, depicted in many paintings of celestial fairies, Buddhas, Bodhisattvas, Daos, and other deities in their respective regalia.

The ladies of the Tang Dynasty court are depicted with golden skirts and wide, sweeping sleeves. The Manchurian princesses of the Qing Dynasty wore elaborate headdresses and elevated “flower pot” shoes in a regal, yet playful, dance.

The stage costumes have been adapted for dance, but their style maintains traditional elements and colors.

Shen Yun also pays homage in dance and costume to some of China’s ethnic minorities, which number over 50. For example, Shen Yun’s Mongolian dances have showcased the dress and headpieces that are a source of pride in Mongolian women’s wardrobes.

The Miao, or Hmong, is China’s fifth-largest ethnic group and one of the most ancient. Embroidered costumes in jewel-like tones and elaborate silver jewelry feature prominently in Hmong ethnic dances.

In performing a Miao dance, the strong sense of rhythm increases as the dancers move to accompanying drumbeats, and the abundance of the jewelry maximizes the jingling sounds it produces.

“It will have an influence on my next collection. It is so striking. The flow and the combination of the colors—the audacity to put together certain colors, that’s just amazing,” said Cristiane Belmonte, a fashion designer who saw the performance in Milan.

“The combinations are not common today,” said fashion designer Mary Duldouras after seeing a performance in Toronto in 2013. “There’s contrast in the colors … the movements were so beautiful with the dancers and the music working together in harmony. It’s very elegant.”

Michael Silvia, founder of THE SILVIA & GROUP, said the colors “are so striking and so beautiful, it just kind of expands your eye in terms of what a palette can look like.”

While the influences of these costumes are ancient and varied, the appeal for today’s artists and designers is fresh and universal. Every season brings a whole new wardrobe of 400 meticulously designed and carefully crafted costume pieces—a new well of color and inspiration for the audience to draw upon. Some have remarked that these colors have started to trickle onto the runways and, perhaps next, the holiday windows on Fifth Avenue.