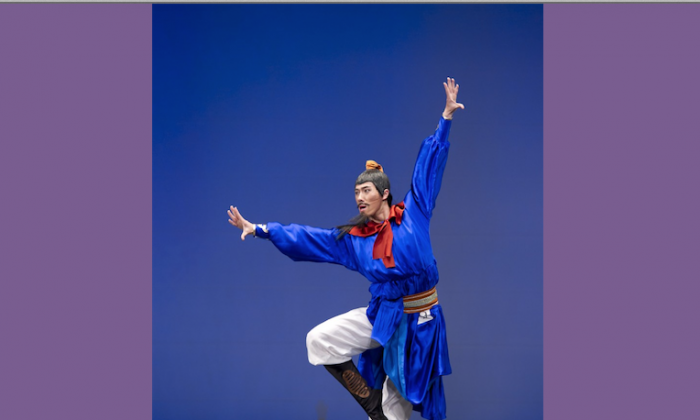 Tim Wu’s graceful flips give the illusion that he has transcended time’s restrictions. He leaps quickly with strength, then leisurely spins his body horizontally in midair. Landing hard from his high jumps, Tim’s new dance shoes will have holes by the end of the week.

Tim, 24, likes Arizona Green Tea and basketball. The difference between him and most of the other young “American-born Chinese” he grew up with is that he has spent years studying classical Chinese dance.

“I grew up in America, so apart from Chinese school on weekends, I didn’t really feel close to my own culture,” Tim said. “Dancing has brought me so much closer to my culture.”

Beyond challenging flipping and jumping techniques, classical Chinese dance is comprised of bearing and form. Bearing is the inner spirit; it focuses on breath and deep emotional expressions. It is a “cultural DNA,” an ethnic aura embedded within 5,000 years of Chinese civilization, leading the form.

“It’s not just about the dance, you have to spend time learning about the culture too,” Tim said. “The hardest part of Chinese dance is grabbing the essence of the movements.”

Tim’s most memorable dance was his solo as Wu Song, a character from Outlaws of the Marsh, one of China’s four literary classics. Wu Song saves a village from a tiger, killing it with his bare hands—while drunk.

“This is the most interesting role I’ve ever played because I don’t drink,” Tim said.

Tim has spent hours watching videos and imitating movements in the mirror. He described the feeling as “being off-balance but at the same time being in control of everything.”

Classical Chinese dance not only portrays the transformations of one’s innermost emotional state, but also daily activities from all walks of life.

From Manchurian princesses walking on dainty shoes with heels in the middle, to monk Xuan Zang, who walked to India to bring Mahayana Buddhist scriptures to China, classical Chinese dance portrays a wide spectrum of Chinese culture.

“If you don’t know a character’s history, or what he’s been though, then you won’t be able to portray that character well,” said William Li, also a classical Chinese dancer.

William and Tim dance in Shen Yun Performing Arts, a classical Chinese dance group based in New York. A group of overseas Chinese artists created the group in 2006, with a mission to revive the 5,000 years of Chinese culture.

“Ji Gong is a very eccentric character. He led a tragic life. The death of his wife and family led him to become a monk,” William said.

Although Ji Gong does not follow temple rules—he strictly abides by Buddhist fundamentals. Ji Gong is able to let go and remain light at heart, despite his sorrowful life.

“It’s easy for me to portray characters such as Ji Gong because he’s always happy no matter what,” said William. “Some people get face cramps when they smile for too long, but it’s natural for me.”

The performers are unable to see the audience on stage. “It’s an open black space and I just focus on the character I’m trying to portray,” William said.

Classical Chinese dance also incorporates folk and ethnic dances. China officially has 55 ethnic minorities, each with a distinct style of life. The differences between the groups result from topography, climate, and religious tradition, which all show in their dancing.

Tim especially likes performing the Mongolian dance. “It’s a very big and manly flavor,” he said. “We’re riding horses in the desert and imitating eagles” as dance moves. “It’s a lot of fun.”

Meanwhile folk dances are popular styles passed down from the majority Han ethnicity, such as the Yang Ge and ribbon dances.

Ancient Chinese people followed the Daoist principles of yang gang, which translates to a bright masculinity, and yin ro, which means a feminine softness—in other words, the division of Yin and Yang. This cultural code of behavior has left a strong impression on Chinese dance.

That is, except for the Yang Ge folk dance.

“Yang Ge is my favorite,” William said. “It’s a silly and fun dance, with lots of quick, small movements.”

The Yang Ge atmosphere is goofy and happy, to represent farmers celebrating a plentiful harvest. The quirky movements imitate daily life activities in the countryside, such as “rolling up the sleeves.”

“The competition is about more than bringing people around the world together to dance,” said Alison Chen, also a Shen Yun artist. “It’s more of an exhibition that shows different stories and figures from different parts of Chinese history.”

The NTD dance competition is the only international, independent platform for classical Chinese dance. It shares the same mission as Shen Yun—to revive a culture that was attacked and suppressed during over 60 years of Communist rule, especially during the Cultural Revolution.

“The atmosphere at the competition is really encouraging,” said Faustina Quach, who won silver in 2010.

“You’d think people would be competitive but they’re not,” she said. “Our mission is to show people the beauty of classical Chinese culture and dance—that’s what we’re all here for.”