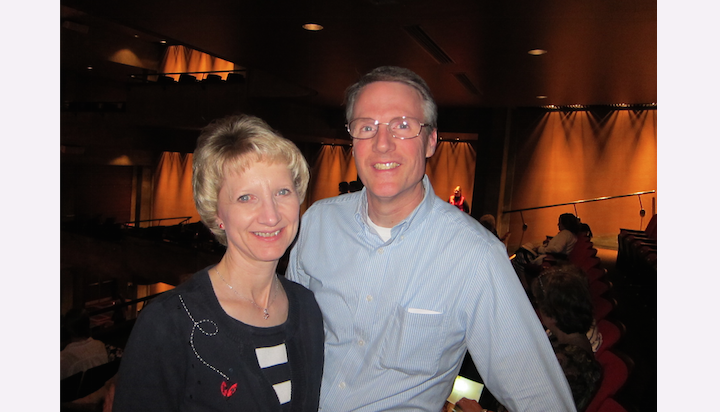 INDIANAPOLIS, Ind.—It is another beautiful Midwestern day in Indianapolis, Ind., as the grass is greening, the trees showing their first signs of bloom, and as Shen Yun returns with its portrayal of traditional Chinese dance and culture.

Chris Derby, a legal assistant, who works is New Haven, and Matthew Derby, who teaches physics and chemistry at Mid New Haven High, both came to see Shen Yun.

Matthew, in addition to teaching science, has been directing the school’s plays and musicals for 30 years. He has produced and directed many musicals and plays.

“I think it’s very interesting how it’s put altogether,” Matthew said. “I’m very impressed by the quality of the dancing and the synchronization—how smooth it is. Working with high school kids, trying to get to be this smooth, [we’ve] got a long way to go.”

One of the things that makes Shen Yun unique is its use of a digital backdrop which utilizes animation and motion graphics to help tell the stories.

“It’s very well done,” continued Matthew. “It’s beautiful. The costumes are gorgeous, and the blending of the technology with the screen the video screen, it’s really, really cool!”

In addition to being a legal assistant, Chris helps create the costumes used in Matthew’s high School musicals and plays.

Shen Yun has a deep spiritual side to the show, which the audiences usually pick up on quickly.

“It’s kind of neat to see their interpretation in dance of respect for the spiritual aspect,” Chris said. “I thought the contemporary number was very interesting—that they added that. I didn’t expect that.”

“I’m not particularly well versed in that religious view, so it’s kind of interesting to see that perspective,” added Matthew. “There are certain aspects that are universal, religious views that have the dignity and respect for people.”

“The show was very well put together,” commented Matthew. “It’s very worth seeing.”

“I’ve been really impressed with the dance and the strength of the performers,” added Chris. “He [Matthew Derby] said ‘wow it’s been an hour’ and I thought, oh my goodness that’s hard to believe that’s gone so fast. It’s been very enjoyable to watch.”