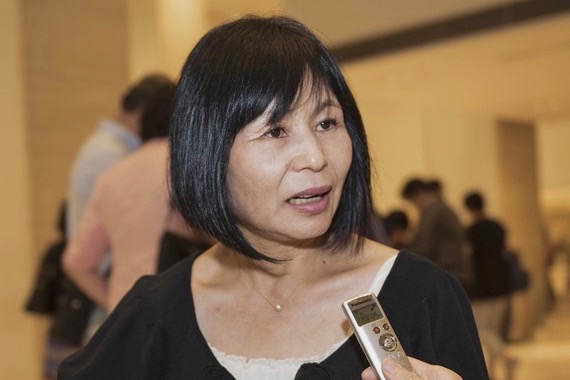 TOKYO, Japan—With much excitement and anticipation, Shen Yun Symphony Orchestra officially began its 2016 season with a matinee performance in Tokyo on Sept. 15. In the audience was Miyosa Takahashi, a radio station host, who found herself completely lost in the music.

“I felt touched in an extraordinary way … from the top of my head all the way to my toes,” said Ms. Takahashi, after seeing the performance at Tokyo Opera City Concert Hall.

She was still thinking about the music she had heard as she was being interviewed. “No words can express how I feel.”

She recalled how she had doubts before coming to see the performance—doubts that traditional Chinese music could be expressed through a Western symphony orchestra. Her doubts had disappeared. She explained “I found [the music and the symphony orchestra] just combined perfectly. It was really wonderful.”

Shen Yun Symphony Orchestra blends Western instruments with traditional Eastern ones. The orchestra serves as a foundation that helps to accentuate the sounds of the Chinese instruments, according to the company’s official website.

The symphony orchestra treats the audience to original Chinese melodies and Western classical favorites, as well as solo performances by vocalists. And Ms. Takahashi distinctively remembered one Chinese composition in particular.

“The piece that describes the grassland was magnificent,” said Ms. Takahashi, who was referring to the piece that brought to life the simple but vigorous life on the vast grassland of Mongolia.

“I felt uplifted and embraced by a powerful energy,” she said.

Also grabbing her attention was a music piece about the indigenous people of Taiwan. She explained, “It was cheerful and vigorous. While I was listening to it, my body moved spontaneously with the melody.”

It was much more than just music that had left Ms. Takahashi in amazement. She also noticed the devotion of the musicians when they were performing. “They were so immersed in their performance that they seemed to become part of the musical instruments.”

As for other major aspect of the performance—the vocalists who use bel canto technique to sing Chinese texts—Ms. Takahashi was also full of praise.

“Their voices were so sonorous. I don’t know how they could produce such sound. It filled the whole theater.”

According to Shen Yun’s website, the bel canto technique, a commonality between ancient Chinese theater and early European opera, is believed to produce the most beautiful and pure tone of voice. The technique, now lost in modern China and Europe, is being revived and put on stage by Shen Yun.

Ms. Takahashi did not want to walk away without mentioning how she would personally introduce the performance to her friends:

“You just have to go and listen to it!”