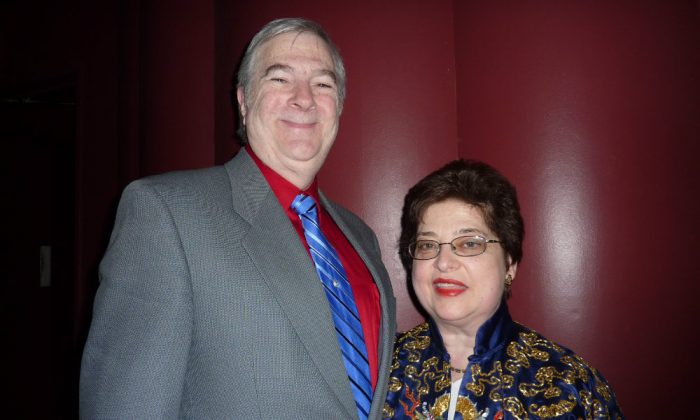 NEW YORK—The music in Shen Yun Performing Arts inspired ice skating director Karen Cohen-Prosnitz so much that she purchased a CD and plans on choreographing routines to it.

“I’m sitting there thinking which little girl I can picture doing something very peaceful with this music,” Mrs. Cohen-Prosnitz said after the Sunday evening performance at Lincoln Center’s David H. Koch Theater. “So I really enjoyed and appreciated the music.”

Mrs. Cohen-Prosnitz started ice skating when she was 6 years old, and continued for many years. She later transitioned to teaching, and now works at the Ice Vault in Wayne, New Jersey. As a coach, Mrs. Cohen-Prosnitz trained many skaters who compete both nationally and internationally.

Shen Yun, a New York-based company, presents ancient Chinese culture on stage. “Through the universal language of music and dance, Shen Yun weaves a wondrous tapestry of heavenly realms, ancient legends, and modern heroic tales, taking you on a journey through 5,000 years of Chinese culture,” the company explains on its website. “Its stunning beauty and tremendous energy leave audiences uplifted and inspired.”

Mrs. Cohen-Prosnitz noted that the handcrafted costumes and the unique orchestra, along with the digital backdrop, was “very seamless.”

“It was beautiful, a beautiful show—very moving, I enjoyed every part of it.”
— Karen Cohen-Prosnitz

“It was beautiful, a beautiful show—very moving, I enjoyed every part of it,” she said.

The digital backdrop enables Shen Yun to transport the audience to other realms.

“With state-of-the-art graphics technology, Shen Yun’s digital-backdrop team creates vividly animated settings, extending the stage and transporting the audience to a world where heaven and earth are one,” according to the company website.

The Shen Yun Performing Arts Orchestra is also unique because it harmoniously blends the disparate sounds of East and West to create a fresh sound that many audience members have come to admire.

Mr. Ted Prosnitz, Mrs. Cohen-Prosnitz’s husband, is a cantor and a member of the clergy at The Jewish Council of Cedar Crest in Prompton Plains, New Jersey. He also enjoyed the show, saying that he has been fascinated with the culture and the history of the Middle Kingdom since he was a little boy, and loves the legend of the Monkey King, part of which is told in one of the dances.

Mr. Prosnitz said of the Chinese culture: “I think that they’re very rooted in connection between heaven and Earth and people, so I can understand the connection.” He also appreciated the variety of ethnic dances from different regions of China.

Ms. Laura Garcia, an intellectual property attorney for Universal Music in Mexico City, was also in the audience on Jan. 12. She, too, was pleasantly surprised by the show in its variety of dances.

“For me, it’s very impressive to know that culture of China,” said Ms. Garcia, adding that she also enjoyed the beautiful costumes and the music.

Ms. Garcia thought that the Chinese culture presented in the performance was “very in touch [with] the spirit and feelings.” She took from the experience a spiritual message: “That you have to think and act through your heart in every step of your life.”