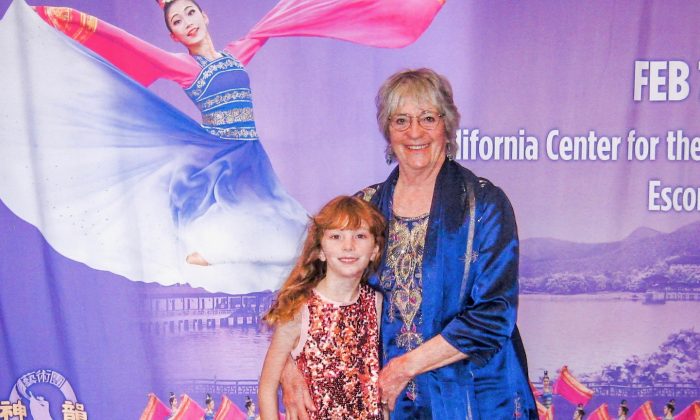 ESCONDIDO, Calif.—Jayelle Sargent, a retired agent for cinematographers on featured films, took her granddaughter Pearl to the matinee performance of Shen Yun Performing Arts at the California Center for the Arts on Feb. 16.

Sargent said she first attended Shen Yun a few years ago, but she wasn’t able to bring her granddaughter at that time. However, after this performance, they promised each other they would come back every year together for Pearl’s birthday.

“It’s beautiful, the costumes and the colors,” said Sargent. “I told so many of my friends about it. … It’s wonderful, and I would stand on a street corner and encourage people to come see it.”

Shen Yun was founded in 2006 in New York with the hope of reviving the 5,000 years of authentic Chinese culture, which has been nearly lost amidst decades of communist rule.

The performance features classical Chinese dance, a full live orchestra with both Western and Chinese instruments, two charming bilingual emcees who share tidbits of Chinese culture, and much more. Every year, the company creates an entirely new production.

‘I’m blown away with the effects’

Sargent said when she worked at her agency, she represented cinematographers who created visual effects on major films, such as “Lord of the Rings” and “The Matrix.” When she first saw Shen Yun a few years ago, she said she was stunned by the effects on the interactive digital backdrop behind the performers.

“I’m blown away with the effects,” Sargent said of Shen Yun. “They are magnificent. I have to say I think that is part of my favorite, only because they do it so beautifully.”

Sargent said she was particularly impressed with one dance vignette, where a performer appeared to dive into the water on the background screen.

“I couldn’t believe that was not real water,” she said.

Young Pearl also enjoyed the performance, saying it was “fun and cool.”

When Sargent was asked about the divine aspect of traditional Chinese culture demonstrated in Shen Yun, she said it was a very positive thing.

“I think anything that helps this fractured world find its heart again,” she said. “I think it’s wonderful. I think we need that.”

After watching Shen Yun, Sargent felt inspired to renew her own spiritual practice. She also said it’s difficult to fully explain the Shen Yun experience to others.

“Seeing it again, I realize you can’t really tell people,” she said. “You have to experience it. It’s a once in a life experience.”

With reporting by Sophia Fang and Sarah Le.