‘I Would Bring My Whole School If I Could!’ Says School Owner 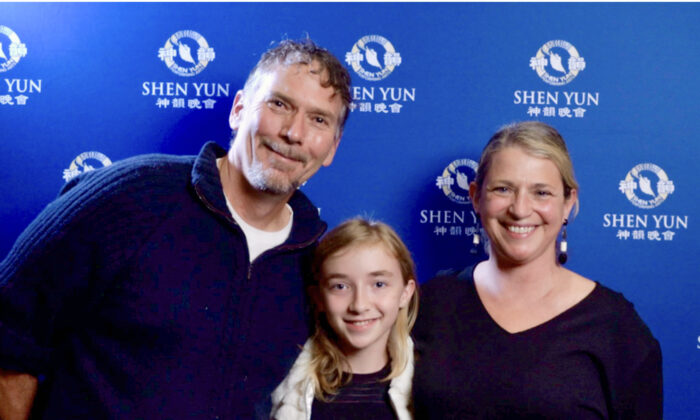 The O'Neill family at Shen Yun Performing Arts at the Keller Auditorium, in Portland, Ore., on Oct. 9, 2021. (NTD Television)

PORTLAND, Oregon—Shen Yun Performing Arts was the first performance that Joe and Kristin O’Neill, owners of the private middle school Wildwood Academy, have seen since the pandemic began.

“I absolutely love it. It’s one of my favorite shows,” Mr. O’Neill said alongside his family. “We try and come every year.”

He loved the costumes and the history as well as the state-of-the-art graphics technology creating an atmosphere that takes the audience back through 5,000 years of Chinese culture and history.

“The special effects are amazing,” he said.

[T]he moment I sat down and saw those costumes, it lifted my spirits.
— Kristin O'Neill

Ms. O’Neill, who is an artist, said the performance was just the right thing to lift the mood in the pandemic. “[T]he moment I sat down and saw those costumes, it lifted my spirits.”

She added of Shen Yun, “We really love it. We love the beauty of it and how engaging it is. We love seeing the culture of the show … how different the sets are from shows [you] normally see in America.”

When Mr. O’Neill mentioned the private school that he owns, he said, “I would bring my whole school if I could!”

“I just think all of it is encompassing and to also understand that performances like this aren’t being seen in China. I would love for my students to know the story,” she said.

Mr. O’Neill said that Shen Yun is a great way for people to experience “true Chinese culture, true Chinese heritage … the philosophy, [and] everything else.”

“Everything gets so politicalized these days,” he said. “This is just more about art, culture, [and] they throw in a little bit of spiritual content, which I love—it’s great.”